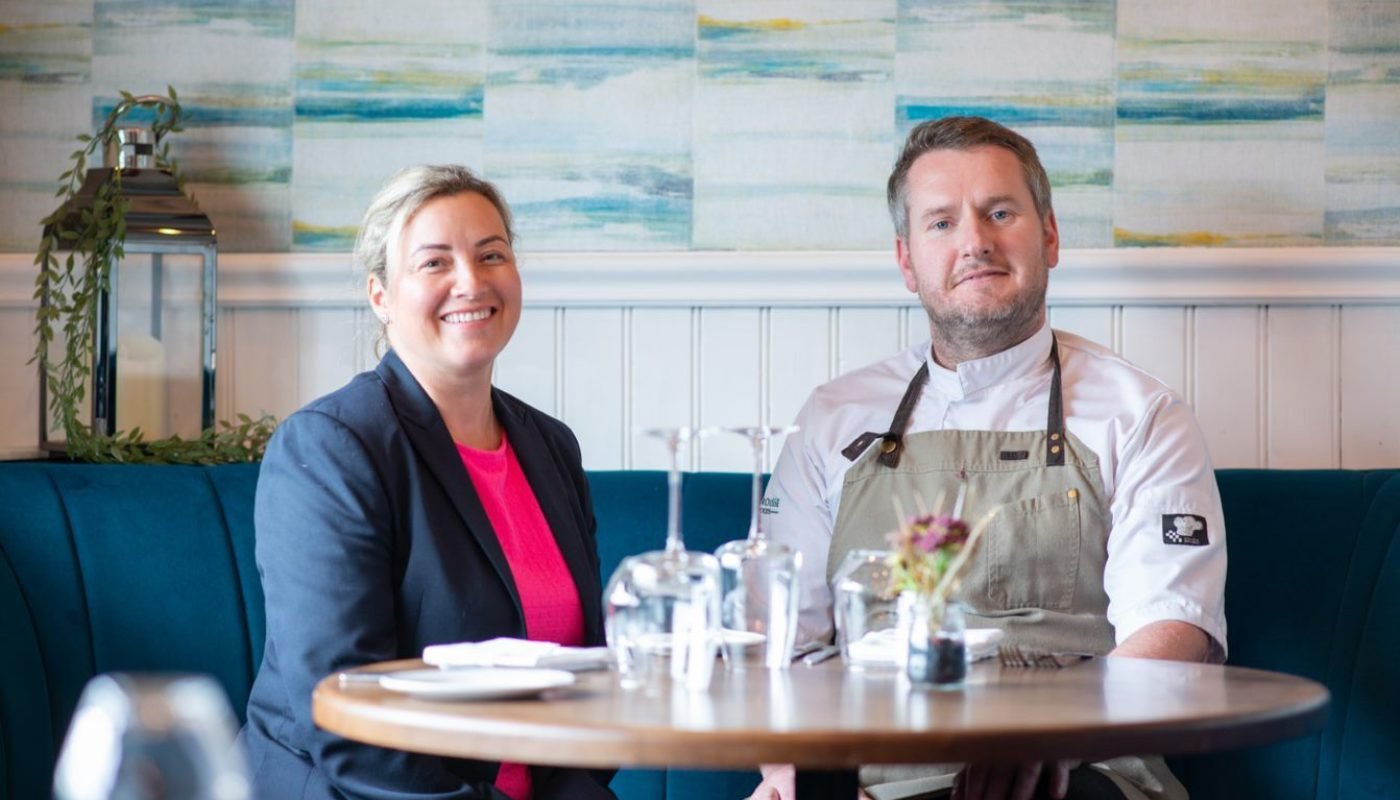 There was no other way for Karl Breen to be anything other than a chef. Now the chef/owner of Wild Thyme Restaurant in Threemilehouse, located (yes, you’ve guessed it) three miles outside Monaghan town, at the age of 15, he started as a kitchen porter in the local hotel close to his family home in Lurgan, County Armagh, and from the moment he set foot in the kitchen he knew what career he wanted to pursue.

“I had no doubt that I wanted to be a chef – the buzz, noise, madness and hysteria of it all pulled me in.” As the years passed, Karl’s passion for food intensified, while his thirst for knowledge of all aspects of food developed to the point where he embarked on a career journey that few other chefs could match. The list isn’t endless but it’s certainly impressive: in Ireland, Karl worked in Knockranny House Hotel, Gregan’s Castle Hotel, Locks Brasserie, The Greenhouse, Castle Leslie Estate, and Nuremore Hotel, graduating across those properties from chef to Head Chef and Executive Head Chef. A stint in the Emirates and Saudi Arabia included the Executive Head Chef position at Verdure Restaurant, and it is from then to now that the story of Karl’s most recent venture (in partnership with Sinéad Flynn) starts.

“I came back to Ireland from the Emirates for a holiday, and you know when you have that feeling in your head of enjoying being home? I was helping my brother move house, and I just started searching for jobs closer to home and that’s when I started as Head Chef at Castle Leslie Estate.”

As with everything from March 2020 onwards, levels of disruption interrupted everyone’s best laid plans, but Karl and Sinéad emerged relatively unscathed with a plan that had been forming for many years: to open their own restaurant. It is, says Karl, the dream of every chef, and when the pandemic arrived it gave the couple the opportunity to seriously consider their options. “Sinéad, being the HR Manager she is, asked me where I thought I would be in my career in 10 years, and so I thought that now is as good a time as any to take the leap. My ambitions were big, but I began to put the steps in place to make my dream reality.”

Discussions began and ideas were regularly sifted through as they weighed up the negatives against the positives. A geographic priority was to remain close to home, so Karl and Sinéad assessed the locality and inherently knew there was potential for a restaurant of their dreams in County Monaghan. Initial thoughts of opening in Monaghan town changed in December of 2021 when they noticed a vacant property, a former pub, in the village of Threemilehouse. It all happened from there, explains Karl.

“It was a very old building, one of those you see that has genuine character and charm, a quaint country feel with high beams and cosy corners. The bar closed when Covid arrived, and when the lockdown restrictions came in March 2020, the landlord just turned the key in the door and walked away. On the day we looked at it, the glasses from the last night it had been open were still on the counter and the bar optics were full! The potential was endless, and the big question was whether it was the best time to open a restaurant with the increase in costs of food, energy prices and shortage of hospitality staff. But then we thought, is there ever a right time? Of course, we fully renovated it, took out the games machine and the pool table, put in a commercial kitchen, and commissioned a local designer for the interior.”

Design and colour tones for the contemporary restaurant were crucial, says Sinéad. “We had the colour green in mind because we really wanted to reflect the freshness and naturalness of the food offerings as much as possible. And, of course, that colour is strongly associated with where we are, where we live, our environment.”

Wild Thyme Restaurant has been open since April and, says Sinéad, is making its mark in the way they had planned. “We’re doing great, initially by word of mouth and increasingly by reputation and advertising. We have people saying how they heard about us from their friends as well as from authorities such as Monaghan Tourism, which recently included us in an article of the best three fine dining experiences in the county (“an exciting recent opening that is already receiving rave reviews”). It’s good for us to be recognised in such a way, especially since we are not open that long. The bookings are starting to increase, particularly in the lead-up to Christmas.”

Both Karl and Sinéad feel Wild Thyme Restaurant can become a destination restaurant. “We’re close enough to Belfast and Dublin,” advises Sinéad, “not to mention the likes of Enniskillen, Dundalk and many other places. I don’t think Monaghan is particularly known as a foodie destination and we want to change that by putting Wild Thyme Restaurant on the map.” People travel for good food, says Karl, adding there’s no dispute about their ambitions. “We want to be the best in Monaghan, at the very, very least. We want to be up there with the likes of Ox and Deanes in Belfast, and bring the foodie experience to County Monaghan.”

The menu, reveals Karl, is seasonally based and so will change at regular intervals. It’s all about striking the right balance of retaining regulars and attracting newcomers, he reasons. “It’s an expanding menu but it isn’t extensive, and some customers have been here approx ten times already, which means we are definitely building up a steady clientele. We want to use produce that other restaurants around Monaghan aren’t, and in doing so put our distinctive stamp on what we offer, and this is where Wild Thyme Restaurant will exceed expectations.”

Such a quality-driven approach can be experienced throughout the restaurant’s menu and its wine list, the latter of which is a collaboration with Dublin-based Cassidy Wines, which, says Sinéad, “pair wines with each and every one of our dishes in order to get the best combination. We’re also quite conscious of offering reasonably priced wines that are the best quality for money. We will, of course, be increasing our wine lists as the weeks and months pass by.”

Pricing, of course, is a crucial element of everything these days (and even more so in 2022, for obvious reasons). When you’re opening a new business, cautions Karl, you don’t want to price yourself out. You want instead, he says, “to build a customer base that you can bring on the journey along with you. Wild Thyme is a long-term project for myself and Sinéad, and because of that we know things aren’t going to happen overnight, but our instincts, combined with our experience, tell us the charm of a small village restaurant serving great food sounds perfect. Wild Thyme is a city-style restaurant in a rural location that appeals to everyone, including those people who have returned home from large cities outside of Ireland over the past two years and who now work from home. These people have been used to a certain style of restaurant and they find that at Wild Thyme Restaurant.”

Karl concludes pragmatically, like any great restaurant, Wild Thyme Restaurant is for everybody. “Foodies and non-foodies alike, and for those that just want to have a snack and a glass of wine. Or a cocktail or two, which many people have told us are the best they’ve tasted this side of London!”

Wild Thyme Restaurant at the Inn,