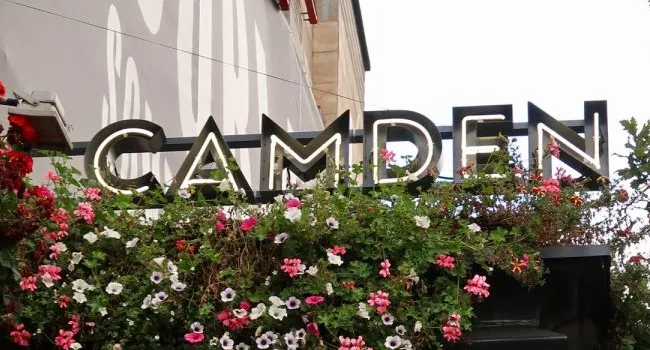 “I’d like to introduce you to the hardest-workin’ band in the world. On bass, Derek “Meatman” Scully. On piano, Steven “Soul Surgeon” Clifford. Dean “Mr Nipple” Fay on sax. Joey “The Lips” Fagan on trumpet. Our gorgeous chanteuses are Bernie, Imelda, and Natalie. Deco “Deep Throat” Cuffe on vocals. On lead guitar, Outspan “Fender bender” Foster. Finally, on drums, Mickah “Don’t Fuck With Me” Wallace. Ladies and gentlemen, The Commitments.” In 1991 Jimmy Rabbitte introduces us to a gang of misfits brought to life from the pages of the Roddy Doyle classic that will live long in Irish film history. The backdrop for large parts of the film is the once “Camden Deluxe” cinema which in more recent times has been known as “The Palace”, one of Dublin’s busiest late night venues also incorporating “Planet Murphy’s bar and snooker hall”.

Over the last three years, it’s closure has added to the concern surrounding Dublin nightlife but rumours recently have been generating interest that something quite special is on coming to the massive Camden Street complex. A massive sign draped above the old theatre entrance confirmed the suspicions and The Camden finally opened its doors last week.

The Murray Group who already operate one of Dublin’s largest sports bars The Living room has turned this once famous dance floor into a multipurpose venue like no other this city has ever seen. There is no mistake this is a sports bar first and foremost as you will find 87 high definition screens playing a variety of different live games from around the world. It is when you make your way past the 360-degree bar and down the steps to the main viewing area you eyes are really in for a treat. A massive 4k HD television (one of the largest indoor of its kind in Europe I am told) is mounted above another large bar and takes centre stage for this sports fanatic haunt. The area directly in front of the screen is lowered to the rest of the ground floor and one might even think they are in a stadium when they look up to see a screen that runs around the balcony above not unlike a basketball arena advertising board. The lighting rig that hangs above would not look out of place at a U2 concert and we are informed that Thursday to Saturday the tables in that area are removed and you will now be standing on a late night dance floor once again. The dance floor is surrounded by impressive red leather booths which are plentiful throughout the bar and when we move upstairs into “The Brewery bar” we see more of the same booths and another spectacular bar made up of decoratively with Jameson Bottles and lighting that drifts into a different colour every few seconds. Situated also on this level is surely one of the most unique and coolest features of any bar in Ireland. The Five Lamps Dublin Brewery is on show for punters to view while sipping on one of the five different draught offerings on the bar from the Five lamps brand. The fast becoming Dublin favourite Five Lamps can is also available to purchase along with beers from 25 individual taps on a quick count along one bar.

Another staircase leads up to a podium that’s use can only be guessed at this stage but its the glass window behind that intrigues. Peer through and you will see what is a 60 seater private cinema that can be rented out for those special club days or even just an intimate movie night. Noel & Annie’s Speakeasy bar is another private space designed using vintage fixings from the old Longstone Bar once of Townsend Street. It can be rented out for private parties this Christmas period and also has a pool table paying homage to that once was before.

Food is served 7 days a week breakfast, lunch and dinner with a mixture of main courses, pizza and platters one might expect to see in a sports bar. We tried the “Meaty” and “Vegetable” platters €14.95 each and served two people. A larger platter for 6 people can be purchased at €34.95. Although the reading of the platters promised much on the menu we found they were very average, deep-fried for too long and even had items missing or advertised poorly. We will put this down to teething problems in its first week and as a positive, the Pidy spiced cups with pulled pork proved to be something of a delicious Mexican Won Ton creation. Desserts were a mixed bag too with the Eton Mess Meringue Pie €8.95 being quite nice at first but then realising the meringue had bits of “crackling-popping candy’ added to it. Something that shouldn’t be in a dessert for anyone over the age of 10. The Guinness brûlée €8.95 divided opinion between me and me and companion. Landing on the table flame still lighting the caramelising sugary top I waited patiently and then dug into the Guinness flavoured custard. The alcohol is pungent and while I found that ok I could see how other faces could sour upon the taste. The Real Strawberry Daiquiri €11 was fresh, delicious and quickly vanished and the Gin Smash €11 a big bang of orange and lemon. Although there seemed to be an overload of staff we waited over 15 minutes after ordering our drinks for them finally to arrive but we will once again put that down to teething problems. The aforementioned Jimmy Rabbitte is the name above the door on the popular bar next door and can be entered through a sizable communal smoking area decorated with signs including the names of the other bars in the Group like Fibber Magee’s and Murray’s that also share a vast outdoor space.

The Five Lamps brewery will soon be giving tours and I expect much more to be announced from The Camden in coming weeks and months. Our visit, even on only its second Tuesday open with no significant football on tv there was still a decent atmosphere around the place and we can imagine this being a big part of Dublin for many years to come as Camden Street becomes more and more the place to be.

Somewhere to watch the match this weekend? Check out Dublin’s most impressive sports bar out, The Camden.

More Photos from Our Visit 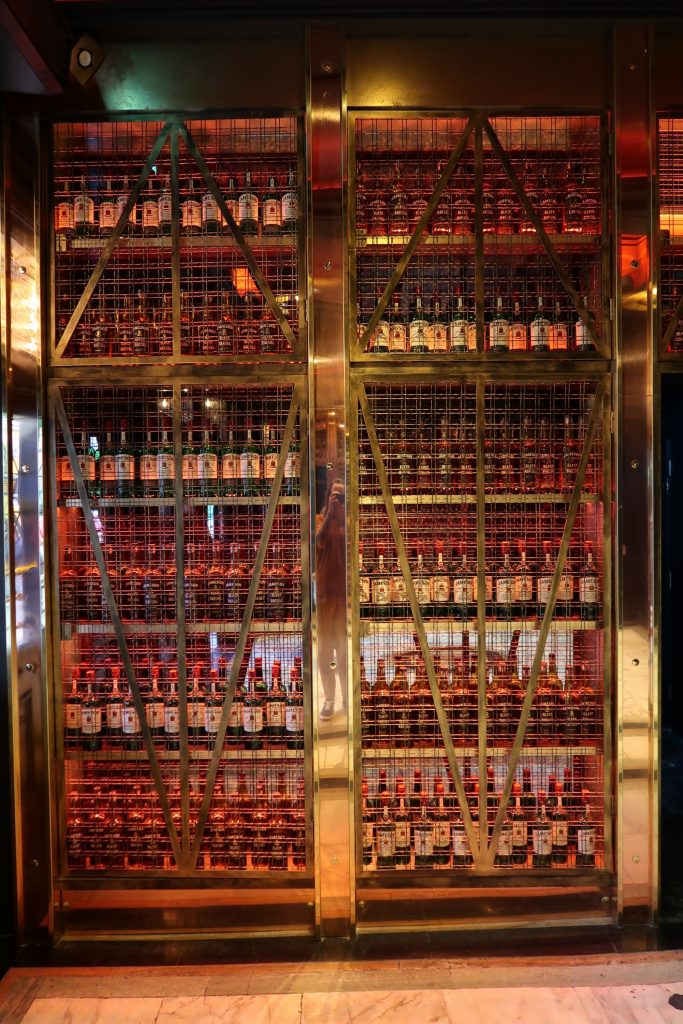 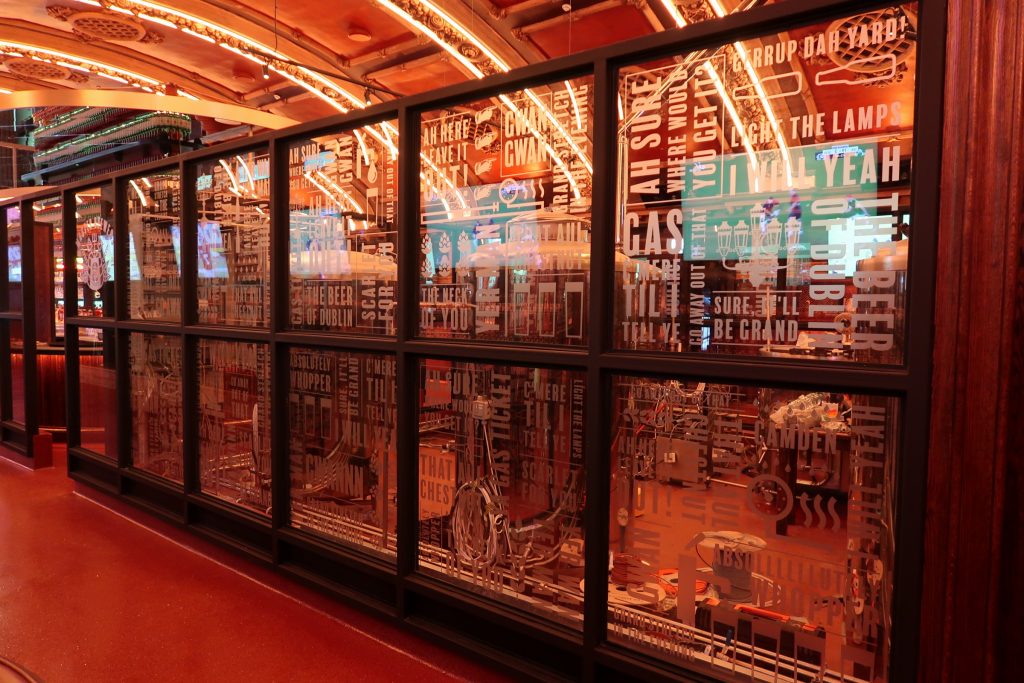 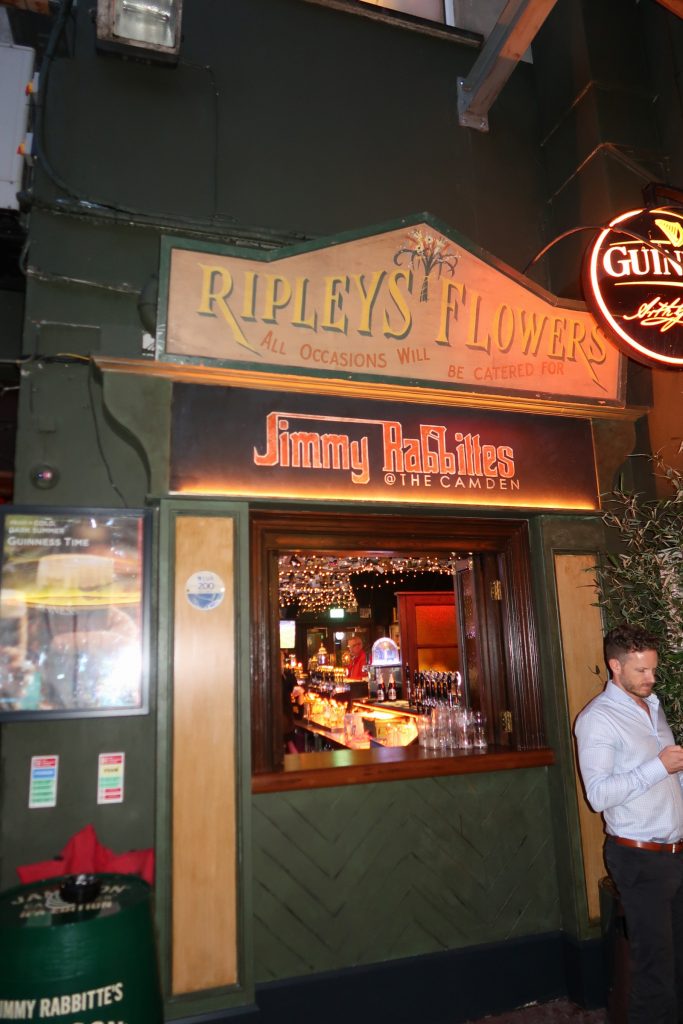 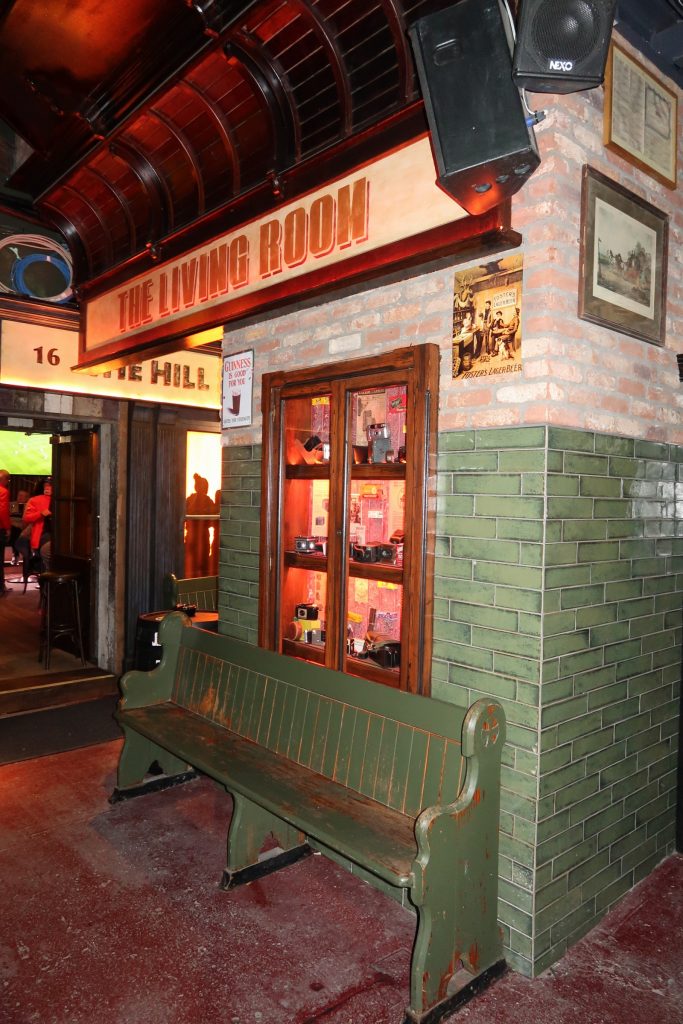 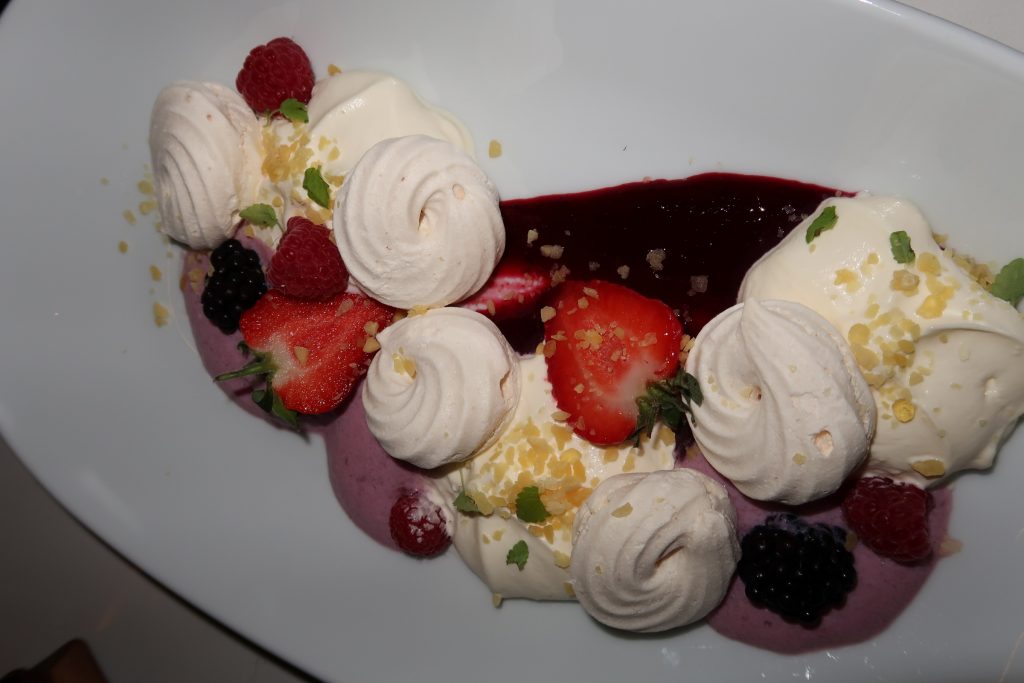 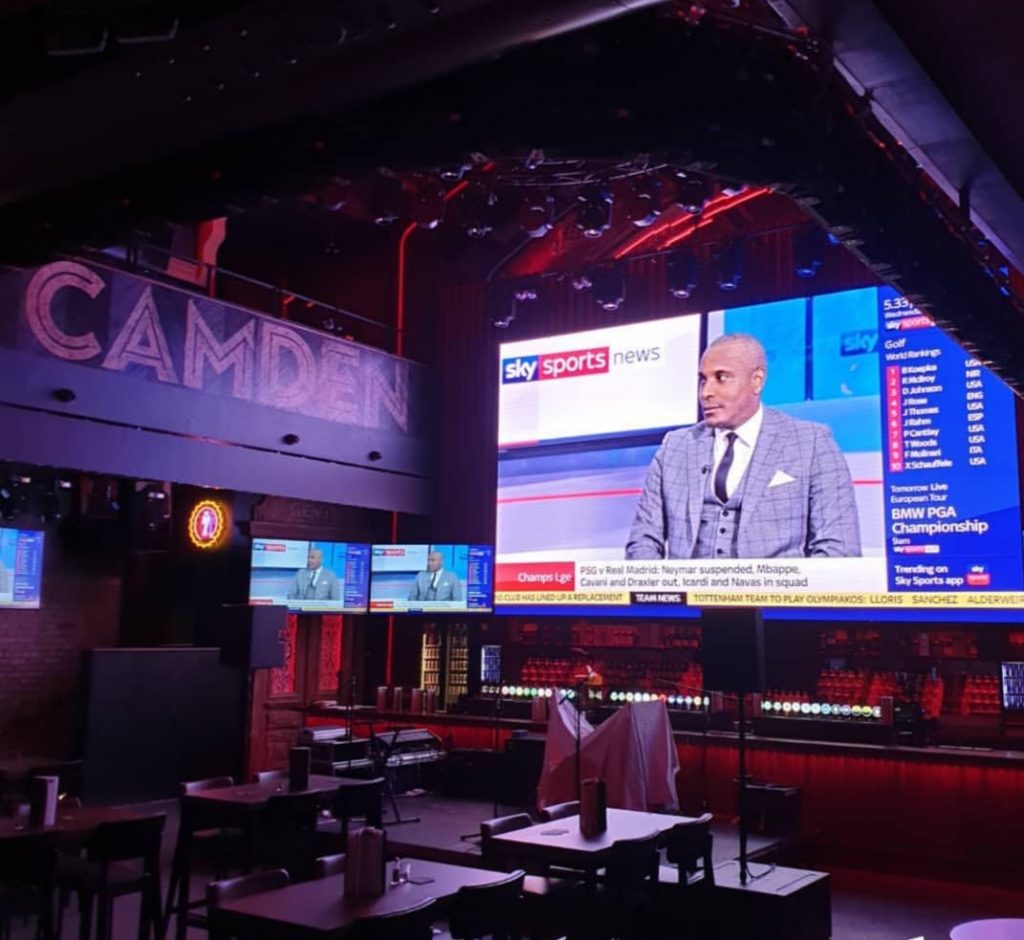