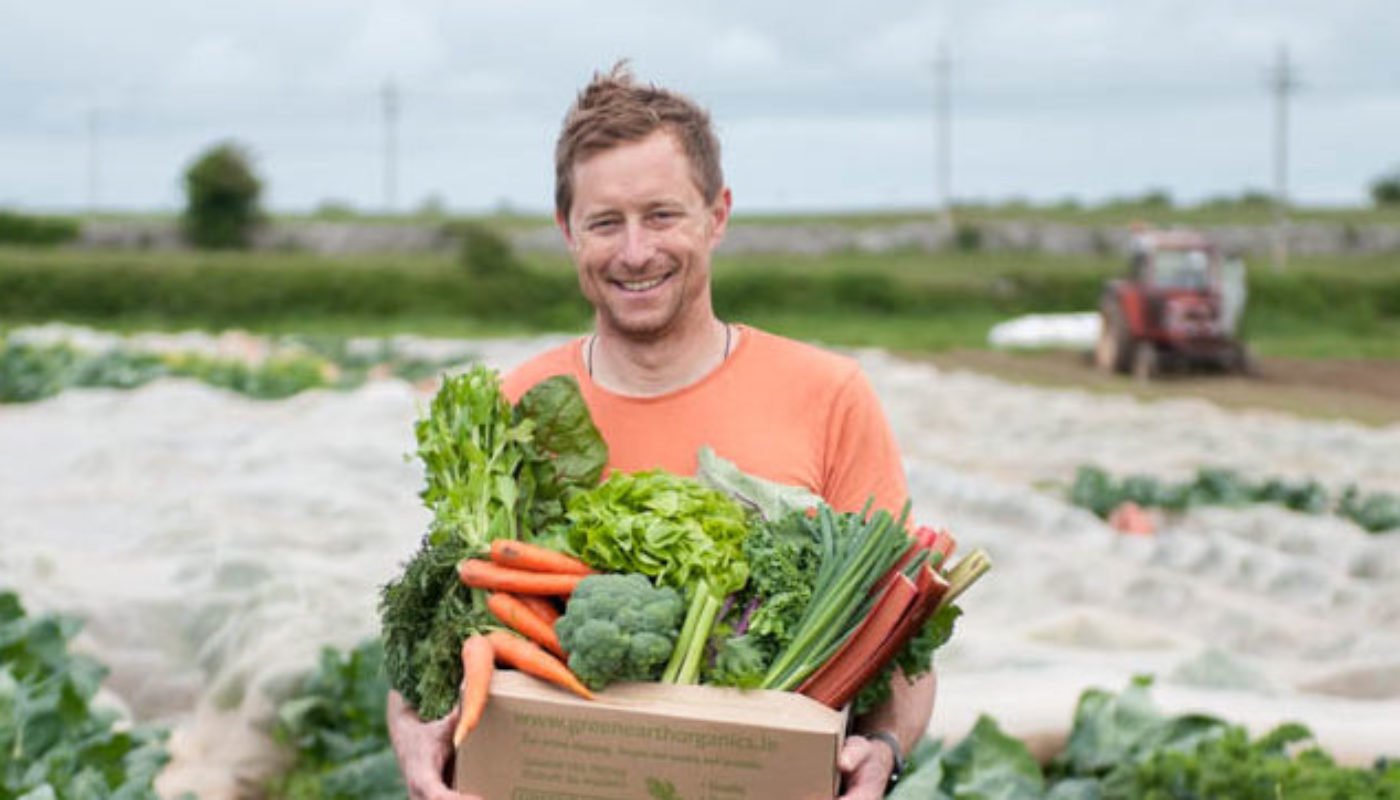 For Kenneth Keavey, dedication toward sustainability has always been there. The co-founder of Green Earth Organics, the fresh farm and vegetable box delivery business that he operates with his wife, Jenny, recalls trying to convince his parents to use Galway’s first bottle bank way, way back. “I joined Friends of the Earth and Green Peace when I was 12, so it was always there at the back of my head. I always felt we needed to do more to help Planet Earth. I always felt a little depressed by what I saw going on around me but I finally decided enough was enough and took the plunge to do something about it.”

Kenneth studied chemistry in Galway, then for a PhD in Cambridge, and began his career working in biotech. He moved back home in 2004, having spent over ten years in the UK. When he returned to Galway to work on his family’s land, the only place anyone could see and/or purchase organic vegetables was at Farmers’ Markets. Supermarkets, he says, may have stocked some produce, but “a home delivery service was unheard of. It was a constant effort to get the message across and try to convince people that this was a great thing to do for our planet, our land and our health.”

The early days were tough. Long days were the norm. Farm walks took place every year, and open days became a regular occurrence. “We became a national demo farm for organic horticulture for the Department of Agriculture and Teagasc. We had the Minister for Agriculture here, talking about it, and I was out at every show and event I could to get the word out. Slowly but surely, we got things going, and people became more and more interested.”

What is it like in recent times, I ask. Presumably, the public at large is much more aware of organic produce and how beneficial it is? Kenneth agrees that it’s a completely different scenario. “People are ultra-aware,” Kenneth confirms. “The main driver is local, fresh, taste, and organic features strongly, too. We hear a lot now about health, about chemicals and the damage they are doing, about the destruction of biodiversity and the decline in the bee population. People are right to be concerned about these things. Then, of course, there are the ubiquitous chemicals in our food. The only way to avoid them is by choosing organics. I spent my previous life working for big pharma and biotech companies. I worked and researched chemicals every day, and my thinking is they belong in a lab, not on our food.”

Over the past 15 or so years, Kenneth says that the development and subsequent growth of Green Earth Organics has been a tough if encouraging road to walk on. He says without the challenge, commitment and passion of all involved, the company might not have survived the journey. He has had plenty of support, he maintains, but it continues to be a tough task. “The days when you are feeling discouraged,” he enthuses, “are the days to go out onto the farm, feel the soil, see the bees, listen to the birds, harvest some carrots. Then it feels real. It grounds you again and again, and brings you back to the essence of why we do what we do.”

There are frustrations, of course. What is it like, for instance, striving to be as carbon neutral as possible yet seeing evidence of some people that, apparently, couldn’t be bothered? Kenneth says Green Earth Organics is in the middle of increasing their electricity solar range (“in 2018, we put up the maximum allowable amount of solar panels, and now we are covering our entire packing shed with panels”) and have the first electric van on the road delivering organic produce.

“Since the beginning, we have been planting trees on our farm,” he continues, “and now we have somewhere in the region of 6,000-7,000 trees. Tree planting is cheap and quick, so all farms in the country should be required to plant trees on their boundary walls or on all field margins. Imagine the difference that would make?” What  frustrates him the most, he adds, is what he terms ‘green washing’. The supermarkets are great at that, he says, “with things like plastics. It was big news for a while, they were all talk, but there was no action! So, yes, it frustrates me because ultimately it couldn’t be more important or more urgent. If climate breakdown roars, then we will all be in trouble.”

Of course, such conflict can be avoided, certifies Kenneth, providing we all repair our relationship with food. It boils down to one thing, he says: mindfulness. “Mindfulness of what we are putting into our bodies and the impact the production of that food has on the planet,” he acknowledges. “We are conditioned to not stop and think, but as we are all so busy, how can we? If for a moment, however, we stopped and considered, say, a pepper that is covered with chemicals and grown in the South of Spain. Quite likely, the harvesters were paid next to nothing and, possibly, not treated very well. If we knew that, would it change our choices? The opposite to this is local, fresh, seasonal food – we know where it comes from and how it was produced. Knowing what we are putting into our body is improving our resolve to not do the opposite. Truly appreciating the taste and the flavour and slowing down – for me, that is what is important.”

It begs two questions – how exactly did our relationship with food become so skewed and damaged, and what are the primary reasons for needing such repair? According to Kenneth, as consumers, we have become disconnected from our food, and we are removed from the places where it is grown and/or produced. In place of these, we are shown shiny supermarket aisles with nicely designed labels and glitzy plastic. We feel comforted that the people managing this are doing right by us, says Kenneth, but, unfortunately, this is simply not the case.

“When big retailers are fabricating farm names, saying foodstuff is Irish when it is not, or putting pictures of smiling farmers on walls whilst in the background the same farmers go out of business, they are not doing right by the consumer. The supermarkets have removed our power, they have come between us and the reality of food production. This in turn leads to corners being cut in production, biodiversity destruction, and chemicals on our land, our food and our water. The end result is food that is not healthy. Simply put, we need to reconnect.”

For 15% off your first delivery order placed with Green Earth Organics, enter ‘TASTY’ into the coupon section on their checkout page. Valid once per customer for 2022 only.