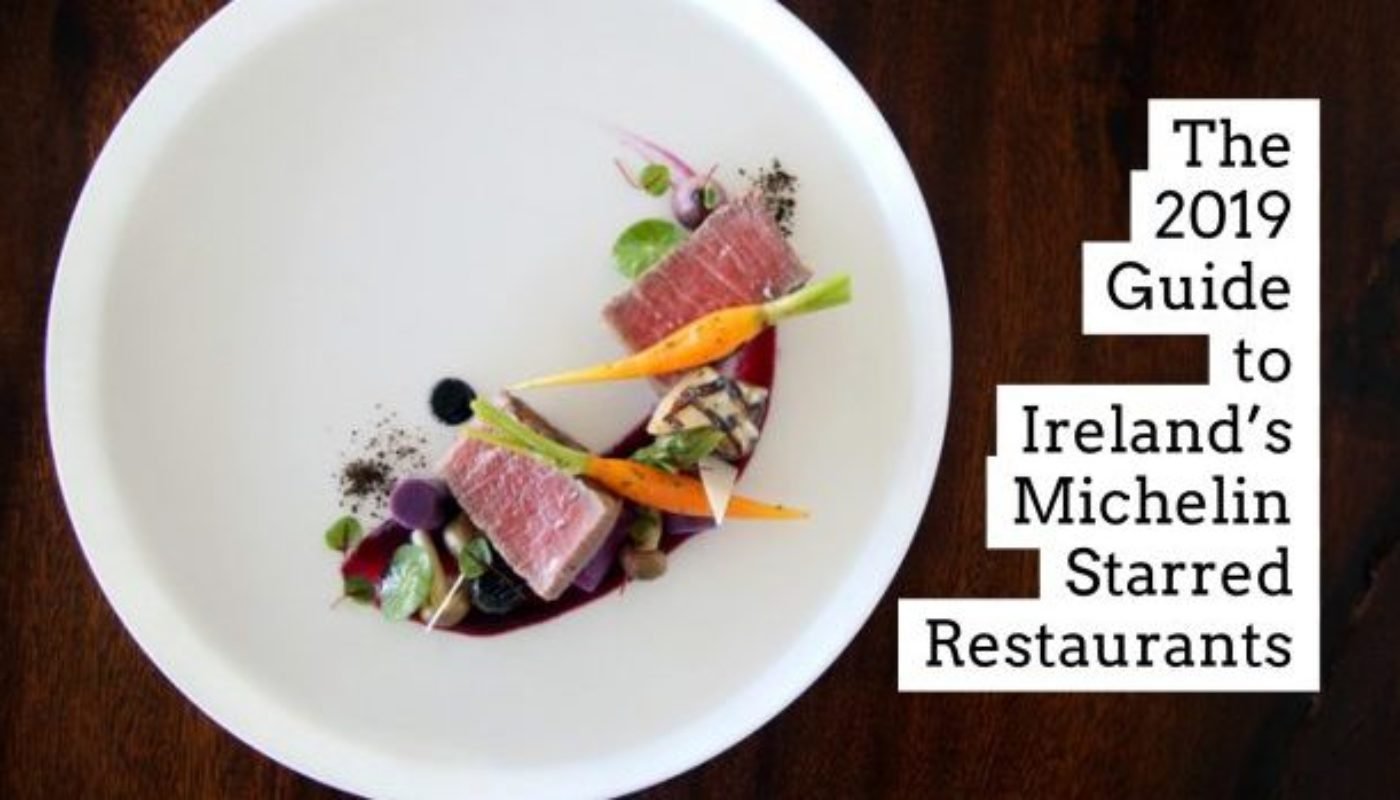 Home » The 2019 Guide to Michelin-Starred Restaurants in Ireland

The 2019 Guide to Michelin-Starred Restaurants in Ireland

With last year seeing the first ever pub in Ireland receiving the coveted award, the 2019 edition of the Michelin Guide Great Britain and Ireland has officially been unveiled.

With three new stars, all coming from Cork, the number of Michelin-starred restaurants in Ireland is now at 16. Restaurant Patrick Guilbaud in Dublin remains Ireland’s only 2-star restaurant. Upon announcing the award, The Michelin Guide said: “Chef Takashi Miyazaki dips into the traditions of Japanese cooking but adds his own interpretation.” One of the country’s most anticipated openings of recent years, you’ll find Rob Krawczyk’s Restaurant Chestnut tucked away in the beauty of West Cork. The award-winning chef was inspired to set up a restaurant in his home county thanks to his parents’ strong culinary heritage. The 18-seater restaurant is located in Ballydehob and the menu, which is inspired by nature, treats diners to innovative dinners such as mutton with smoked parsnip, eel with hamfat, asparagus and pennywort and hogget with yeast cauliflower and broccoli.

Upon announcing the award, The Michelin Guide said: “From neglected pub to delightful restaurant and now with a Michelin Star, Chef Rob Krawczyk has the confidence to know when to leave a dish alone.” Mews Restaurant was founded on the principle of exploring Irish cuisine through the extraordinary ingredients of West Cork. Supporting local producers, this destination restaurant takes its inspiration from the landscape and treats ingredients with the respect they deserve, “allowing their intrinsic natural flavour to take centre stage”.

Upon announcing the award, The Michelin Guide praised Mews “for the fine craftsmanship of chef Ahmet Dede at this seasonal coastal restaurant”. Restaurant Patrick Guilbaud still remains the only Irish restaurant to merit two star recognition. The restaurnt, which is located beside the 5-star Merrion Hotel, was awarded its first star in 1990 and received the second star in 1996. The team at  Restaurant Patrick Guilbaud cotinue to serve outstanding cuisine, matched by their excellent service and are experts in “the pursuit of excellence and delivering impeccable dining experiences”. After fifteen years in business, Ross Lewis’ Chapter One achieved the ultimate seal of international culinary approval in 2007 when they were awarded a Michelin star. With head chef Eric Matthews at the helm in the kitchen, Chapter One continues to grow and is definitely one of Dublin’s finest restaurants. Speaking to TheTaste last year, Ross stated that with his new team, Chapter One is currently in the midst of a new term, looking at “how we evolve the food, make it cleaner, more clever. There’s a new vision, a new thought process.” First awarded a Michelin star in 2003, l’Ecrivain has maintained an incredibly high standard since then, offering exceptional dining experiences to guests. Owned by Derry and Sallyanne Clarke since first opening in July 1989, the pair ensure that the team at l’Ecrivain are constantly innovating and creating a menu that will offer Michelin magic everytime. Head chef Sean Doyle is currently leading the talented kitchen team, ensuring that l’Ecrivain will be around for another 28 years. Restaurateur Eamonn O’Reilly, who also owns sister restaurant One Pico, opened The GreenHouse on Dawson Street in 2012, with head chef Mickael Viljanen’s creative flair catching the attention of Michelin, who awarded The GreenHouse with a star in 2015. While you can expect a predominantly French cooking style, the Finnish chef’s innovation means the menu is a constant treat for the senses. The GreenHouse also has a number of talented young chefs working there, including Mark Moriarty. This little gem, run by Andrew Heron and head chef Damien Grey, can only seat 60 people a week. Awarded their Michelin star in 2017, Heron & Grey offers a unique take on modern international cuisine, something which excites the palates of diners. Should you wish to make a reservation, be sure and have your dates in mind when the next list of available times are released on the first of the month. You can also add yourself to a cancellation list in case you get lucky. Utilising the very best that the west of Ireland has to offer, JP McMahon’s Aniar has had a Michelin star since 2013. With his constant innovation, a second star could definitely be on the horizon for the chef patron, who has made a number of changes to the restaurant to help ensure that coveted second star is on the cards. When speaking to TheTaste, he said: “I have been travelling around doing stages in various kitchens and looking to see how we can develop Aniar, and ultimately see how we can get a second star. That is the ultimate goal.” Just a year after achieving a star at Aniar as head chef, Enda McEvoy opened his own restaurant just off Eyre Square in the city, taking over a modern unit that was intended for retail use. His brave move paid off when Loam was awarded a Michelin star in 2016. McEvoy and his team continue to impress with their “modern ambitious cooking rooted in tradition”, warming the sparse, industrial feel of this large space with creative culinary ambition. Located within Mount Juliet’s splendid manor house, the Lady Helen Restaurant boasts panoramic views over the 1,500 acre estate and nearby River Nore. With Executive Chef Ken Harker at the helm in the kitchen, the restaurant has retained its Michelin star since first being awarded in 2014. The internationally-themed menu consists of local ingreditents, many of which have been gathered from the kitchen’s very own garden and farm. These ingredients are then artfully transformed into fantastic dishes to delight the senses. Kilkenny’s title as a culinary destination was bolstered considerably in 2014 when Michelin adorned the county with not one but two stars. While diverse in location, Lady Helen Restaurant being set on a lush countryside estate in Thomastown, while city centre restaurant Campagne is hidden underneath old railway arches on Gas House Lane, both have upheld their Michelin standard again this year. Offering seasonal, local produce with a French gastronomic twist, Campagne’s solid pairing of chef Garrett Byrne in the kitchen and Brid Hannon running front of house has ensured it has consistently delivered the dining experience that they first set out to bring in 2008. Chef Stevie Toman and restaurant manager and sommelier Alain Kerloc’h combined their fine dining pedigree when they opened OX in 2013. The pair had a strong vision for the restaurant from day one, which was to provide the same quality of food and attentive service as the restaurants of Paris, but in a more relaxed, simple environment. Stevie’s enlightened touch, transforming humble ingredients into something awe inspiring, ensured rave reviews were instantaneous, and after just two years, it was awarded a Michelin star. Speaking to TheTaste, Stevie said that achieving that stamp of approval was always a goal, but added that the informal atmosphere of OX is an example of how there is no set formula to achieving a Michelin star. Similarly to Kilkenny in 2013, 2016 was Belfast’s year, with two restaurants achieving a Michelin star, though in the case of Deanes EIPIC this technically wasn’t the first time. Proprietor chef Micheal Deane held a star for a record 14 years before a flood devastated his original restaurant in 2010. In 2015, he opened EIPIC and head hunted chef Danni Barry to bring a star back to the Deanes’ restaurant family, a task which she completed just 18 months after opening. Danni’s departure from EIPIC saw Chef Alex Greene take over her role as head chef. If the incredible views weren’t enough of a reason to visit this stunning hotel, then The House Restaurant will definitely attract your attention. The exquisite cuisine crafted by Dutch executive chef Martijn Kajuiter at The House Restaurant ensures that a fantastic standard is reached and surpassed. Unrelenting in his commitment to regional produce, Martijn’s passion and innovation has ensured the restaurant has retained the star it first earned in 2010. The restaurant also boasts a private dining room which features a fire and dramatic 20-foot long oak table. The first ever pub in Ireland to ever be awarded a Michelin star, The Wild Honey Inn‘s entry into the guide book caught many by surprise, but not those who have been tracking the progress of chef patron Aidan McGrath, who has run the establishment with his wife Kate, for the past nine years. His cooking style was praised by the Michelin judges as having a “a classical French base that delivers on flavour.” Securing a booking here was already a challenge but we expect now that a path will be beaten to the Burren as curious diners scramble to experience the character, warmth and impressive cooking for themselves – this isn’t your average country pub.