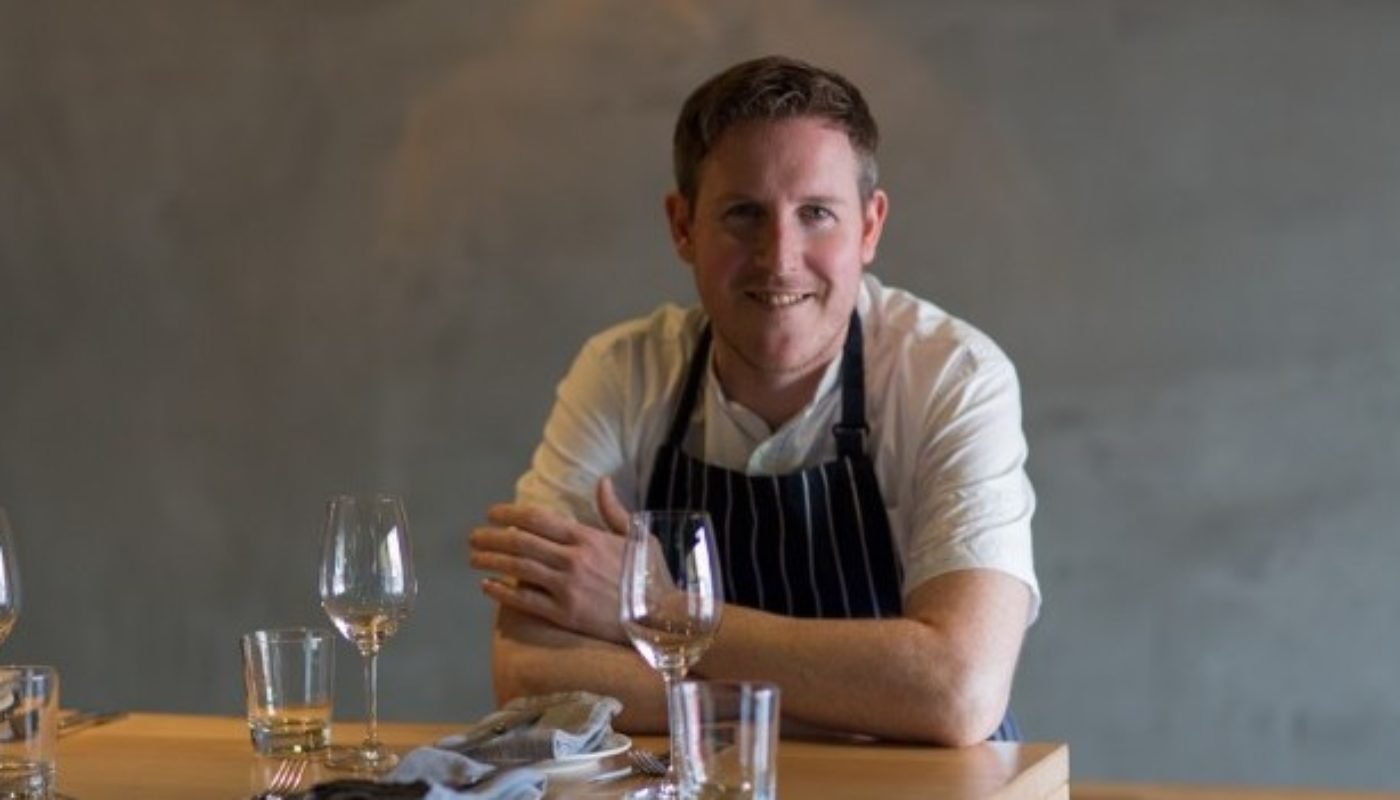 Closing Bastible’s blue door behind me, the phrase ‘work hard in silence, let success make the noise’ immediately sprung to mind. Having spent the morning chatting with Barry Fitzgerald over a flat white, I couldn’t help but feel like I had been given a rare glimpse into something rather special. Interviews, Barry tells me, are not really his thing. The buzz created by Bastible perhaps wasn’t Barry’s thing either, as on the mention of the word hype he is quick to play down what has been a phenomenally positive response to his restaurant’s opening just five months ago. Hype builds sky high expectations but it seems Bastible has risen to the challenge.

I would come to realise that this humble attitude is present throughout and defines not only Barry but Bastible itself. He is immediately likeable, unassuming and soft spoken. While hype is not Barry’s thing, it is clear that heading up his own haven in Bastible is very much his comfort zone as this calm reverberates throughout the restaurant, prep is underway, chilled out tunes are playing. It is little wonder the wide open plan space is like an opium den of delicious aromas, as Barry mentions a penchant for home-smoked elements, from bone marrow to ricotta and 48 hour fermented sourdough baked every morning in a cast iron bastible pot.

Sitting in his own restaurant, it has clearly all fallen into place for Barry. He tells me his parents often remind him of a family trip to Barcelona , where aged 12 he was mesmerised by the chefs working their magic in open kitchens, staring in, wanting to know more. On the topic of childhood cooking ambitions, he laughs as he playfully recalls how cooking with his mother, as one of four children, was motivated primarily by the desire to avoid washing up, but he felt drawn to the kitchen nonetheless. He notes however that coming from Ranelagh and attending a South Dublin school meant the chef profession seemed an unlikely career trajectory for him in his formative years. While a UCD Commerce degree beckoned first, the allure of the kitchen came to the fore during these years, with his head in cookbooks as well as textbooks, dreaming up dishes for family and friends.

A graduate at 23, his culinary career was ready to begin and with this in mind he turned up on the doorstep of L’Ecrivain, seeking direction. He was sent to Mint in Ranelagh, down the road from his family home, where he would meet his mentor ‘Ollie’ (Dunne of Bon Appetit) who he describes as ‘a really deadly, inspirational guy‘. But the road to Bastible was to be a scenic one, he laughs, “I honestly didn’t really start working properly until I was about 25!”. Satiating his wanderlust with detours to South America and Australia, he made the decision to set off on yet another adventure, to what would become his favourite food city.

“Looking at Ollie’s career I took a leaf out of his book and went to London as I thought it would be a better place to train, as I still had the desire to see the world and do different things, knowing I would be back in Dublin at some point.”

It was here he would have his first brush with the Michelin world, working his way up to head chef in Fulham’s one star Harwood Arms. Harwood Arms was an exceptional establishment in that it garnered a star for its gastro-pub style of food rather than the dainty haute cusine that springs to mind upon the mention of Michelin. This influenced Barry’s own style in no small way he says, in an almost hushed tone, that he was never a fan of ‘over-complicated food for the sake of it.’

“I did try as a young chef to work in 3 star but it wasn’t my cup of tea, I found what I like which is more like one star level or even more pared back, I really like that.”

On the topic of the Michelin universe, Barry recalls guarding a star in the Harwood Arms as being ‘stressful, but great for business if you can retain it’. Harwood Arms is no longer the talk of the town but the star keeps it busy he says. While he is adamant Michelin is not the be all and end all, he believes the guide has improved by broadening the spectrum of restaurants achieving stars.

“In Dublin the guide is a bit guilty of giving stars to ‘fancy’ restaurants but in London and further afield you get more Michelin stars for casual places.”

Modestly brushing off the prospect of earning a star himself, he thinks Bastible is not really operating at one-star level.

“If for some reason they thought we were and gave us a star it would be amazing and I’d be really proud but that’s not what we’re setting out to do at all, we just want a really good neighbourhood restaurant that offers great food at an affordable price.”

Upon his return to Dublin, as head chef in Merrion Row’s Etto, the restaurant earned a Michelin Bib Gourmand while still in the nascent stages of its operation and Barry thinks this is probably the category Bastible would aim for at the moment. Etto was a perfect fit for him at the time, worrying only about running a kitchen rather than a restaurant, as he and his partner ClareMarie Thomas had just welcomed their son. Inspired by the successful partnerships of Simon and Liz in Etto and John and Sandy Wyer in Forest Avenue, being his own boss with ClareMarie by his side was the ultimate goal.

It was always the plan when I came back to Dublin but I guess I just wasn’t quite ready when I had just moved back…having a kid was the craziest thing ever – it still is! Then I thought, if they can do it, why can’t we?

A research trip to the French capital cemented the concept for Bastible, with the 11th arrondissement a treasure trove of inspiration for Barry from Bones to Septime, small, personal, chef-run restaurants with resolute focus on quality food. The emergence of this neo-bistro concept has changed the face of the Parisien food scene and is slowly trickling to Dublin. Barry enthusiastically describes Les Deseurters – where a chef and sommelier up and left to establish a pared back space where the emphasis is on food above all else. In a way, Barry has pulled off a desertion of his own, leaving behind a starred-venue and the prospect of climbing the Michelin ranks to embrace the kind of cooking he is truly passionate about, ‘simple and well-executed.’

In an allusion to just how food-focused Bastible was in its conception, he recalls the hectic first few weeks after the glowing reviews had begun to roll in – “I’d be prepping with the chefs here and we’d just laugh because the phone was just going the entire time and we weren’t going to answer it because…thats not what chefs do!” This was the most prominent teething problem Barry could think of, as Bastible seemed to be a victim of its own success.

“Maybe we were a little bit naive thinking that there wouldn’t be much hype. It was originally supposed to be myself and one other chef, a couple of waiters and ClareMarie but it just kind of ballooned and we had to adjust quite quickly. We underestimated the man power and hours involved in running a restaurant, even a small restaurant.”

Despite these minor issues, he was confident that the food was on point from day one as he had taken young chef Paul Brogan on board from L’Ecrivain. Having previously worked together in Etto, the understanding of what Barry wanted from the food was there from the start. The team has since expanded, with the addition of two junior chefs, Barry O’Neill and Epi Rogan, who ‘just get things’ and more recently sous chef John White.

When asked if behind every great man is a greater woman Barry heartily concurs, garnering a laugh from ClareMarie. However, a more appropriate truism in this case would seem to be ‘there is no greater man than one who can acknowledge the woman standing next him’ as the synchronicity between them is obvious. She gets a raw deal, he confesses, as he gets all the praise while ClareMarie is just landed with all the emails and administrative toil. He can’t stress enough that a great deal of his success is down to this support, as ClareMarie’s graphic design background brings completely different skills to the table, and feels that working together works perfectly for them.

His consideration of vegetarian ClareMarie ensures that his focus on extracting the best flavour out of seasonal ingredients extends to his meat-free offerings, with a strict no risotto policy. Talking me through a recent Bastible vegetarian dish, salt-baked swede, egg yolk warmed in wild garlic butter and morels, his passion is such that I can almost taste it. His eyes light up as he describes the alchemy behind dishes like this, plucked from his brain and brought full circle from pondering to plate.

This is the ace in Barry’s deck and undoubtedly the reason he seems so laid back and un-phased by anything and everything that comes his way. His ability to match ingredients to unleash their potential is innate. Cultivated, of course, over the years, but inherent in him. Although he mentions wishing to ‘get his head out of the chopping board’, his natural habit is the kitchen and he appears to be thriving.

When the topic turns to location, Barry advises considering what Leonard’s Corner will look like in five years time, describing its eclectic population as a ‘hipster haven’ mixed with well off locals and students alike – an area which is more than up and coming. The culinary trail is undergoing urban sprawl and Dublin 8 is a prime example, as Barry lists neighbours Lock’s and more casual eateries like Bibi’s and the Fumbally as proof of this. Perhaps D8 will become Dublin’s answer to the 11th in Paris.

Eschewing the tablecloth and silver-service approach, the understated decor and informal feel of this new breed of restaurant in no way reflects the level of care that has gone into the dishes which will adorn the minimalist tabletops. As I rose from my seat, not unlike a wooden school chair, I realised many could sit and learn a lesson in restraint from Barry, who unburdened by ego can exercise the lightness of hand of a natural cook.

I leave thinking that there really is no smoke without fire. With Barry’s humble down-playing in mind, the plume emanating from this Leonard’s Corner gem is fitting – its namesake pot quietly works suspended over open flame just as Barry Fitzgerald’s Bastible is alight with the flames of possibility and promise. 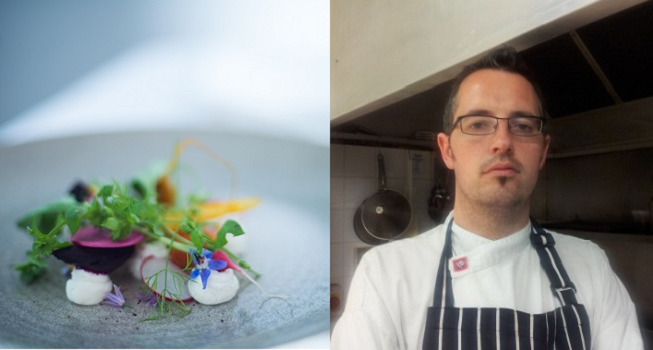 Moving with the Seasons – Chef N… 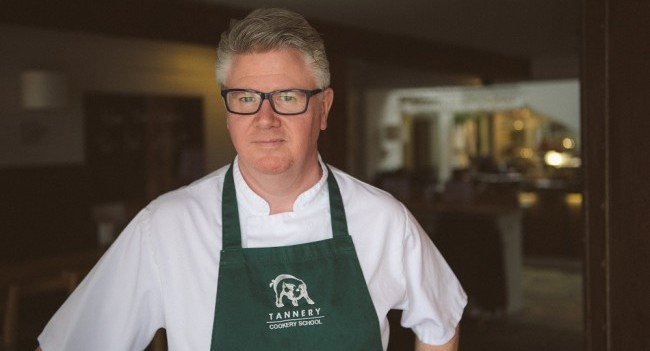 Table Talk with Paul Flynn from … 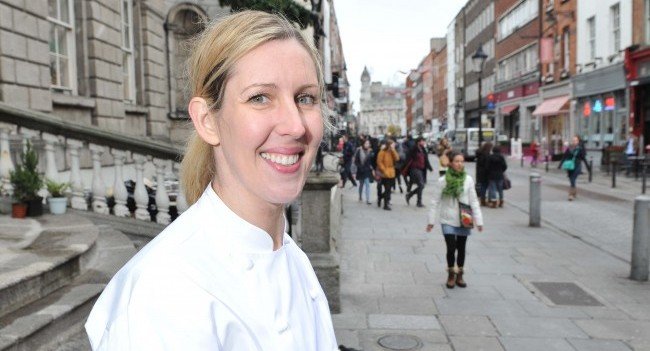 Burning Bias in the Kitchen – Tr… 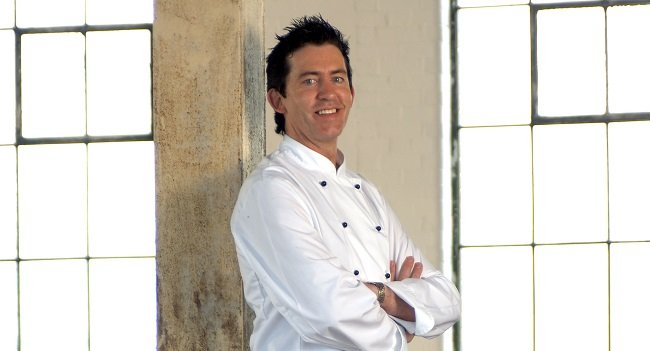