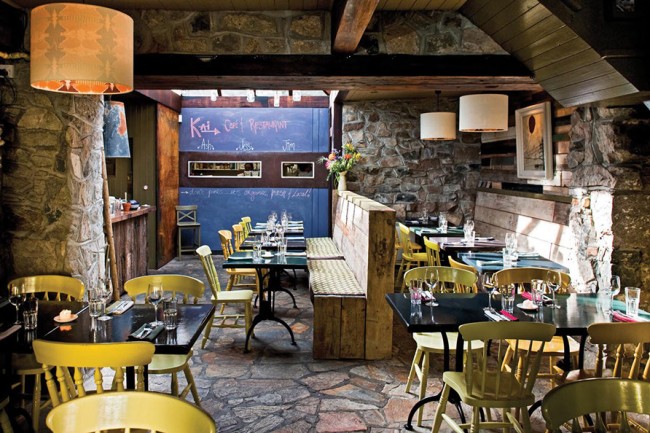 Having heard some great reports about the food on offer, Kai Cafe and Restaurant in Galway city has been on my ‘must-visit’ list for a while now so I was delighted to finally get the chance to dine there recently.

Approaching the restaurant, located on Sea Road in Galway, you are immediately struck by its charming frontage; a few tables and chairs placed outside suggesting the elusive possibility of dining outdoors should the Irish weather gods ever decide to look down favourably upon us. Unfortunately, it was decidedly chilly on the March evening we visited, so dining indoors was the only option open to my fellow diner, Eithne and to me.

Although compact, the restaurant is warm and inviting with an unaffected but nonetheless decidedly ‘hip’ vibe about it. The décor consists of bare stonework juxtaposed against walls of wooden cladding which appears to be made from salvaged scaffolding boards. These eclectic qualities follow through to the menu, which although brief, has quirky and often adventurous elements within each dish. This is food rooted in what’s available locally in the West of Ireland but also influenced by the background of Head Chef Jess Murphy who is originally from New Zealand.

Staff are friendly, speak enthusiastically about the food on offer and are delighted to answer any questions about the menu, all of which adds to the relaxed atmosphere in the restaurant.

There is an air of vitality about the food, yet it is not too virtuous leaving you with that feeling of slight disappointment which you get when you have eaten food that you know is good for you but lacks the self-indulgence factor.

The dinner menu on the night we visited was divided into four, offering a selection of pre-dinner drinks, starters, main courses and desserts. Given our cheery moods we decided to kick everything off with a Blood Orange Bellini. Invented by Giuseppe Cipriani who set up the renowned Harry’s Bar in Venice and named in honour of the 15th Century Venetian artist of the same name, the Bellini is a cocktail usually containing Prosecco and freshly puréed peaches. Here however, blood orange juice replaced the peach purée and was all the better for it, possessing a zingy freshness that was more seasonally appropriate and perfect as an aperitif. We sipped on the Bellinis and nibbled on a wonderful white sourdough and a robust but extremely tasty brown soda bread.

From a choice of five starters, we chose McGeough’s Air-Dried Ham and Sheep’s Cheese and John Dory Crudo, Gin and Avocado.

In many respects, both these dishes were assemblages of a selection of ingredients but where they really succeeded was in the quality of those ingredients and also the restraint that was shown in how they were treated and presented on the plate. This takes confidence and belief in what you are doing to achieve successfully and here it really worked. Tissue-like slices of air-dried ham in the style of an Italian Parma ham were served with equally paper-thin slices of pear and shavings of Knocklara sheep’s cheese. Everything was lightly drizzled with a barely sweet dressing which contrasted perfectly with the salty tang of the cheese and the underlying savoury tones of the ham. This was a simple dish but a real celebration of the excellent ingredients used.

The John Dory was treated in a similarly uncomplicated manner. Presented ceviche style; thin strips of the raw fish were lightly cured or ‘cooked’ in what, at first taste, appeared to be lemon juice but also had a sweetness which suggested the presence of lime juice. Also included in the curing solution was a well-judged amount of gin which leant the dish an almost palate cleansing effect without being dominating. Paired with avocado and thinly sliced apple, this was a beautifully balanced and thought-provoking dish which really showcased the sweetness and delicacy of the John Dory, a wonderful fish too rarely seen on restaurant menus. 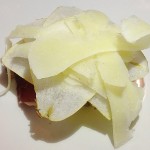 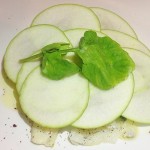 Although I was tempted to try the Roscommon Mutton Hot Pot with Green Sauce and Harissa as the mutton had been supplied by Castlemine Farm run by brothers Bernard and Derek Allen who are farm producers with their own butchers shop in my adopted home county of Roscommon I instead chose the hake dish as I was lured by the intriguing sounding almond aioli which it was served with. Two pieces of perfectly cooked hake were presented on a bed of flavoursome pearl barley along with slices of blood orange. Further flavour was introduced by the inclusion of chopped fresh dill and jewel-like pomegranate seeds which added little bursts of exotic floral fruitiness which married so well with everything else on the plate. The almond aioli was subtly flavoured with garlic which didn’t compete with the almond flavours that were also present. This was a clever dish and although it borrowed much of its character from the food of the Middle-East, it was still, somehow, very much a dish of Galway and the West of Ireland.

Steak was served perfectly seasoned, cooked medium-rare as was requested and accompanied by a wonderful garlic-flavoured butter and salad. Again, the quality of the ingredients used was very much on show and were allowed to speak for themselves without unnecessary additions.  Both mains were served with a sharing dish of moreish crushed potatoes, of which I am not normally a fan, but they were delicious being buttery and full of actual potato flavour! 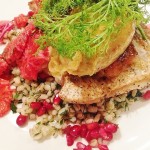 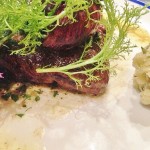 Given the generous main courses we had just eaten, we were fearful that we would not be able for dessert, but thankfully decided that we could be tempted. We settled on a 3FE Flat White with Hazel Biscotti and a Chocolate & Olive Oil Mousse with Toffee Popcorn

Coffee aficionados will be familiar with 3FE flat white coffee and here it formed the basis for a wonderful coffee ice-cream that was served with dark chocolate ‘bark’ and a hazelnut biscotti. This was a dessert, which despite its simplicity, did not disappoint. Chocolate and coffee is a classic flavour combination and here the contrast of textures between the cold velvety ice-cream, the chocolate and the crumbly biscuit worked wonderfully.

Ordering the chocolate mousse, I was concerned that I would be disappointed by its pairing with olive oil, but let me tell you, although the flavour of the olive oil was definitely present, it just worked; VERY successfully! This dessert was a revelation and the combination of the fruity olive oil was delicious with the slightly bitter dark chocolate that had been used to create the most velvety chocolate mousse I have ever eaten. The accompanying bag of toffee popcorn added a playful note to the end of a meal which had been thoroughly enjoyable. 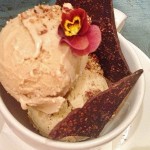 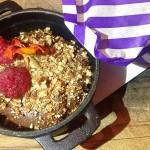 We washed everything down with a bottle of Domain de Lestang Bordeaux which we felt was reasonably priced at €28. Total cost for the meal, excluding the wine came to just under €110.

This was a memorable meal and restaurant worth visiting.