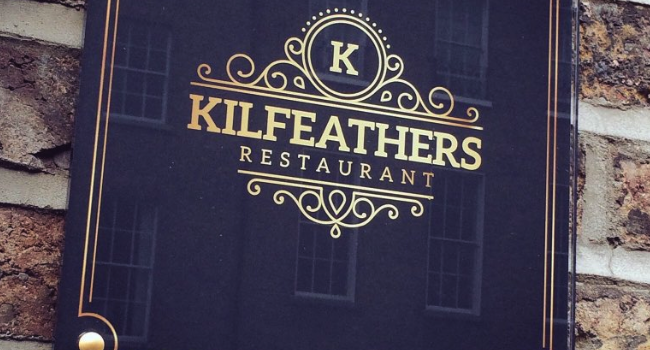 This weekend we broke a cardinal rule, we always try to steer clear of new venues in the opening couple of weeks but news that a new spot on Leeson Street had lured award winning chef Michael Hunter, formerly of L’Ecrivain, to head up its new fine dining inspired restaurant proved too hard to resist and as we were celebrating a birthday we thought why not.

Housed in a beautifully restored Georgian building, which was once home to Buck’s Townhouse you, a favourite celeb, haunt you will now find three venues in one, The StoneLeaf Cafe and specialist tea room, a late night gastro bar and as of last Saturday a fine dining restaurant on the upper level. At a time when many venues are steering away from this trend, Kilfeathers Restaurant will be swimming against the tide. Unlike the traditional fine dining spots they are no starched tablecloths, instead you will find warm and inviting dining space with a relaxed feel.

We arrived at 8pm on their opening night last Saturday to a fairly quiet dining room, with live entertainment gently playing some smooth jazz in the background on their baby grand piano. The space itself is finished to a high standard with plenty of filament bulbs dotted throughout, exposed brickwork and ridiculously comfortable, studded, black leather seating which all feels quite seductive. We were seated next to their sash windows overlooking Lesson St. and read though the dinner menu with an excited anticipation, not only due to the fact there were some interesting dishes listed but also because of the value on offer. Even without the option of an early bird menu (which we are sure will be added in due course) we were pleasantly surprised to see sensibly priced dishes. 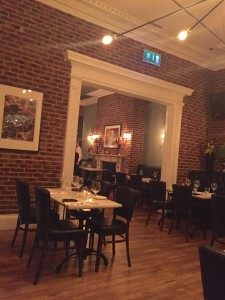 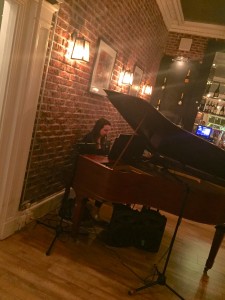 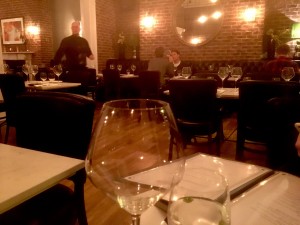 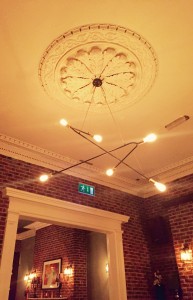 Opening nights mean opening jitters, and our waiter on the night was certainly feeling the first night nerves but this is nothing that some time to bed in can’t solve. Hunter’s most recent position as Head Chef in Scholars Townhouse, one of Co Louth’s finest, has clearly influenced some of the menu, with several Boyne Valley ingredients making an appearance, most notably Ballymakenny Farm Heritage Potatoes who Hunter has been a fan of for some time. The menu reads like and ABC of deliciousness, with a choice of five starters and six mains, there is lots of scope for all taste buds. We were immediately drawn to the more pricey starter of Air Dried Duck (€11). Not only was it elegantly presented, it was almost like a little bit of theatre on the plate, each intricate element blending beautifully into the next. Greenville farm blackberries provided a pleasant contrast against the almost mousse like duck liver parfait, an excellent beginning to any meal. Across the table a Rolled Breast of Kilkenny Rosé Veal(€10) arrived, slightly over done for our liking but full of flavour none the less. If there is one thing Hunter does well it is understated flavours and his horseradish mousseline was velvety smooth, droplets of watercress puree and a simple shaving of aged parmesan all combined for another successful dish. Mains unfortunately are where the first night jitters crept in, with a mix up on one of the main courses we ended up with a superb Pork Belly(€24) dish instead of the preferred rabbit. Hunter’s secret ingredient of turf smoked bacon jam worked a dream with the crispy pigs ear and crunchy runner beans, “every cloud” as they say. Our other main was spot on, although we were torn between the Kerry Lamb and steamed mussels, in the end we decided on a generous, fleshy Fillet of Halibut (€29), cooked sous vide (slowly cooked in a water bath to you and me), the idea being you get retain all the flavour and moisture with a stunningly even finish. Hunter had paired this with avocado, cured egg yolk, a smokey charred lettuce and slightly sour yuzu beurre blanc. Yet again the subtleness of the combination proved to be a real winner.

The wine list could certainly do with a greater offering by the glass and we would love to see some more New Worlds added but there is no doubt it is a well priced offering with bottles starting from €24 and at least 10 choices under €35. We paired the halibut with a toasty bottle of Les Chaniots Montagny 1er Cru (€50) which worked a dream with the elegant flavours in the dish. Birthdays only come once a year after all so pushed the boat out a bit. We settled on sharing a dessert and refrained from the lure of the cheeseboard, instead turning to an interesting take on an Apple sponge(€7), all is never as it seems with Hunter designing a menu and it is clear to see his 19 years as a pastry chef have paid off. Out arrived a deconstructed dish of feather like, aerated apple flavoured sponge, macerated blackberries, tiny spheres of apple from another Louth producer – Stragrennan Farm and an indulgent quenelle of mascarpone, a perfect note to end the evening on.

Kilfeathers Restaurant is a breath of fresh air to the Dublin dining scene, Hunter’s imagination and execution of every dish has to be applauded. Once they smooth out the service issues, this end of Leeson St. finally has something to be excited about. You heard it here first.