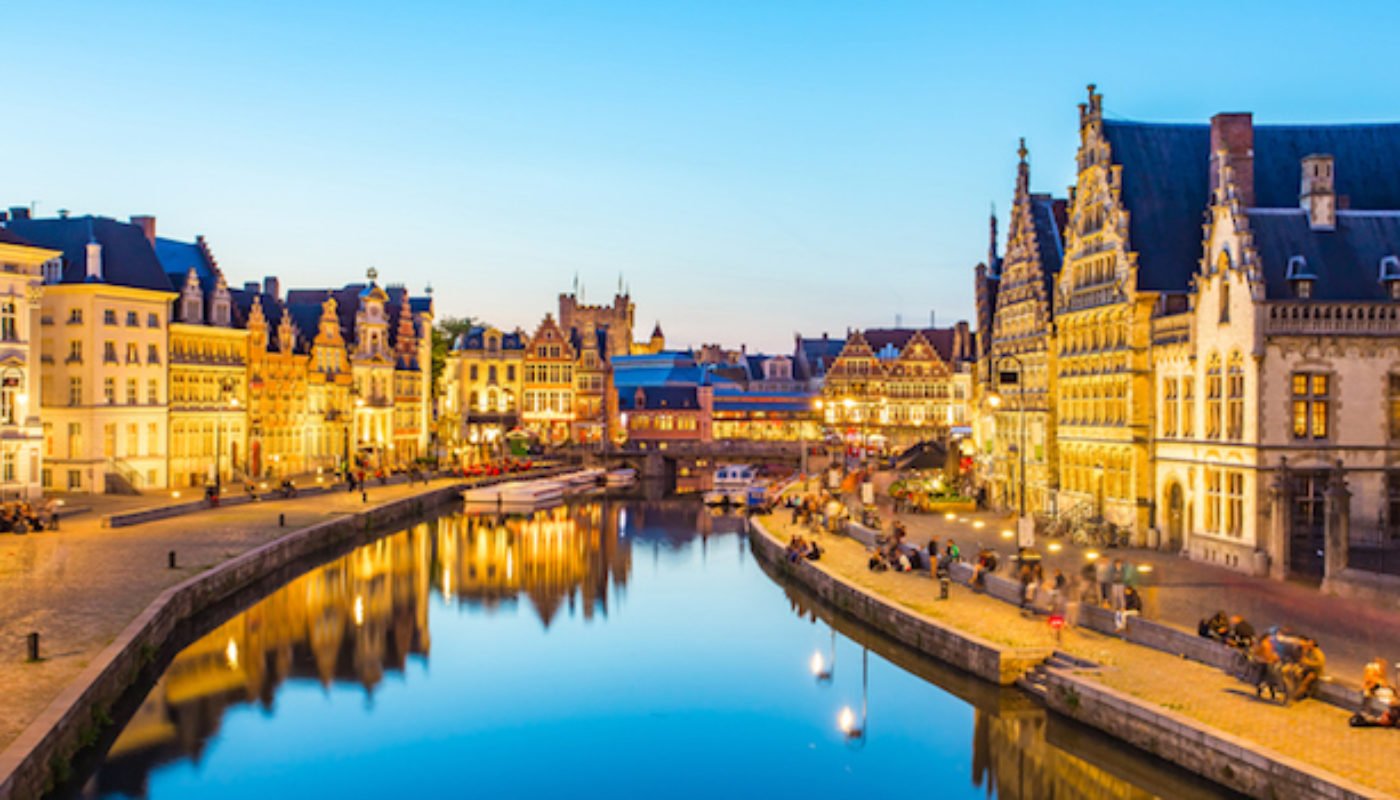 You would definitely know that Ghent was once one of the most important, wealthiest cities in Europe – it still retains the impressive architecture and the houses of rich traders, with a (vehicle-free) city centre that remains so historically atmospheric that you can almost see the ghosts. With the city merely 30 minutes by train from Brussels, Ghent is perfect for a day trip but we’d recommend you spend more than half a day here. Why? Ghent is something of an under-the-radar gem: history blends with contemporary yet chilled urban life in a swirl of culture and many terrific restaurants. Ghent is a port city, and has been since the 11th century, so there are bridges, waterways, and quays aplenty. Hundreds of years ago, of course, there was industry around these areas, but times change and now tourism is the money-spinner. Not that most people think of that when they’re on a weekend (or longer) break. Around by the river, you’ll see Grasbrug, a tiny bridge that is viewed as a treasure by the locals. On each side of the Graslei and Korenlei you will see heritage structures now used contemporaneously – in the Middle Ages, the Cooremetershuys was in the thick of the city’s corn trade, but it is now an accessory shop. Take a gander at the beautifully restored frontage of the Guild House of the Free Sailors, and then take a seat at any one of a number of cafés, restaurants, food stalls, and bars by the quayside.

If you fancy blending history with sightseeing, then a visit to the Castle of the Counts is required. Imbued with the looks of a fairy-tale and the background to a turbulent history lesson, the fortress is the sole remaining example in Flanders of a mediaeval castle with a mostly intact defence system and a moat. As well as outlining the social and political history of Ghent, the castle also displays a collection of torture equipment (on show, we are informed, “in a suggestive executioner’s cabinet”). Despite the inferred suffering, it details the Castle of the Counts as a former symbol of power and tyranny in centuries gone by. Its restoration, however, has ensured that it stands as the city’s most significant tourist sight.

Come nightfall, you might wish to remove yourself from thoughts of torture, so walk around the city’s streets, structures and squares. Unusually for such a compact city, the lighting design is both sustainable and magical. Now over 20 years into its city Light Plan (which was inaugurated in 1998, and which has won many international prizes), it is a joy to be surrounded by such an innovative localised scheme. In Ghent, streets, public spaces, monuments and architecture alike are dressed up for (you could say literally) a night on the town. Over the past five years, Ghent has become quite the magnet for gastro talent from award-winning chefs. Their innovation and confrontation of the norms have set a really high standard for other European cities to match. Restaurants, meanwhile, come in all styles and designs, from centuries-old buildings to hip young joints that are anything but traditional, and run the gamut from Michelin-starred gourmet dining to everything in-between.

The former has been one of the city’s finest restaurants for over 30 years – Jan Van den Bon (Koning Leopold II janvandenbon.be/en). Way ahead of the curve, the restaurant specialises in several areas that ensure a return visit. From the off, there’s the service, which is amiable and relaxed; secondly, there are the French-Belgian food choices, which comprise local vegetables (some of which are relatively unknown to all but the connoisseur!) and a particular emphasis on constantly searching for the correct mix of flavour, texture, scent, and colour.

For something slightly trendier you have to visit Taxi’s (Zuidstationstraat 35; taxisrestaurant.be/en), a restaurant/bar in the Het Zuid area of the city. Once an industrial space, Het Zuid is a major mecca for eateries. As can be gleaned by its name, Taxi is on the site of a former taxi garage, but that’s as grimy as it gets. Overseen by Executive chef Gilles Bogaert, who values organic agronomy and constituents, this is a seafood restaurant that puts its food through sharp twists and turns.

Another doozie of a restaurant is Karel de Stoute (Vrouwebroersstraat 2; restkareldestoute.be), which features fine fare created by chef Thomas De Muynck, and suave front-of-house service by his wife, Lien Van de Velde. Having learned multifarious tricks and treats of his trade at Bruges-based Spermalie catering school, De Muynck honed his craft at various quality establishments abroad as well as at home before setting up his restaurant in the historic area of Patershol. His motto? “Always affordable, never under the bar, always heavenly tasty.” I’ll drink to that, for sure. Like all accommodation in any city you can think you pay your money and you make your choice. Ghent is no different, but you’ll be pleased to know, perhaps, that even four-star head-rests are reasonable enough.

One of our favourites for both ease of access to the city centre and its overall design aesthetic is Harmony (Kraanlei 37; hotel-harmony.be), which is family-owned, and situated in the acclaimed culinary district of Patershol. With a heated outdoor swimming pool, this restored 19th-century townhouse offers views of the heritage-laden city centre. During the summer months, breakfast is served in the elegant courtyard.

Any hotel hinting at comfort in its name is fine by us, which is why the recently refurbished Pillows Grand Hotel Reylof (Hoogstraat 36; pilowshotel.com/ghent) is mentioned here. This is, quite likely, the pick of the bunch – a deluxe four-star in the heart of the city in what was once the 18th-century residence of Baron Olivier de Reylof. With a leafy courtyard situated between the building and its original coach house, three dining options (LOF Café, Living Bistro, and LOF Restaurant, which cooks and presents exceptional culinary fare inspired by the gastro-bar philosophies of Dutch chef Ron Blaauw), and a seductive, neo-classical blend of marble and wood, this is the one if you want to push the boat out.

If you’d rather rein in the oars, of course, there are many other choices. Consider, for example, the distinctive 1898 The Post (Graslei 16; zannierhotels.com/1898thepost), a charming boutique hotel housed in the city’s former Post Office building, and located between the serene Graslei quay and Korenmarkt (the justifiably celebrated city square). With less than 40 rooms (with such appropriate names like The Postcard, The Envelope, The Stamp, The Letter, and so on), 1898 The Post opened two years ago, and has quickly established itself as a designer hotel must-see: the late-19th-century architecture might be in stark contrast to the room décor of vintage furniture, dark-grass walls, and elevated ceilings, but the pairing is beautiful. Factor in the hotel’s gorgeously period cocktail bar – The Cobbler – and you have a one-stop-shop for old-timey sophistication.