Paul Rankin is a source of great pride for Northern Ireland, winning NI’s first Michelin Star in 1991 for his then restaurant, Roscoff. But meeting him backstage at the BBC Good Food Show, it’s first time in Northern Ireland in Belfast’s Waterfront, I can’t shake the mental label of TV stalwart from my childhood.

I think Paul Rankin and I hear the giddy music of Ready Steady Cook kick in, followed by Ainsley Harriet’s hyper-active intro and then Paul’s charismatic Northern drawl. I am disappointed that I forgot to bring along a mystery bag of ingredients for him to magically transform into a 3 course meal but excited to chat to one of my TV favourites.

It really feels like a proper BBC Good Food Show, Paul notes proudly having finished his third day of cooking up a storm of delicious food and laughs for an adoring audience in the Super Theatre, bringing back to life his endearingly excitable TV persona. When asked if TV Paul is just a character,, he confirms that “I’m really just the same all the time, the whole telly thing for me still seems a bit unreal to me.” As for buying into the “star chef” persona, while Paul is happy to be recognised as “the Irish TV Chef” being a celebrity isn’t something Paul places too much weight on.

I wouldn’t give it a lot of gravitas, its not real. Celebrity is a funny thing, it is a phoney kind of a thing…I don’t trust it and I’m not particularly bothered by it one way or the other. 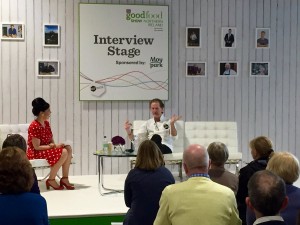 That said, few have the same level of insight into the workings of TV cooking as Paul, an old hand at captivating audiences young and old over the years. Noting that “TV has been an adventure, some TV is more fun and has more depth than other TV programmes,” we get to talking about the broad spectrum of shows he has found himself on.

Outside of the TV kitchen set, Paul fondly recalls taking to the X Factor Battle of the Stars many moons ago forming a boy band with fellow chefs Jean Christophe Novelli, Aldo Zilli and the late Ross Burden. Serenading Simon Cowell with Livin La Vida Loca, Paul remembers X Factor as his most fun TV memory, “like being trapped in someone else’s life for two weeks” with full vocal and dance training provided.

They did try to make sure we didn’t make complete fools of ourselves…but we did – we were absolutely awful!

More in his comfort zone, TV cooking show junkies like myself will remember the early days of Saturday Kitchen, which featured Paul regularly. As well as earning the title of Michelin starred chef in his restaurant Roscoff, Paul held the esteemed accolade of sitting atop the Saturday Kitchen Omelette Challenge Board for quite some time, having defeated Gennaro Contaldo in the first ever contest. “I was head of the Omelette Board for about 5 years. It gives you a lot of street cred with the young chefs…. They’re like you’re the king of the omelettes dude!” he laughs, clearly not one to take himself too seriously. 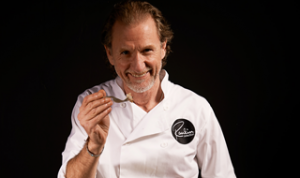 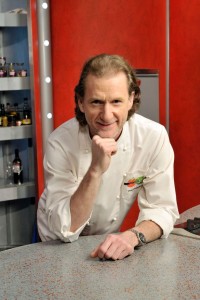 With Saturday Kitchen being a weekend ritual for food lovers for so many years, Paul felt he was a spark for former host James Martin to “deliver a different type of banter”.

I’ve known James for 20 years, people would say to me that some of the best Saturday Kitchens they have seen have been when I’m on with James and that is partly because James and I are pretty good mates. I can say things to James that most people can’t say but then that gave him ammo for a lively show.

As James had appeared alongside Paul at the BBC Good Food Show, as did Bake Off favourite Paul Hollywood, he laughs recalling the chef antics backstage, “we’re like blokes in a pub, we throw insults at eachother all the time!” Having had friendly sparring matches with Hollywood he did jokingly advise that “you need to be careful with James, he can get upset if he’s not in the right mood!” Appearing on Saturday Kitchen was always a highlight for Paul, even if he does concede that it was “hard to get to bed in London before 4 o’clock in the morning on a Friday night when you’ve got so many cheffy mates there!” 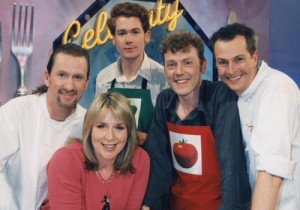 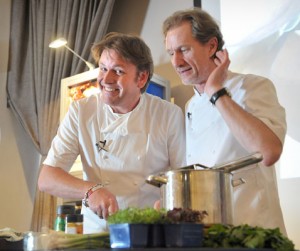 On the future of the show, Paul, like many of us, feels James is greatly missed. While he recognises that our own Irish Donal Skehan did a stellar job filling in for James, he feels that the show needs a restaurant heavyweight to maintain its ability to attract top international chefs. His top pick for the permanent slot? “Glynn Purnell – he has the gravitas, he is great craic and he has the respect of the restaurant industry behind him, I’d love to see him take over,” he says of the yummy Brummie.

It is easy to forget just how accomplished a chef Paul is while we laugh at his more light-hearted TV appearances, but being chosen to take part in the highly respected Great British Menu, where chefs compete to cook at prestigious banquets serves as a reminder that Paul is a heavy-hitter in the kitchen. Returning to friendly TV chef rivalries Paul recalls losing the chance to cook the Queen’s birthday meal to fellow Irishman Richard Corrigan. Laughing, he notes that “it’s telly, it doesn’t matter, but it still gets me – I still maintain that my menu was better and more appropriate for a lunch for an 80 year old lady in June!” He jokes that Corrigan is a rogue, for whom he has the greatest respect, insisting there are no hard feelings…”I’m very fond of Richard…very fond…the big bastard!” he grins. 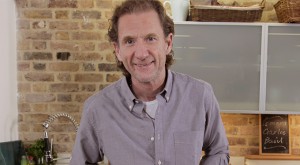 Taking screen time out of the equation, as a name that automatically springs to mind when discussing the Northern Irish food scene, Paul is keen to highlight just how exciting a place to eat NI is at the moment. “Ten to fifteen years ago in NI we were a bit behind, in the Republic you had a raft of great artisan, small producers that we didn’t have” Paul laments, but quickly notes that the tide is turning for the North – “in the last 5-7 years we’ve been on a catch up and that is accelerating, it seems like every month there is a fabulous new, inspired food producer and it’s about time and it is so encouraging that it is here.” Struggling to narrow it down, Paul points to Young Buck, NI’s first raw milk cheese, Abernathy Butter and Hannan’s Himalayan salt aged beef as his picks of the Northern litter.

As a seasoned restaurateur who has moved in and out of the industry in which he once owned 13 eateries, Paul is encouraged by Belfast’s aquisition of two new Michelin stars last year – Ox and EIPIC. At the same time he is quick to point out that “Belfast has always been a great restaurant town since the mid 90’s – for the size of it we really have punched well above our weight and we still are.” 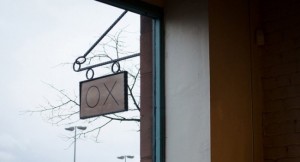 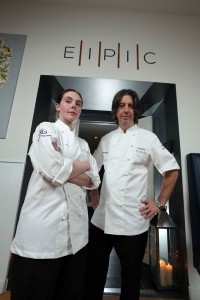 Paul feels that after enduring the difficulties of the crash, Belfast is regaining momentum – Belfast is on a roll, growing steadily – its has really been rocketing up again with a lot of adventurous new generation chefs.” Paul notes that these chefs are almost second generation protegés for the likes of himself and Michael Deane, with those they had mentored training up the new wave of celebrated chefs, which “is lovely to see”, he says.

Speaking on his own experience of the Michelin universe with former Belfast heavyweight Roscoff, he says “we never coveted a star, it was just something that came along there. If I’m honest with myself, I prefer something a little more relaxed with spanking great cooking and produce.” That said, there is a fine balance to be achieved in creating a fantastic restaurant, he says. “Sometimes people go too brasserie – too slap dash and relaxed” he believes, noting that there is no one formula for restaurant perfection.

For Paul, cooking seems to be a pursuit to be entered into with abandon, or not at all.  He believes that the best chefs “don’t follow the trends…they cook from inside their heart, their mind and soul. When you cook from there you get something very individual and special…And I miss that a little bit,” he confesses. 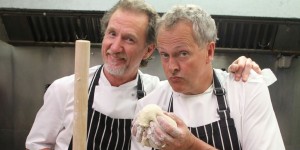 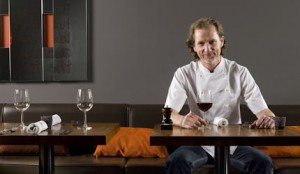 On the topic of restaurants and the professional kitchen Paul’s longing to be back in the thick of it is palpable, leading me to what feels like a tough question – what is really next for Chef Paul Rankin? Somewhat stumped but determined to be honest he admits he isn’t entirely sure what the next five years hold.

I’m really at a crossroads because I still have restaurant dreams pretty much every night. Not being in the restaurant business has left a huge hole in my life.

His heart, it would seem, is in the kitchen but he is realistic with himself, noting that he can easily get excited about a prospective new project but “I think about how much time, energy and life force it takes and how sometimes it’s not very healthy and remember it is so hard to find the balance when you work in restaurants.”At 56, he realises he couldn’t throw himself into life on the pass every night, but is confident that the restaurant dream could again become a reality.

Full of energy and showing no signs of slowing down, Season five of his show Paul and Nick’s Big Food Trip, will air next year, chronicling his Canadian eating escapades with his fellow chef and buddy Nick Nairn. Paul knows how to be a TV success, but the longing to return to the kitchen may yet take over, as he confirms he loves a challenge as much as he loves an adventure. Throwing out the possibility that he may yet “open a restaurant in Ibiza” or even become a wine maker, we definitely haven’t heard the last of Paul Rankin,whatever his next chapter may hold.

Growing up with the name Darina, I was constantly asked if I could cook like my namesake. With that in mind, I realised baked goods make excellent bribes and an obsession was born! With bachelor’s and master’s degrees in law I undertook a PhD, but a preference for cookbooks to textbooks persisted. As a (self-confessed!) demon in the kitchen, I am the only person to have contested both Masterchef and the Great Irish Bake off, fuelling my desire to focus on food in a serious way. Working with TheTaste allows me to satisfy this craving.