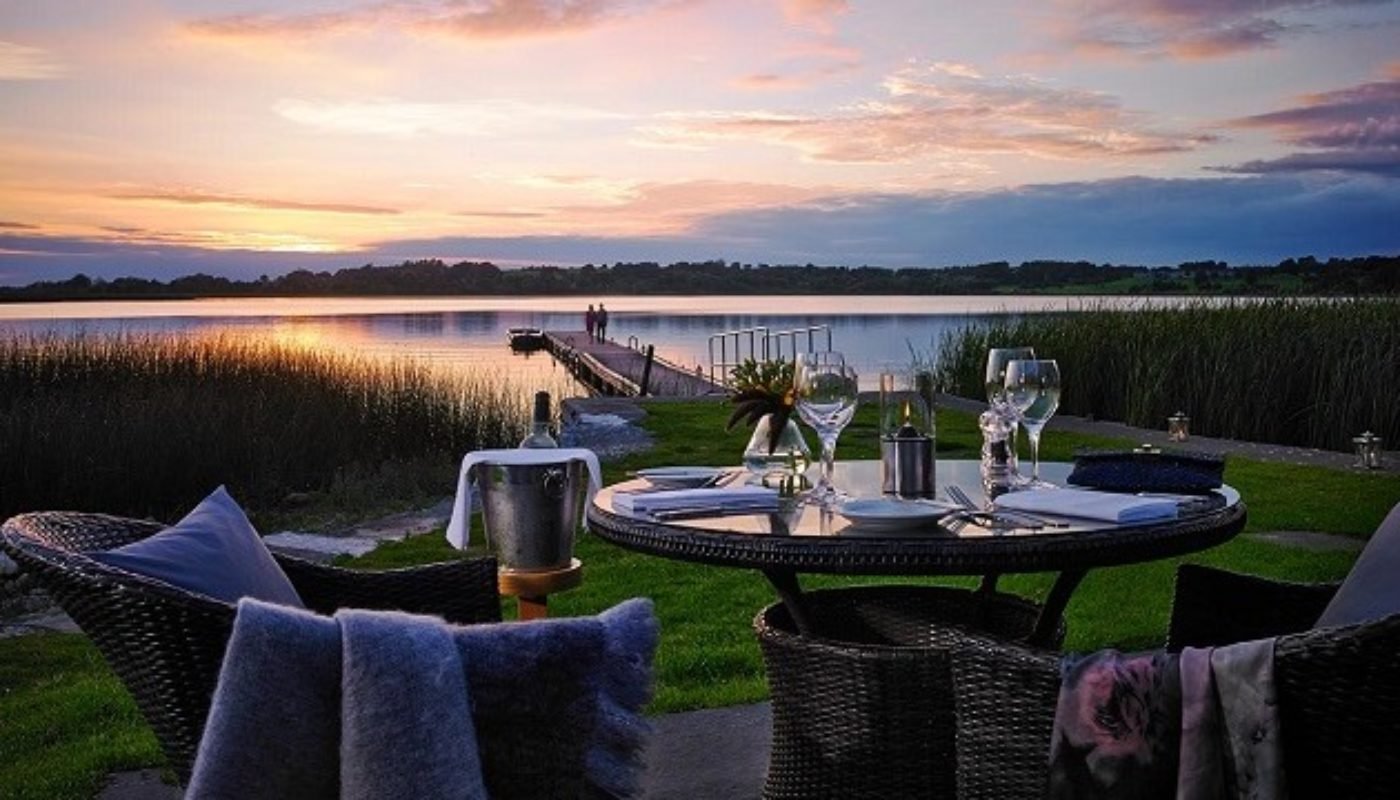 Even those who haven’t travelled to the heart of the Midlands might be familiar with the idyllic setting of Wineport Lodge. Nestled on the banks of Lough Ree, and surrounded by native woodland, the picturesque backdrop to the luxury Lodge played on our screens on several series of the popular TV series The Restaurant, both on RTE and TV3.

But of course, as the title of show suggests, it was Wineport Lodge’s restaurant that was the star of the show. While resident food critics Tom Doorley and the late Paolo Tullio made themselves at home in the rustic dining room, and in its kitchen well-known faces like the late Tony Fenton, State Pathologist Marie Cassidy, and Irish rugby player Andrew Trimble donned their aprons.

A more permanent fixture behind the pass at the Wineport Lodge restaurant is head chef Shane Ennis, who stayed out of the spotlight during filming, but through his cooking continually shines a light on fantastic local producers and attracts foodies from all over Ireland to the southern shores of Lough Ree.

Growing up in Kildare, and later Dublin county, Shane credits another Irish chef for giving him a head start in the world of cooking, putting him on the path to being the top quality chef he is today. After studying in culinary arts in DIT Cathal Brugha street, Shane’s dad spotted an article in the paper about a then up and coming chef, Neven Maguire. Driving Shane to Blacklion, County Cavan, his gut feeling that Neven would see something in Shane was proved right, and it was through Neven’s contacts that the young chef secured himself an elusive stage in a 2 st Léa Linster, a 2 star Michelin restaurant in Luxembourg. “That started me on the route to where I went next,” says Shane, who following the stage landed himself a job in Restaurant Patrick Guilbaud, which to this day is only the restaurant in Ireland to achieve the those elusive 2 stars. He gained further experience in the 5 star Drumoland Castle, and during a gap year in Australia, which Shane says was “very different to Ireland at the time, lots of fusion and a big Asian influence.”

By the time he returned from his travels, his parents had upped sticks and moved to Athlone, where they had a boat moored on the Shannon. It was those family ties that pulled Shane to the Midlands, and he himself has been docked at Wineport Lodge ever since.

Shane says he had experience hotel kitchens prior to Wineport, working in The Central Hotel on Exchequer Street as well as at Drumoland Castle, but that the approach they take to dining at Wineport Lodge is unlike at his previous posts. “Drumoland was more banquet style cooking. Wineport is a bit different. Unlike a normal hotel, Wineport is all about the restaurant. I prefer that more hands on approach rather than functions and that.”

With a focus on local cuisine, like the beef they source from CR Tormey and Sons Butchers in Mullingar and pork from Horans Pork Shop in Athlone, the “classically Irish and French style” menu that Shane has designed means that Wineport Lodge has built as reputation as a food destination. “The reason why it does so well is because we have great food and a great location,” says Shane. Regularly changing the menu in keeping with the season, and adding “little twists here and there, with a few influences from different countries”, means diners keep coming back. Shane adds further interest with nods to current food trends, like the current crush on homemade charcuturie, and creative vegetarian and vegan additions, like Grilled Parmesan & Basil Polenta with roast red pepper salsa. “You have to move on with the times and keep up with the Jones’. If you don’t you get left behind.”

Shane says working in fast paced kitchen like at Wineport Lodge is what he loves about the job: “I love the buzz, I love the gratitude you get from guest on a really busy night. I look forward to a really busy service too, it really gets you pumped.” Despite the long, often unsociable, hours, he says he would promote cheffing as a career choice: “I definitely would encourage anyone to get into the industry, because we are running out of chefs.” “But you pretty much know straight away once they come into the kitchen whether they have it or not. Often they come out of college thinking they know it all, but you must have the passion for it. You have to put in the long hours and the hard work and if you do that you reap the rewards.”

While fledgling chefs now look up to him, Neven Maguire continues to be a source of inspiration for Shane, who admires how Neven has grown into his role as an ambassador for Irish food. Shane has huge admiration for Ross Lewis too, and makes sure to fit in a visit to his Michelin starred Chapter One restaurant whenever he is in the capital, and Shane says younger chefs like Conor Dempsey in Amuse, and Karl Breen in Locks Brasserie “are really upping the game.”

Though humble in his own skills, this unpretentious chef has the passion and flair that make him just as much competitor in this “game”. The uninterrupted lake views and natural setting of Wineport Lodge will draw you in, but it’s the cooking of Shane Ennis’ that will keep you coming back.