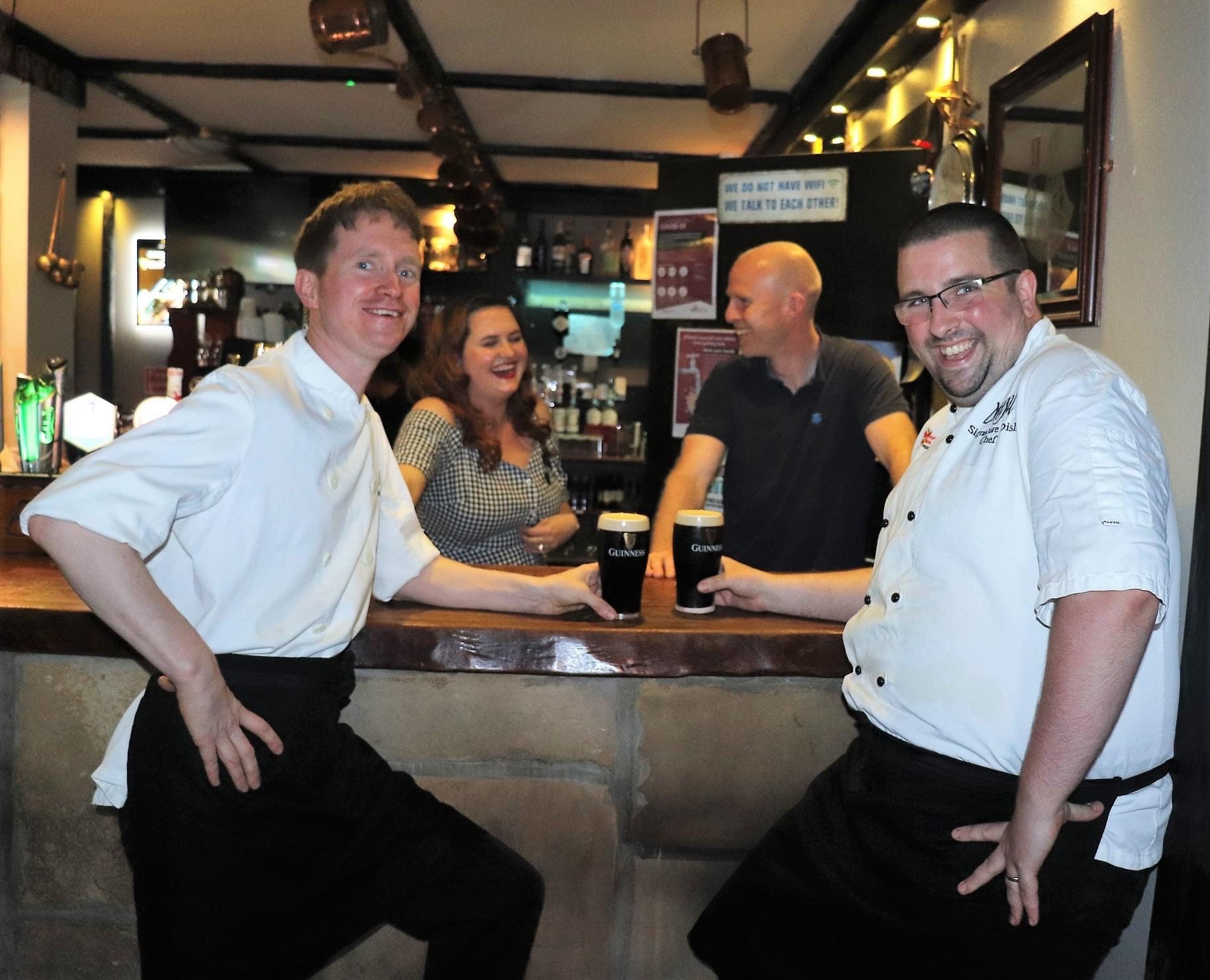 Hard graft amidst a decent working environment has benefits not only to the employee but to the employer. A case in point is the dual career path of Chefs Colin McKee and Chris McMenamin. Now overseeing everything food-related at Biddy’s O’Barnes, Barnesmore Gap, County Donegal, each began their post-college careers at Harvey’s Point, the highly established and regarded hotel on the shores of Lough Eske, Donegal. Colin’s entry job was as a “Commis Chef on the starters section”, while Chris’s was as a kitchen porter. “I really enjoyed the work and was able to really see how the whole kitchen and hotel worked. I knew that it would be my career from then.”

Following graduation from Killybegs Catering College, respective ambitions ran in tandem, with Colin wanting “to be considered one of Harvey’s best chefs” and Chris, following a career break and scratching a travel itch, aiming to “become the Executive Chef at Harvey’s.” Each spent many years there, which perhaps tells us more about the hotel than any glowing review could. As far as Colin is concerned, his reasons for staying there so long included the work environment, management, and the team that developed over the years. The food style, also, matched his “interests in fine dining at the time, and I knew I’d be able to refine those skills.” It was a similar blend of camaraderie and culinary techniques for Chris. “It was truly a great place to work and learn for a chef. There were so many different aspects to the business that you were able to learn everything from banqueting to fine dining.”

As the years at Harvey’s Point passed, so careers progressed. Colin became Senior Sous Chef, while Chris was promoted to Head Chef. To get to these positions took determination and multiple hours of hard work, and I ask what do they think they learned most about themselves during their incremental steps up the career ladder? Chris reveals that he learned to listen, to absorb feedback in a positive way and, crucially, how to work alongside people. He also developed skills in how to productively build and manage a robust team.

All very good things have to come to an end, however, and earlier this year the Harvey’s Point chefs decided it was time to pack up their pots and pans and head for pastures new (but not too far away). As is the case with being somewhere for a long period of time, the need to move on was nagging at them. Colin and Chris knew Harvey’s Point inside out and, if truth be told, they were looking for a challenge. As good friends with a knowledge of each other’s strengths and weaknesses, they say that teaming up made perfect sense.

Their considered move to Biddy’s O’Barnes didn’t just happen out of thin air, however. The pub owners had been keeping tabs on the two chefs for some time and approached the pair about doing consulting and menu development work for a new food concept for the pub. After hearing the owners’ vision for their food, the pub and customers, Colin and Chris knew that it would be a good partnership. Bringing their combined experience and knowledge from Harvey’s Point to a 150-year-old traditional bar was always going to be a test. What did they learn at the hotel that they introduced to the pub?

Kitchen management and menu development had to be implemented to some degree, they admit. “We are talking about a very old traditional pub that up until last year did only toasties in a bag and bowls of soup,” says Colin. “Working with suppliers, especially staying local as much as possible, was a big push as well.” Another important element that made its way across from the hotel was, adds Colin, knowing the value of teamwork. “Not just front of house versus back of house or management versus staff, but everyone working together for common goals.” The food at Biddy’s O’Barnes can be loosely described as gastro-pub style with signature rustic and rich, hearty flavours. It’s a tempting combination that can be repeatedly enjoyed, says Colin, “with a great pint of stout in a relaxed environment of a traditional pub full of character.”

“We want the food at Biddy’s,” adds Chris, “to reflect the location and the history that surrounds the pub. We have a strong local and passing trade, so we want food flavours that pair really well with a pint. The presentation is simple but attractive enough to surprise our diners and be special enough for a celebration dinner or lunch. Although our menu is in continuous development, three dishes especially come to mind as our signatures: Chicken and Leek Pie, which is a take on a traditional dish that Colin’s grandmother used to make; Slow Cooked Beef Bon Bons, with 100% Irish beef from Walsh’s, one of our local butchers; and then there’s a new angle with our Prawn Cocktail, which uses modern flavours such as chilli and lime served with a home-baked chilli/lime savoury scone.”

It has, they confess, been something of a whirlwind experience yet each chef has fully embraced the post-Harvey’s Point challenge. The list of what had to be achieved included setting up a new kitchen, purchasing new delph and kitchen equipment, developing menus, trying and tasting new dishes and, critically, building relationships with customers, staff, local suppliers and the owners.

“I can’t say how much of a positive change it’s been for the both myself and Chris,” notes Colin. “The customer feedback has been phenomenal from locals and passing trade. Both Chris and myself and the owners have lots of future plans to make Biddy’s a true destination in Donegal, especially since they say it’s unlucky to pass – we need to make sure people have another delicious reason to stop!”

Of course, the past 18 months and all of its Covid-related carry-on has impacted Colin and Chris. They each emphasise the benefits of enjoying a much better work/life balance, giving time to their corresponding families while working on something they love and with people they admire.

“We are able to think about what kind of food gets us out of bed in the morning, what kind of place we want to develop as a team and, importantly, the level of the mark we want to make and leave on the Irish food scene not only in Donegal but also countrywide. We both feel like we’re doing exactly that, and so to say we’re looking forward to the future is an understatement.”