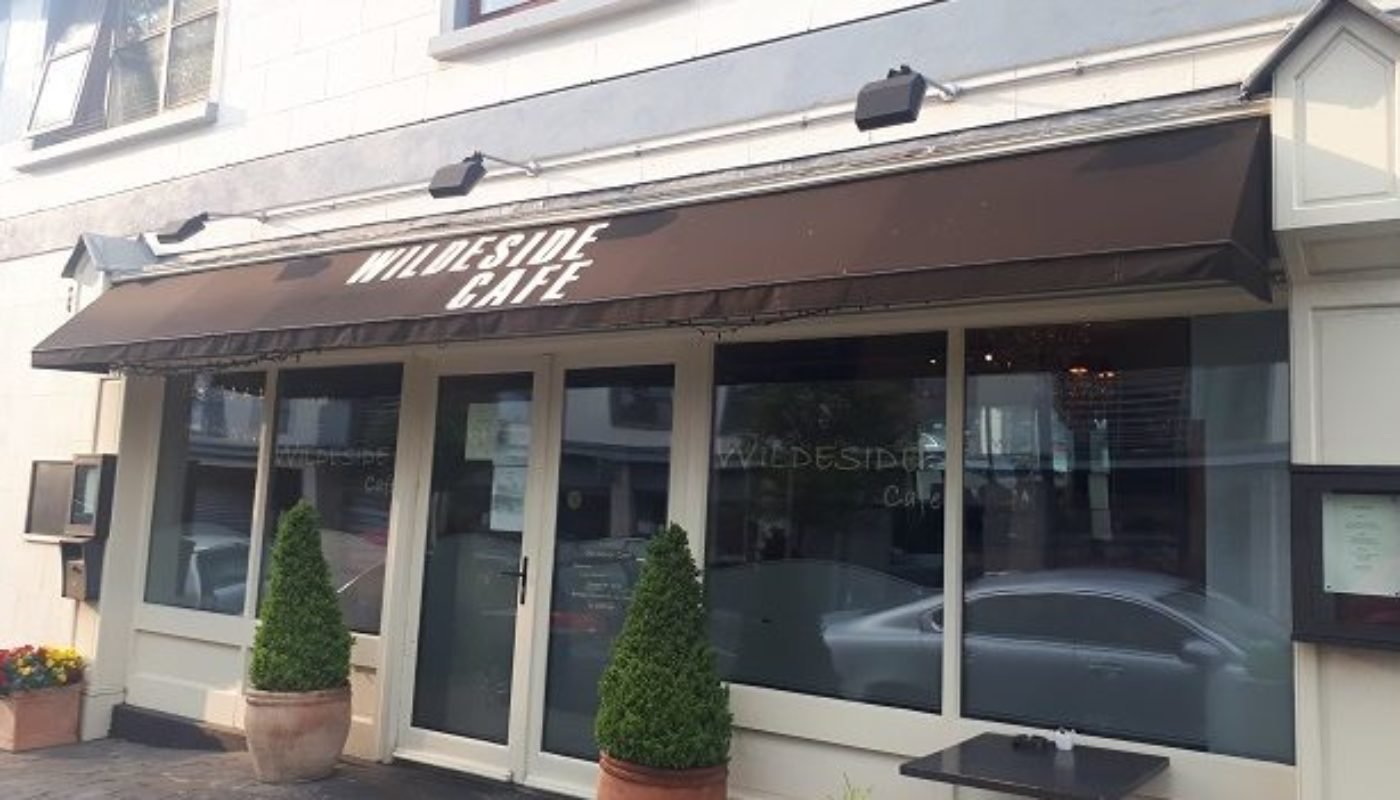 Home » A Walk and The Wildeside – Wildeside Cabinteely Restaurant Review

Summer evenings in Dublin nearly demand migration to the cosy coastal villages we are lucky to have within touching distance of the city. On the hottest day of the year so far, a post work sea-side stroll was non-negotiable – the perfect way to whet our appetites after a day of listening to the Irish summer mantra of ‘it’s nearly too hot to eat!’

While it wasn’t too hot to eat it was certainly too hot to cook, I protested, so having soaked up the rays walking on Dun Laoghaire pier we opted to try out a somewhat hidden gem in the nearby village of Cabinteely. Hopping in the car for an impromptu dinner at Wildeside Café, I hoped the promising whispers I had heard would prove to be true.

A cosy and intimate neighbourhood eatery with just a handful of tables, Wildeside is run by industry stalwarts, brothers Alan and Robert O’Reilly, who previously ran Dun Laoghaire’s Alexis restaurant, a victim of the recession which closed in 2013. With Alan behind the stove and Robert looking after guests, this unassuming little bistro was dotted with locals and I could see why. As we mulled over our choices, we were presented with a basket of sourdough alongside a mound of what we are told was Rewana from New Zealand –  nuggets of deep fried fermented potato bread, which is often called Maori sourdough. Made with a starter culture enriched with potato and allowed to ferment slowly, these little treats were like savoury doughnut bites, pleasingly crisp on the outside with tangy, almost sour fluff within. Dipped into a foursome of flavoursome dips – all housemade, of course – including a garlicky cannelini bean hummus and burst of Med sunshine in a tomato and olive tapenade, this opening act would have made an ample starter in itself. We managed not to devour the whole lot, hedging our bets on the goodness to come.

With Michael O’Meara’s tome-like ode to Irish seafood, the beautiful Sea Gastronomy, within my eye-line I was drawn towards the pescatarian delights dotting the concise menu, split between a set offering and a handful of specials. With two courses for €26.50 and three for €29.50 all night, there was nothing wild about the pricing, although specials were on the higher end of €13.50 for a starter and €28.50 for mains.

My starter of choice would have been a special of Langoustines in Garlic Butter, but Robert broke the news that langoustines had not been available in The Catch, their local seafood supplier of choice that day. Avowed dedication to using only the freshest catch is something to be admired and perhaps the absence of garlic butter wasn’t such a bad thing on date night! Instead, Dublin Bay Kataifi Prawns were a good compromise, a plump trio trapped in a boa constricter hold of crisp Kataifi pastry. Although Kataifi is thought to have originated in the Palestinian city of Nablus, this dish sang of sunny Californian vibes, with succulent sweet prawns within and lashings of mashed avocado. I could have done with a little more mango puree, but all in all this was a promising start.

An exclamation of ‘God, that’s good’ came from across the table as I eyed up one of three petite panko crusted Crispy Pork Hock cakes, or crubbeens, hoping I’d manage to get a bite. Negotiating a limited trade deal, sharp rather than sweet apple was tempered with depth of mustard, earthy, aniseed celeriac and melting strands of pork made for a beautifully balanced, rustic yet delicate dish I definitely wished I had all to myself. Sticking to simple seafood, a perfectly cooked Fillet of Hake sat atop a cassoulet of creamy white coco beans, happily mingled with succulent thick cut chorizo chunks, adding a hint of sweet paprika to cut across the richness of the dish, as did the pleasing acidity of Bodegas Martinez Laorden ‘Ethero” Albarino (€8.50).

Flaking with a fork with all the hallmarks of having enjoyed a browned butter bath in the pan, this dish reminded me that a handful of quality ingredients treated with respect and classic technique can be more satisfying than all the sous-vide sorcery in the world. For the carnivore, a mastodon of a Beef Short Rib slowly roasted with no interest in clinging to the bone sat in glistening Bordelaise. For someone who had pondered if short rib on a sweltering day was a good idea, my dining companion quickly back-tracked after the first bite of the robustly rich and unctuous dish, elevated further with a glass of  a similarly dark and brooding Tuscan La Maialina Chianti DOCG(€8).

Both mains were served with a copper pot of Potato Dauphinoise, well made and worthy of more than a cursory taste indeed and while my saintly side would have preferred some greens in lieu, I couldn’t fault this comforting classic side. As every plate presented to us returned to the kitchen clean, we did consider foregoing dessert in favour of sampling the ample by the glass wine offering, half a dozen of each, curated by Robert who also wears the hat of sommelier. Fullness groaned and wisdom regarding moderation reared its ugly head but both were drowned out by desire upon spotting a nondescript Baked Chocolate and Salted Caramel creation on the dessert menu – how bad could that be?

Presented with a bulging filo parcel I muttered briefly about more pastry but very quickly shut up upon tasting. This was a golden gift of pure chocolate indulgence, oozing yet crispy, salty but sweet, heightened with flushes of hot and cold and possibly the most bowl-lickingly delicious salted caramel sauce I have ever gotten my mouth around. We often joke about wars of spoons when it comes to sharing the final course, but this dessert was the second coming of the Battle of the Bulge. Our bill, for two starters (one special), two mains, a shared dessert and a glass of wine each came to a decent sum of €81 for what was well and truly a feast. Wildeside delivers on all fronts, warm and inviting service, simply conceived and consistently well executed, albeit rich, fare with each mouthful worthy of the indulgence.

If you decide to take a walk on the Wildeside, be ready to need another brisk walk afterwards, as we did. That said, I think I would walk from Ranelagh to this neck of the woods to get my greedy hands on that wickedly delicious chocolate parcel again.