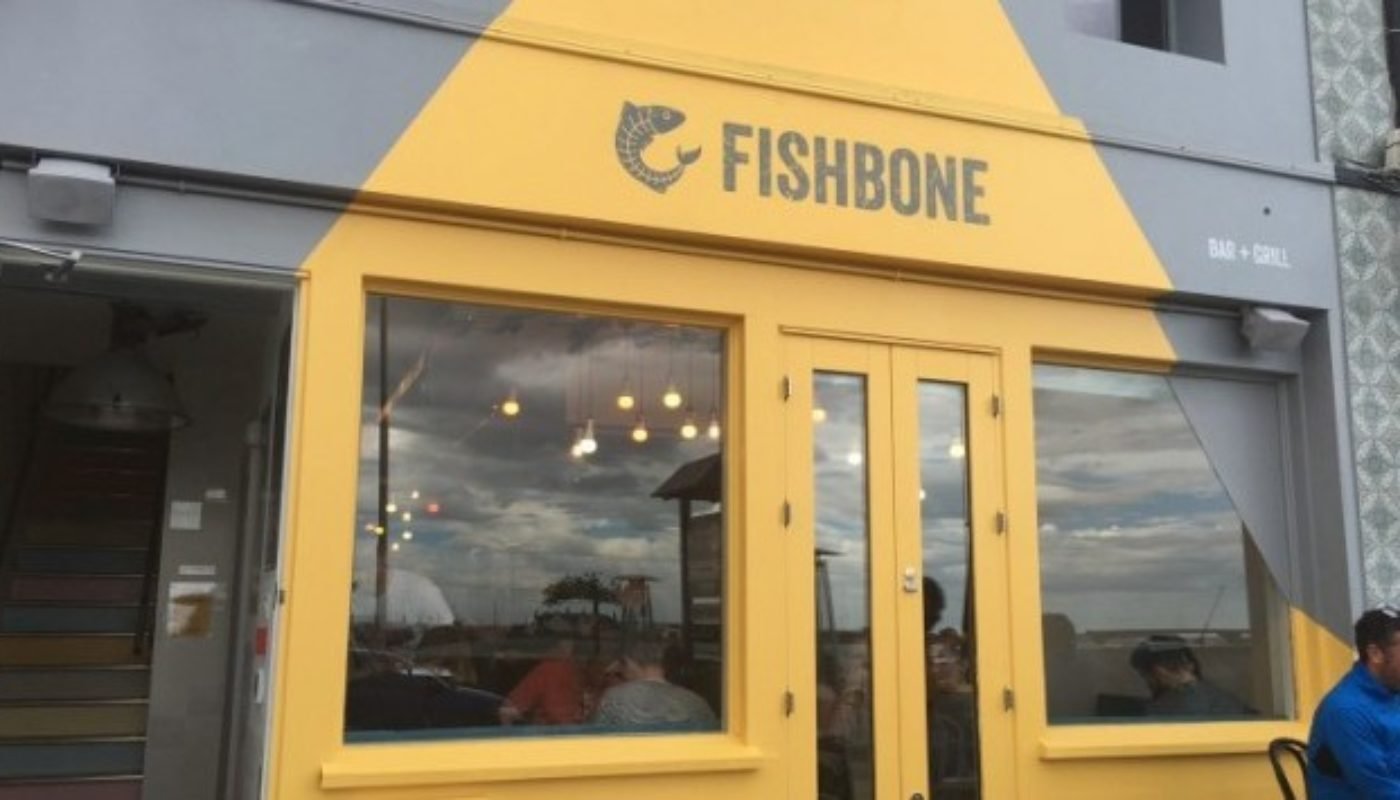 We’ve all been there, Saturday afternoon, after a week of excess, with a grand plan of being “good”, being, dare we say it healthy. “Let’s go for a cycle down to Bull Wall, along the sunny Clontarf seafront”, well that was the plan and in fairness it was almost executed apart from the delicious diversion we made when we finally arrived at the famous wooden bridge. We had reached a crossroads, the saint on our shoulder saying turn right and continue on your healthy path, but the sinner was shouting a little louder, left God damn it left, there’s a new spot in town and it’s bright yellow facade has Taste me written all over it, well not literally but you get the drift.

Fishbone is the latest addition, (we known another one!) to the Dublin dining scene, previously famous for the popular Restaurant 1014 and more recently Papillion. Anyone even vaguely familiar with Clontarf will know one of the most popular venues in the area Bay is constantly busy and after 13 years in business that is an impressive feat. Bay had always been seen as a bit of a trail blazer, introducing calories on menus and healthy option for the whole family while still retaining a warm, suburban feel. They were doing this long before healthy joints became cool and when an opportunity last June came up to acquire the premises where Fishbone now stands the guys jumped at it.

Rather than duplicate the successful recipe they had in Bay they had taken it to a whole new level. The entrance has been designed to catch your eye, make you stop in your tracks and peek inside. With outdoor seating and sea views they already have an enviable advantage over many of their competitors. However it is inside that excited us the most, casual, colourful and arty, with simple furnishings that are reminiscent of a seaside shack yet other little touches like the moroccan styled tiles, colourful exposed bulbs and quirky chalkboards give a fresh and unique vibe to the place. As we ventured in without a booking we were beyond lucky that a free table, all be it a pretty small one became available. The brunch menu was just finishing up and the dinner menu is available all day which we loved as there is an abundance of dishes to choose from. As the name suggests seafood weighs heavily on the menu that has been well designed by Executive Chef Foued Belabbas, but there are other option for less sea fearing people out there such as Sticky Pork Ribs (€19), Stripling Steak (€26) or hefty Beef Burger (€16) with sriracha mayo. We began with two fantastic dishes firstly a Lambay Crab Cannelloni (€12), not a heavy pasta dish like you might expect, instead fresh slices of cantaloupe melon formed elegant tubes which wrapped around some of the lightest crab you can imagine, simply dressed with a drizzle of lime and mint watercress. Over the other side of the table a dish of Seared Scallops (€12) almost cause a riot, for a dairy free dish, which we would have never guessed, the flavours of the coconut and pea puree with fried mint were without doubt one of the most delicious pea purees we have stumbled across. If you enjoy scallops you have to experience these. With the seafood starters setting our palates on fire for all the right reasons we stuck to the sea and ordered a medium Lobster (€33) which included any side of your choice and we decided on a tasty curried sweet potato mash with crunchy sprouting broccoli. It arrived Thermidor style and was stuffed to the claws with meaty chunks of succulent meat and slathered in a creamy Gruyère topping, in a word – clawsome. Our second main was equally as pleasing, Howth lobster, scallops, tiger prawns, organic salmon, all in a thai inspired, kaffir leaf bisque cream sauce but set as an Open Seafood Lasagne. This is exactly the kind of dish that sums up Fishbone, exquisitely good quality seafood, showcased in an inventive but approachable way and for €22 represented excellent value for money. After such super plates of food sometimes you’re almost afraid to order dessert, just in case it disappoints and taints the whole evening. At Fishbone however you may be a little more fearful that usual as they have taken the bold (or crazy) decision to display the calories count beside each dessert option. After reading that the chessboard had almost a thousand calories and a small teardrop falling into our lovely glass of As Laxas Albarino (€9) we decided on the slightly less calorific Sticky Toffee Pudding (€6.50); served piping hot, with a scoop of caramel ice cream in a gorgeous little lake of butterscotch sauce, who needs cheeseboards ! We can’t let it be said that the Brownie Sundae (€6.50) we also sampled wasn’t any less gratifying, fluffy and light sponge drizzled in a raspberry coulis with lashings of vanilla ice cream. When you have just had a decadently well made dessert you should be feeling one thing – deliciously guilty and we can confirm we were but we had the bike ride back to ease that.

Fishbone is a breath of fresh sea air, ticking all the right boxes. A great location, friendly staff with food that excites the tastebuds and nourishes the soul. Get in while you can.

Dinner for two including two glasses of wine came to €110