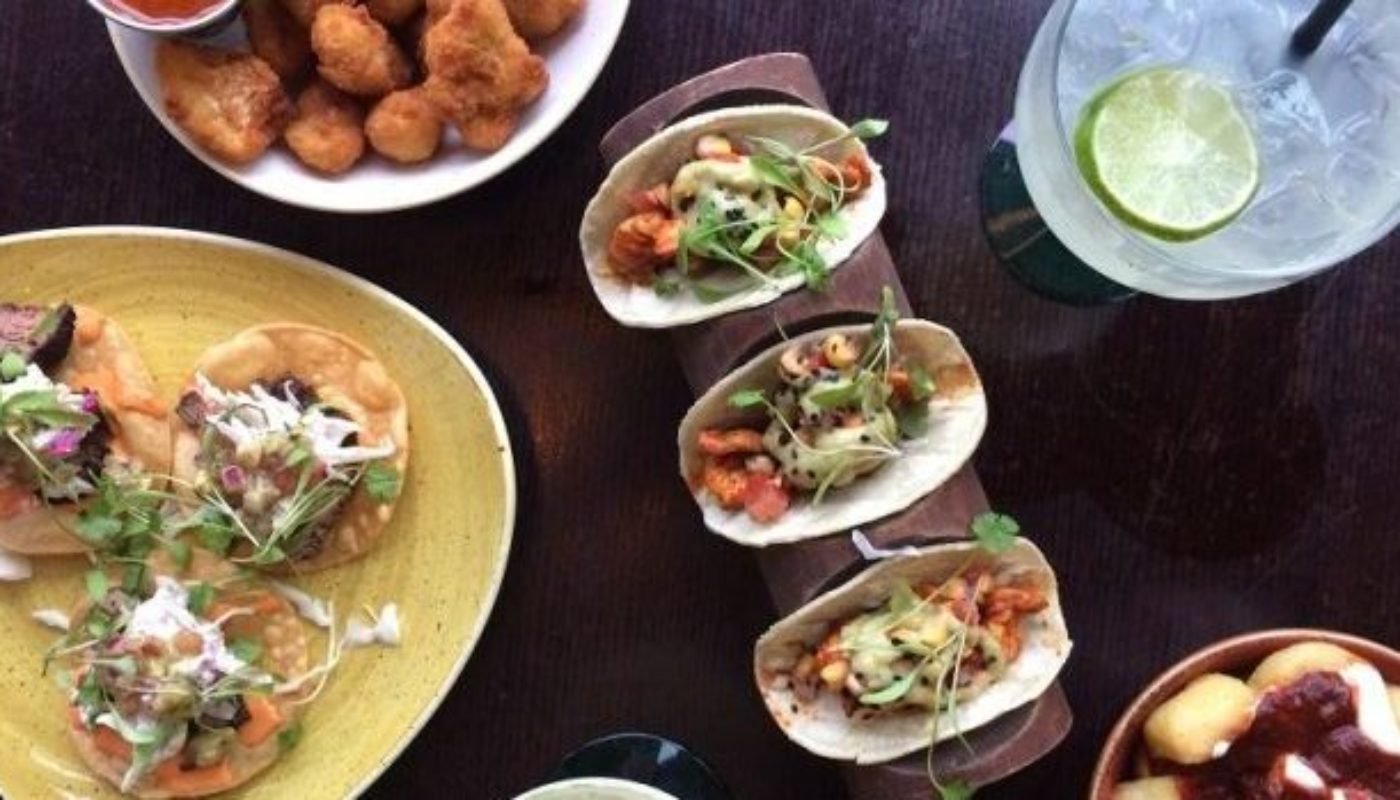 If there’s one habit I need to try to kick, it has to be my propensity to treat bi-weekly trips to Dundrum Town Centre as my birthright. My bank account and general well-being would definitely benefit from taking up a different hobby. Admitting you have a problem is the first step to overcoming it they say, but a recent trip to this south Dublin hall of temptations led me to yet another Achilles’ heel of mine – Margaritas and Mexican flavours.

Having spent a summer becoming a connoisseur of said delights in Southern California (bastardised to Cali-Mexico standards) the first sip of a lip-smackingly lime scented tequila concoction takes me right back. After a recent bout of retail therapy, Rachel and I needed to refuel and decided to check out one of the newer kids on the Dundrum TC block – Oxaca. Full disclosure: the prospect of Margaritas was the deciding factor.

Tucked away on the second floor of a courtyard of casual eateries, from Jamie’s Italian to The Porthouse, Oxaca is the brainchild of the people who brought you Xico on Baggot Street, opening earlier this year. Mardi Gras-like decor greets you at the top of the stairs with vibrant murals, hanging sombreros and curiously, three distinct stalls. Oxaca offers three distinct street food options, not just those from Oaxaca city, so you can hop from “Wok to Ranch” with everything from Asian Bang Bang Pork Lettuce Cups to the Low and Slow Brisket which seemed to captivate all carnivores in recent years. Full disclosure – I am a little tunnel visioned in my pursuit of guacamole and other such Mexican morsels so we were ignoring the missing ‘a’ and heading straight for Oaxaca city. Kicking off proceedings with one of each Margarita option – Frozen (€9), spiked with Olmeca Gold and the more grown up Altos Plata laced On the Rocks(€11). While the former was the sweet slushy variety I secretly very much enjoy, we agreed that next Margarita Monday we’d be availing of two for one of the latter, more punchy and less sugary. As I extolled the healthful virtues of 100% agave tequila, we ordered some nibbles in the form of Guacamole & Chips (€4). Freshly fried tortilla rounds – still glistening – were the ideal vessel for shoveling chunky coriander and garlic studded guac into our greedy mouths. Departing briefly from our Mexican theme, as I am known for a fondness for everyone’s favourite low-carb saviour, I couldn’t resist giving Buffalo Cauliflower Wings a go, having seen them dominate the Instagram feeds of wellness gurus of late. Against the advice of our lovely waitress, I opted to coat my ‘wings’ in the most incendiary of Deep South sauces on offer, Chipotle Honey. Maybe my brief hesitation betrayed me, but the wings arrived un-coated, with the fiery liquor kept on the side for liberal dunking – smokey, slighty sweet with a satisfying after-burn.

I am among those who like it hot so was pretty pleased that Rachel didn’t buy into the cauli carry on, which incidentally was in no way low carb with a crisp crumb coating but quite tasty nonetheless. Can cauliflower replace chicken? For most, I highly doubt it, but I did manage half the bowl quite happily – my new not so guilty pleasure perhaps.

We agreed that it certainly needn’t be Tuesday to indulge in a Taco feast and Oxaca makes this all the more tempting offering both Taquitos and Tostadas. Soft corn tortilla Taquitos came in three tempting variations, from baby back rib Barbacoa and Chipotle to Pollo Adobo, a pulled chicken and smoked crema creation. Rachel opted for the Camarones (€11) – prawns to you and I – tossed in Achiote, the mild but peppery ground annato seed spice common across Latin America. Three generously filled taquitos hit the right notes with blackened sweetcorn kernels popping a hint of charred smokiness into the mix. Alongside some Papas Bravas topped with yet more seductively smokey mole, these would make great sharing plates, if you aren’t greedy. If (like me) you are prone towards greed, you can sample all three variations of Taquito, two of each, for €18 . The same goes for Oxaca’s selection of three different Tostadas. I can’t say I’ve ever been sucked into the burrito craze that seems to have swept the city, but biting into my Charred Flank Steak Tostada(€11), piled high and messy to boot, I am reminder of my long-standing love affair with tostadas (Butcher Grill’s Seared Tuna delights rank among my favourite Dublin dishes).

Flank is a cheaper cut which needs a little pampering, a long marinade bath to tenderise, followed by a charcoal treatment to make it a carnivore’s delight, in this instance sitting proudly on crisp tortillas under a refreshing mint and red onion slaw, more of my prized guacamole and a vibrant red pepper aioli. This isn’t complicated food, but it is the kind of easy breezy California-style Mexican comfort I often crave and my plate went back clean. Agreeing that we definitely showed too much restraint in our initial order (pulled pork tostadas were a mised opportunity), dessert was non-negotiable. A towering Chocolate Peanut Butter Sundae (€6) and two spoons was just what the doctor ordered, with layer upon layer of the irresistibly mouth-coating sweet saltiness only PB can bring and enough ice cream to send you to bed in a dairy coma – wicked but oh so worth it. Frenetic shopping and navigating the always crowded Dundrum TC can be exhausting, but we both felt Oxaca was a great choice to kick back, refuel and indulge in crowd-pleasing comfort dishes with a side of people watching.

The buzzy and fun atmosphere at Oxaca (I definitely clocked a few 90’s classics on the soundtrack, much to my delight) means you could feasibly linger and eat your way through plate after plate and likely many more than the one Margarita each we sensibly stuck to. Our bill for two Margaritas, two starters, taquitos, tostadas, papas bravas and a shared dessert came to a decent €66.

Now that I know laid back, pocket-friendly and damn tasty Mexican bites and Margaritas are on offer at Oxaca to round out my little shopping sprees, I’m seeing plenty of positives. Cue an environmentally friendly Darina who will definitely leave the car at home in favour of the Luas next time Margarita Monday at Oxaca rolls around!