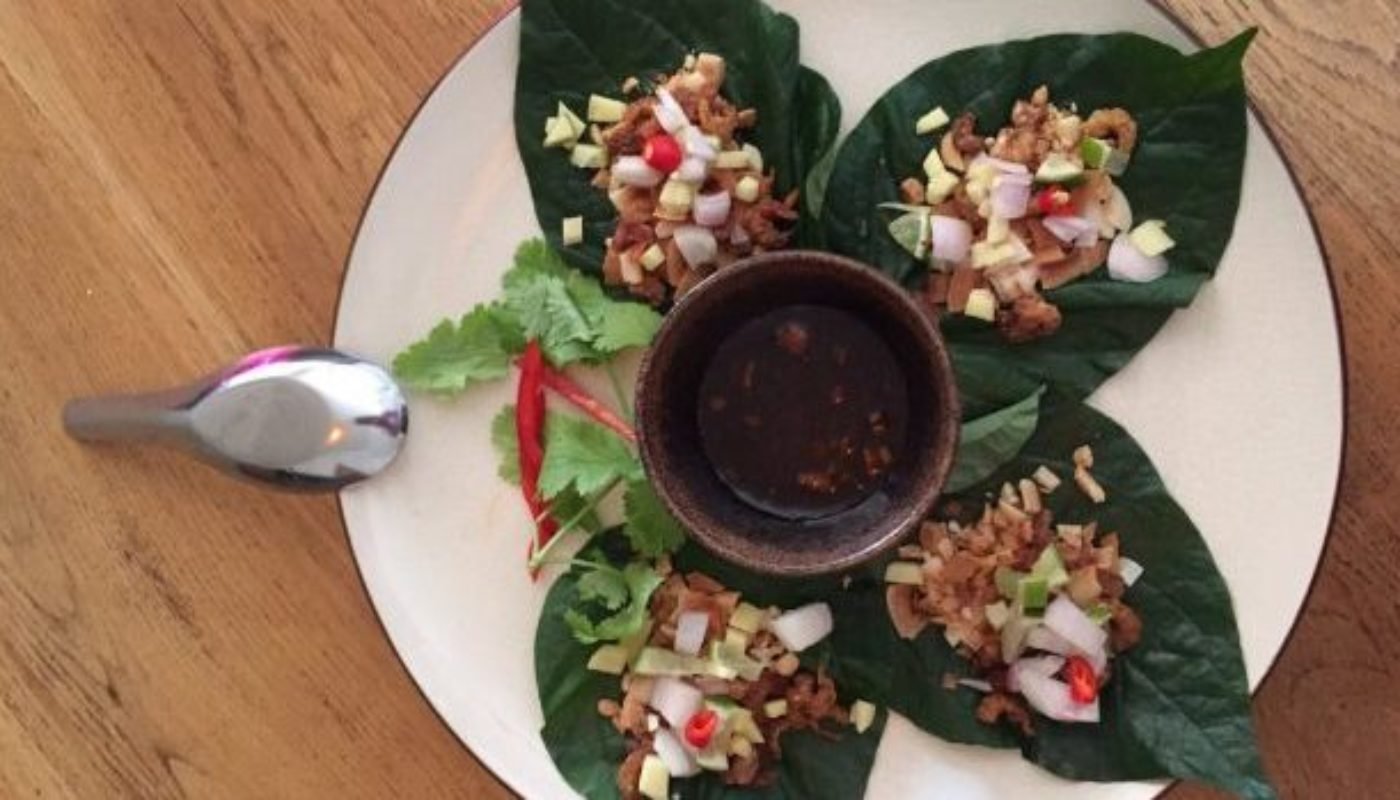 Ranelagh is widely considered to be a little foodie gem, and rightfully so – you can indulge in everything from Swiss fondue at Edelweiss and some of the best steaks in the city in Butcher Grill or throw a chicken wing feast in Tribeca. I love living in this little corner of D6, and it definitely comes alive during the weekend witching hours of brunch time.

Nightmarket is the newest addition to Ranelagh’s thoroughfare, housed in what was most recently ‘An Bhialinn’ and Eatery 120 before it. I’ll admit, when I first spotted ‘Nightmarket Thai Restaurant’ etched across the window, I sighed briefly, thinking another run of the mill Asian joint was the last thing Dublin needed. It was only when I learned that Conor Sexton, formerly of stylish Asian eatery Koh in the city centre, has returned to the D6 village where he earned his stripes as manager of Diep that my interest was piqued. Seeking to bring an authentic taste of regional Thai cuisine to Dublin, Conor has teamed up with his partner Jutarat Suwankeeree, also ex-Koh, opening Nightmarket just last month. Juturat herself hails from Chang Mai, injecting a native understanding and appreciation of the cuisine into the menu, along with her team of four Thai chefs.

Spotting that Nightmarket offers a weekend brunch alternative to the usual suspects of pancakes and wings, my friend Maria and I decided to shake up the norm. Arriving at 3pm, it seemed like people don’t know brunch is a thing here, which made for a quiet and laid back Sunday afternoon vibe. Thankfully, the decor doesn’t include any of the hallmarks of typical Asian eatery – trinket free and tasteful. Little mismatched cushions on benches overlooking a tiled wall emblazoned with ‘Ranelagh’ was the setting for our semi al-fresco brunch as we opted to sit in the laneway outside – a covered outdoor area is an Irish dream. The cooling breeze swirling through this little alcove would prove to be of great comfort when the fiery heat of authentic regional Thai dishes kicked in, but we’ll get to that.

An A4 list of brunch choices was composed primarily of dishes from the main menu, bar Village Butcher Steak and Sriracha Eggs and a Thai Omelette, concessions to those who can’t contemplate the hybrid meal without an ovo-option. On the cocktail front, I was pleased to see Thai influence carried through down to the last detail – meaning we simply had to sample one each. Basil Smash of Dingle Gin, lychee, Thai basil and perhaps controversially – fish sauce – was the first listed and Maria was braver than I was in opting to give this concoction a go, and she didn’t regret it. Seriously punchy and refreshing both in flavour and innovation. The fish sauce heightened the herbaceous notes of gin and basil and surprisingly worked a treat. My Ginger Bellini was medicinal in a good way, and with a hint of zingy grapefruit and the benefits of root ginger, this surely counts as one of my five a day?

On the food front, a number of small dishes hovering around the €7 range cried out to be sampled and we settled first on Miang Kham. This proved to be as delicious as it was beautiful, with cha plus leaves piled high with ginger, shallots, dried shrimp, peanuts, roasted coconut, palm sugar & shrimp sauce. This richly textured Thai pick and mix was peppered with explosive birds eye chilli – and was quite simply a joy to have in your mouth, with a little bit of something different in each bite. I particularly loved the toasted coconut here, all the deliciousness of one of my favourite ingredients without the heaviness of coconut milk. I will be back for a plate of these all to myself, imminently.

Great balls of fire beckoned next, with Laab Moo Tod revealing itself as a petite dish of crispy ground pork balls, juicy within and boldly scented with the lemongrass and kaffir lime tones of spicy red curry paste. Offering plenty of satisfaction on the crunch front, these were greedily dunked into a sticky chilli spiked dip and wholly enjoyed. Som Tam Moo Ping (€15) was yet another knockout dish, a variation of the ever popular Thai combo of rare beef with ripe green papaya, which appears on the dinner menu. In this instance, meltingly tender skewers of marinaded pork sat alongside a mound of juicy shredded papaya and crisp baby gem lettuce boats you could scoop with. This was an inviting and bountiful dish worth getting messy to enjoy – balanced . A little bamboo parcel of sticky rice was entirely unnecessary and went untouched, I wanted nothing to downplay the sensations of such an exciting and enticing plate of food.

So light, tasty and fiery, salad is ‘yum’ In Thai and Nightmarket will make you see why – every taste but is electrified and there is the distinct possibility of becoming a runny-nosed mess, in a very good way. That said, we were very well looked after by Luca, who offered pineapple juice to cool the chilli jets – but why dampen something so wickedly good? Less incendiary was Nightmarket’s answer to the ubiquitous Pad Thai, a breath of fresh air from the claggy eggy noodles so often delved out in Asian restaurants in this country. Plump and perfectly cooked king prawns danced with glass noodles, with a hint of toasted sesame oil and a pop of tamarind, dazzling with its depth of flavour, texture and vibrancy. Dried shrimp was the umami rich seasoning of choice and peanuts and crisp bean sprouts were speckled throughout, meaning each bite pops with more-ish variety. This was stimulating stuff indeed – hit you over the head flavour, lip smacking, engaging every part of the tongue and commanding tastebuds to stand to attention. Samey brunch fare was a million miles away and we were transported to Chang Mai. Avocado, you’re toast, I thought to myself.

Lychee Cheesecake, shared despite aching fullness, offered a cooling end to the fiery inferno of flavour which came before. This was certainly the most enjoyable encounter I have had with the love it or hate it Asian fruit, and I found my spoon wandering back for another sly bite more than once. Desserts in places like Nightmarket are so often a let down but this one, like Nightmarket itself, proved my preconceptions wrong. Settling our bill, which came to €68 for two starters, two mains, two cocktails and a shared dessert, we were entirely full and wholly satisfied with what had been so much more than your run of the mill brunch. We both felt that we had enjoyed a truly authentic peek into the world of regional Thai cuisine and agreed that at Nightmarket, nothing is lost in translation.

Divine was a word invoked more than once during our brunch at this temple of authentic Thai fare in the heart of Ranelagh, and I could see worshipping here becoming a weekly ritual. Nightmarket’s evening menu is a more extensive offering that I plan to explore as soon as I can. This is invigorating food worth sweating for, with nothing watered down or “Thai-rish” about it.