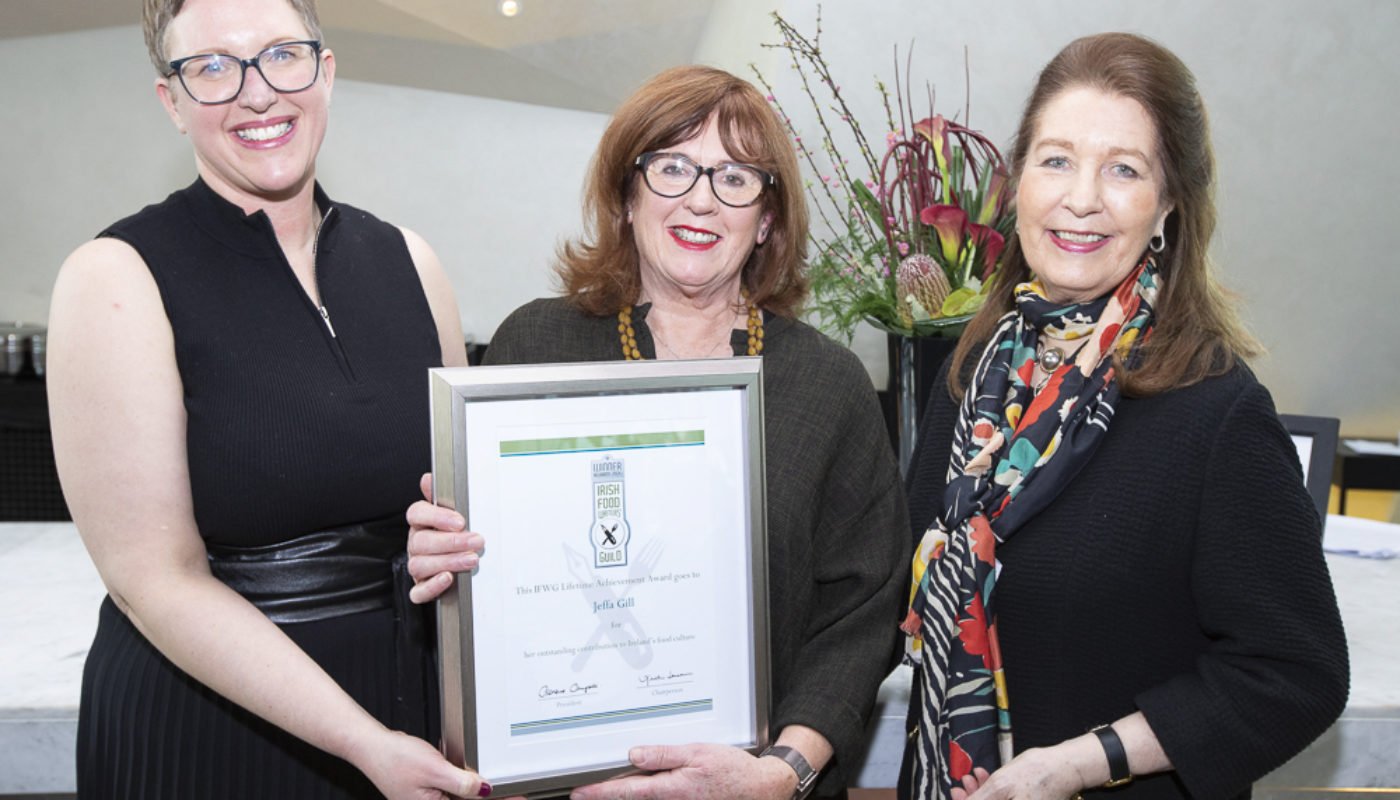 ‘A voice for better eating’ is the leading headline on the Irish Food Writers’ Guild (IFWG) website. You had better believe it, too, for if there is one single entity that advocates (as the website states) ‘high professional standards of knowledge and practice among writers about food, nutrition, food history and related matters, and to assist in the formulation of links and networks amongst all involved in the food industry’, then it is the IFWG (whose sponsor is Bord Bia).

Set up in 1990 by twelve founding members (all of whom were then freelance food writers), it took until 1993 for the annual IFWG Food Awards to be established, but since their inauguration, the awards have become industry standard bearers, widely viewed as Ireland’s most well-regarded and respected. Of course, you don’t have to be a mathematician to know that next year is the 30th anniversary of the awards, and so there will be, presumably, a finely chopped blend of nostalgia and forward planning. Two people involved in such a gentle rollercoaster operation are IFWG Chairperson Caroline Hennessy and IFWG President Georgina Campbell. I chat with Caroline via a fickle Zoom connection to her home in North Cork, while Georgina replies to questions via email. I ask each of them what they think has changed the most about food writing since the inception of the awards.

Food writing, says Caroline, focuses the mind on the importance of the produce. “Writing about food makes people pause and think about it, it shines a light on different food producers, the producing of food, and often gives a voice to food producers that don’t have money for marketing or PR.”

The biggest change regarding food writing over the past 30 years, notes Georgina, is the number and diversity of people across both traditional and digital media that would regard themselves as food writers. “Also the areas covered, with far more interest now in in-depth features about food of all types, our attitudes to it and its production and sustainability, rather than cookery. When the Guild was founded in 1990, there were just twelve of us, and it being long before the arrival of multicultural Ireland or the digital revolution, we shared quite a traditional outlook.”

The DIY Dozen, recalls Georgina, were called cookery writers, the collective primary goal to “encourage practical home cooking at a time when convenience products were becoming the norm and skills were no longer being passed on generationally. Recipe development was the main tool – plus ca change – but at the same time we were also keen to nurture a sense of pride in Irish food culture and history and to recognise small and some larger producers, and others who promoted the same philosophy and aims.”

“Our members look at everything from the history of Irish food culture to developing food literacy,” observes Caroline, “eating on a budget and podcasting about international food and the people who make it in Ireland. One thing hasn’t changed, however: the Guild was set up to promote high professional standards for food writers, and we still focus on that with our guide on best journalistic practice and annual CPD events.”

As such, the awards have maintained a high benchmark of integrity regarding the nomination and judging process. I ask Georgina was that standard difficult enough to maintain as the years passed, which have, of course, unleashed numerous similar awards.

“Oddly enough,” she replies, “I don’t think there was ever a problem there. Integrity has always been the foundation of everything the Guild stands for and there have never been any signs of that slipping. Also, while there are now many other awards, they are mainly commercially-driven, so there aren’t many similar ones.” Georgina says the only comparable accolades are the Euro-Toques Food Awards, which, states its website, ‘aim to recognise the very best artisan food producers currently working in Ireland.’

“They are independently nominated and voted on by Euro-Toques member chefs and cooks,” adds Georgina, “in much the same way as ours are by our members and, although industry rather than consumer-related, the aims are complementary.”

The IFGW Awards’ voting procedure is explained by Caroline. “Irish Food Writers Guild members nominate three products, which they buy without informing the producers. Indeed, no one can enter themselves or their product into the awards. Similarly, no company knows it has been nominated or shortlisted. The exception to this is the Community Food Award, for which the Guild invites nominations every year from the general public as well as our own members.” Products are tasted and then discussed. “Often very passionately,” she admits. “For some strange reason, we are all very opinionated! The products are then voted on using the proportional representation method, and after the judging is completed the winners are contacted by our Secretary, Kate Ryan.” It would really warm your heart to read the responses, says Caroline. “These producers don’t even know they’re in the running for an award, so it comes as a very lovely surprise.”

The importance of the awards is such that even to be shortlisted is quite prestigious. I ask Georgina is that how the IFWG awards are perceived: as a mark of quality and assurance? “Their integrity is well recognised,” she confirms, adding that except for the Community Awards, there are no shortlists, as such. “At a time when awards shortlists sometimes run to several pages, the small number of IFWG awards, which began with four in 1994, yet with only eight today – not all of which must be awarded every year – also adds to their prestige.”

Prestige, significance, integrity: three weighted words that are by-products of professionalism, attention to detail, and passion for the process as well as the end result. I ask Georgina about the legacy of the IFWG awards within the Irish food industry, and what they mean to it. “I feel they’re an enduring source of support and encouragement for an artisan sector that has never had it easy, but which was far smaller in the early ‘90s than it is now.” Over the years, she adds, the awards have evolved to include a wider range of products (a few years ago, drinks were included as the Irish craft drinks industry expanded) and to reflect a changing society. “They have retained relevance, and in partnership with the food writing, which still includes a strong recipe content, Guild members and the wider media are able to reach people that now see food as a major interest, people that are open to being informed about provenance, sustainability, quality, healthy eating, and so on.”

In other words, there is a willing audience that wants to hear about the awards. “Also,” Georgina continues, “while the Guild as a group doesn’t get involved with activism, some members – including Darina Allen, who is on a mission to make school cookery classes part of the curriculum, and Michael Kelly, who is changing the world through Grow It Yourself – are making a real difference, and other Guild members are proud to be part of the support teams for such endeavours. This often involves promoting award winners past and present, among other things, so it could be said the awards don’t exist in isolation, that they’re all a part of an organic family of activities.”

In North Cork, dodgy connections notwithstanding, Caroline agrees. “We are fortunate to have such an incredible range of locally produced food and drink of the highest quality in Ireland. Every year we highlight the incredible work achieved by small, independent Irish food producers and organisations. These are the people that make the Irish food story such an exciting one and why we want to celebrate them.”

Interview with Georgina Campbell & Caroline Hennessy of The Irish Food Writers Guild By: