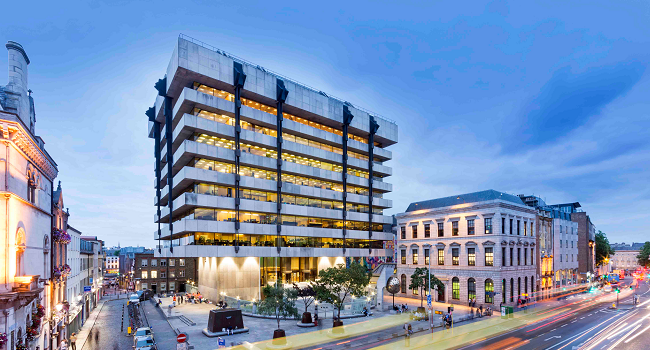 The iconic former Central Bank building on Dublin’s Dame Street was sold last January for €67 million to a group of international real estate investors and is now undergoing works before the new tenants move in. A rooftop restaurant and bar has been confirmed among the planned features for the soon to be refurbished building.

John Paul Construction has been tasked with the job to update the infrastructure. The firm is behind high-profile developments such as the Ferrybank Shopping Centre and the Harcourt Street Office Block.

Hines and Peterson Group, the international real estate companies overlooking the site, have received a loan of €100 million from HSBC to redevelop this and some adjacent locations, The Irish Times reported. This is the first incursion of HSBC into the commercial property lending market in the country.

The Central Bank building was completed in 1979 and is one of the area’s most iconic sites, often used as meeting point and surrounded by restaurants, cafes and the popular area of Temple Bar. With the upcoming pedestrianisation of College Green and the new LUAS line, this part of Dublin city centre will soon become even friendlier to visitors and tourists.