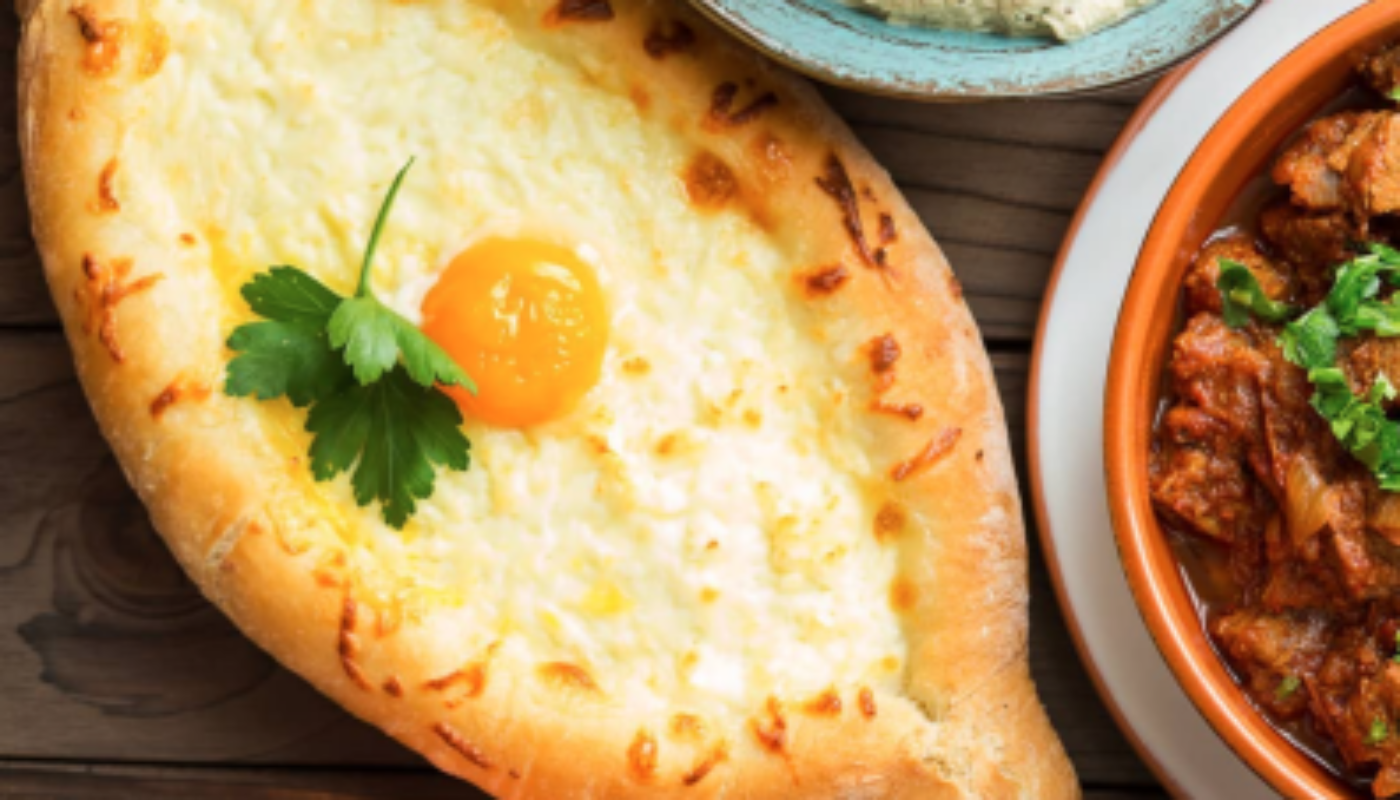 An Irish Twist on Georgian Cuisine by Ryan Mangan and Mariam Abuladze.

If you were to quickly research Georgian Cuisine, you would find no shortage of travel and food bloggers ardently logging their food diaries as they make their way across the beautiful Caucasus country. Intersecting Eastern Europe and Western Asia, Georgia has a rich history deep-rooted in a variety of different cultures dating back hundreds of years. European, Soviet, Arabian, Persian and Ottoman cultures, amongst others, have amalgamated over the years to create Georgia’s own unique identity as it is known today; a country full of outstanding food and drink and very hospitable people. One of the first things I read about Georgia that has stuck with me since was that the Georgian people have traditionally viewed visitors as gifts from God, which explains the warm Georgian welcome that’s felt upon arrival into the country.

A few of the travel bloggers I came across before visiting had mentioned that Georgia was home to some of the most underrated food they had ever tried, but as I sat at a hilltop restaurant in Tbilisi last July, with a panoramic view of the city below, I could have argued that it may just have had some of the most stunning scenery too. The first meal I ordered there was a delicious cheese-stuffed Imeruli khachapuri (I will discuss this later) and a fresh tomato and cucumber salad with a walnut sauce.

After enjoying my food, I remember watching the sun glisten over the rippling Mtkvari river below me, and relaxing to the mixture of cheery crowds and live music which rose from the heart of the city; the sweet aromas from my glass of red rose along with them as I swiveled my glass. One of the first conversations I had had with a Georgian person in Tbilisi was the lady who had served me at the same restaurant. She had gone out of her way to make me feel comfortable and explained everything she could about the wine I drank and the food I had ordered. From then on it was confirmed for me that hospitality is, in fact, a core defining feature of Georgia. 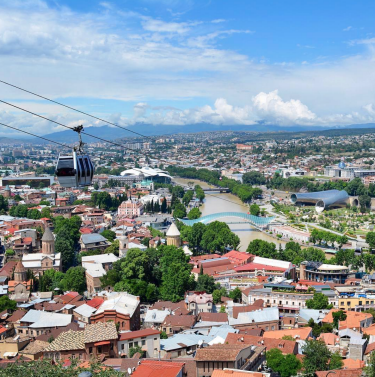 Khachapuri, which I have already mentioned, is as deep-rooted in Georgian culture as a Shamrock is a symbol of our Irish national identity. With over 50 different types of Khachapuri associated with different regions of the country, it is a traditional Georgian dish of cheese-filled bread. Depending on which type you try, the bread is molded into various shapes, and filled with a mixture of various cheeses, eggs, and other ingredients. Imeruli khachapuri, which was my first to try, is considered to be the most popular type. This type is a pastry infused with yeast and white salted cheese. I would consider Adjarian khachapuri, with its distinctive boat appearance, to be the most popular ‘social media’ type of khachapuri. I find this type the most intriguing based on its distinctive appearance and the interesting background to its creation. Legend has it that a long time ago in the Adjari region of Georgia, located along the coast of the Black Sea, there was a fisherman who had a golden-haired son. The boy loved the sea and always said that he wanted to become a fisherman when he grew up. One day he stole a boat and entered the sea alone. His father searched for him for weeks without any luck finding him, or the boat. It was this boy’s mother who created the boat-shaped khachapuri, with a yellow egg inside, to honor his memory and hoped that one day her son would return. 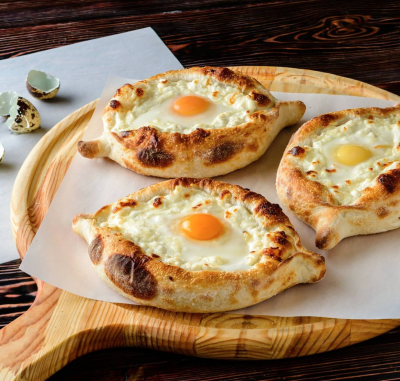 Khinkali, another national dish of Georgia, was just as exciting to try and impressive to me. The best way to describe it is as a silky smooth dumpling (but don’t call it that), filled with a variety of vegetables, meats, and spices, decoratively twisted into a tight knot at the top which is used as the handle. Like other Georgian dishes, varying regions of the country have a big influence over the distinctive fillings and the differing ways the khinkali is made. Apparently, within the mountainous regions of Georgia, lamb is the most common filling, but overall, the most common khinkali fillings are beef and pork. Vegetarian versions are available too, made with traditional Imeretian cheese and vegetables such as mushrooms. Holding the knob at the bottom of the khinkali, you bite around the top, tilting it back to drink the delicious juices before biting into the succulent meat. I tried both the meat-based and vegetarian types while I was there and, needless to say, I reordered them a couple days later.

Many researchers state that the shape of khinkali resembles Borjgali – a Georgian symbol of the Sun and eternity. Khinkali is supposed to have exactly 28 ‘folds’, just as the solar cycle is a 28-year cycle of the Julian calendar. Traditionally, khinkali was made on Sundays – the day of sun, which aggregates the suspension that maybe Khinkali and Borjgali are related. Some also believe that khinkali was brought to Georgia by Mongolians, who themselves took this dish from China. Classical khinkali is filled with lamb (originated from Tusheti, a mountainous region of Georgia) or a mixture of beef and pork (Kakheti). Some regions fill it with potatoes (Meskheti), and in the mountainous regions of East Georgia, they even mix the meat with cottage cheese.

Georgia is also considered to be the ‘cradle of wine’, as archeologists have traced the world’s first known wine creation back to the people of the South Caucasus in 6,000 BC. These early Georgians discovered that grape juice could be turned into wine by burying it underground for the winter in a special large earthenware vessel – Qvevri – used for the fermentation, storage, and aging of traditional Georgian wine. The most well-known region for producing Georgian

wine is Kakheti, divided into the two micro-regions of Kvareli and Telavi. The most famous wines are: Saperavi, Rkatsiteli, Kindzmarauli, Cicka-colikouri, Khvantchkara, Tvishi, Usakhelauri and so on. Wine is an integral part of the Georgian Supra – a traditional feast and a very important part of Georgia’s social culture. Supra is always led by a tamada, or toastmaster, who introduces each toast during the feast. 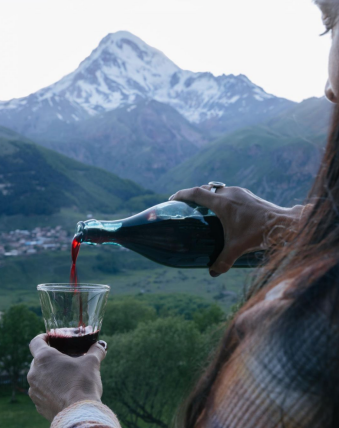 Due to the rich wine culture, other alcoholic beverages were not as popular in Georgia. Moreover, drinking vodka was at one time considered to be frowned upon – vodka was more so used for its healing properties. Of course, this is not true today and you will find varieties of Georgian vodka (chacha). Each region, like in the case of wine, has its own traditional way of making vodka. Kakhetian vodka is exactly like the Kakhetians, as a people; it’s calm and unhurried and makes you slowly but surely drunk. Megrelian Vodka makes you drunk very quickly but the hangover is a lot easier. And if you drink chacha from Mtiuleti, you’ll end up being drunk without realizing it.

Georgia is certainly a destination to be enjoyed for its scenery, culture, people, interesting history, and especially for its rich abundance and varieties of food and drinks. I tried my best to imitate the Adjarian khachapuri recipe to give you a slight taste of Georgia. If the chance arises for you to extend your travels to this beautiful country in the future, I urge you to go for it! In the meantime, I hope you enjoy my Georgian-inspired khachapuri and walnut salad recipes.

For the khachapuri dough:

For the mix within the khachapuri:

1. Begin by making the khachapuri dough. I first attached the balloon whisk to my Kenwood kMix electric mixer, and added the yeast and water to the mixing bowl first. Mix the wet mixture until the yeast is well mixed into the solution. I then added the oil, salt and sugar and mixed again well.

2. Next, add the dough hook and begin at the slowest setting. Add a quarter of the flour, mix for a minute, take the bowl out and use a spatula to clear any flour stuck to the mixing bowl. Repeat this process four times. When all of the flour is added to the bowl and scraped off the sides, keep the dough hook running slowly for a further 5 minutes.

4. Roll the dough out onto a sterilized countertop sprinkled with some extra flour. Roll the dough into a ball and place it back into the mixing bowl. Cover with cling film and leave to rise for an hour minimum.

5. Tip an egg into a mixing jug, followed by the 3 cheeses and mix very well. 6. Place the dough onto a counter and cut, down the middle, into 2 separate pieces (this makes 2 khachapuri pieces).

7. As done in my recipe reel, knead the dough into rectangles (placing them on some baking paper will make this easier. Add 2 heaped tbsps of cheese on each side of the rectangle and fold the sides toward and eventually cover the cheese. Twist both ends of the rectangle into a boat shape and cut off any excess dough at the ends. Push the sides out to make space, and fill both centers with the remainder of the cheese.

8. Place the 2 khachapuri pieces, and the baking paper they’re on, onto a tray and bake for 15 mins.

9. After this time, dig up a well in the cheese and pour a yoke into the well (be careful not to break it). Bake for a further 5 minutes.