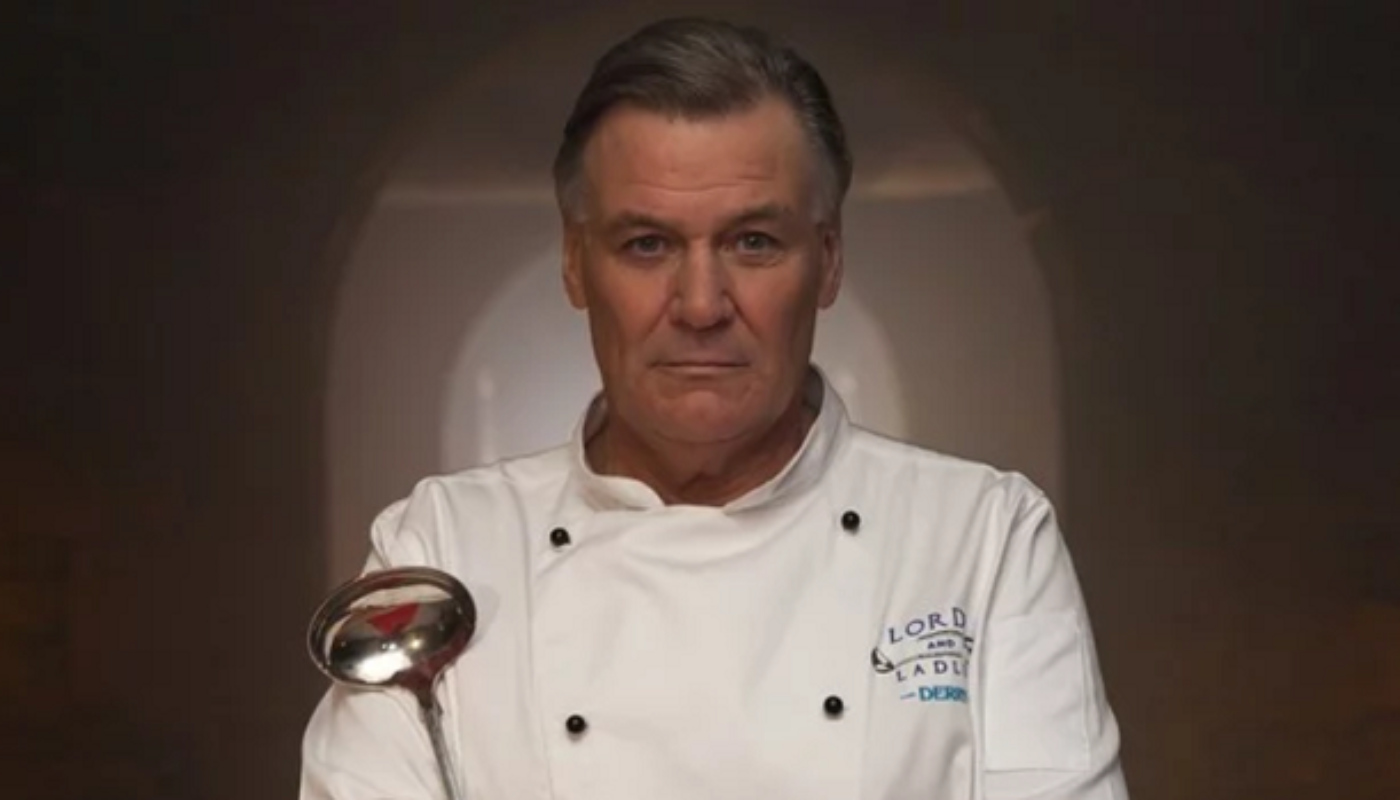 Home » The 7 Dishes That Made My Career: Chef Derry Clarke Shares His Most Memorable Meals

The 7 Dishes That Made My Career: Chef Derry Clarke Shares His Most Memorable Meals

“It’s funny, when I look back at my career and all the dishes, if only I had of kept a record of all the good ones, wrote down the recipes and photographed them, I’d have an amazing repertoire,” muses Derry Clarke as we sit down in his Michelin starred restaurant L’Ecrivain, on Dublin’s Lower Baggot Street.

And while to our loss Derry, one of the most distinguished figures in the Irish food scene, failed to catalogue his kitchen and restaurant experiences, and many will remain lost, or at least untold, there are those dishes that the chef could never forget.

From the private meals of his childhood which provoked his curiosity in food, to the signature dishes at L’Ecrivain that he has shared with countless diners over it’s 28 year history, Derry plotted for us his career via seven seminal dishes.

1. His Mother’s ‘Garlic Stew’ and His Father’s Freshly Baked Bread My parents split up when I was young, so there are two dishes I remember from my childhood. My mother was great for the stews, one in particular I used to call ‘Garlic Stew’, because that’s all it was really; just big cloves of garlic in the skin. I’d say she just got two bulbs of garlic, crushed them and threw them into the stew chicken or lamb slow cooked with potatoes and vegetables. But I’ll always remember the smell of garlic!

My father he used to bake beautiful loaves of brown bread. He was a food importer so at a young age I remember having this bread with cheeses from all over Europe. It used to come in giant wheels, and I always remember going to the warehouse as a kid and seeing the guys cut it to order and sending it to fine food shops all over the country.

He opened the first delicatessens in Dublin, one of Grafton Street the other on Baggot Street. Because of his job, I got to try foods that weren’t widely available at the time, things like foie gras, oysters, and spices from Indonesia. I grew up eating escargots in Dublin! My mother’s sister, Carrie, was a partner in a restaurant in Kinsale, The Man Friday, with Peter Barry. From the age of 12 or 13 I would work there during the summer holidays. I started doing the washing up, did a season in the restaurant but I hated the front of house, and then a season in the kitchen and never left after I finished school.

I remember that just below the restaurant the fishermen would bring in the in wild salmon from the Bandon River and they’d come up right to the kitchen door and the chefs would pick from what they had, oysters and mussels too.

It was so fresh and in season, we used to just do a salmon fillet steak, very lightly poached in a court buillon and served with a hollandaise or buerre blanc and local asparagus. Just like the fishermen, farmers used to come right to the kitchen door selling local vegetables. I worked at Le Coq Hardi on Pembroke Road for four years, under chef John Howard. A very busy restaurant; it was where Charlie Haughey would bring all his liaisons! Back at the time in the early eighties John was definitely cutting edge. It was a step up for me working there, there were only three chefs in the kitchen, we worked hard and long hours.

The Le Coq Hardi Smokies, was a dish that I will always remember – which a lot of places still copy now. It was naturally smoked haddock, he wouldn’t use the dyed stuff even then, cream, tomato and cheese, prepared in a ramekin and baked in the oven.

Another thing that really stood out for me for my time there were the vegetables, the variety and how they were prepared. They were cooked to order and there could have been 14 to 16 different vegetables on every day, and about eight different types of potatoes. Diners could choose whatever selection they wanted.

4. Rack of Lamb at the Original L’Ecrivain

We first opened L’Ecrivain in 1989 in the basement of a building on the corner of Lower Baggot Street and Fitzwilliam Street and one of our signature dishes in that ‘old restaurant’ was a rack of lamb.

We used to serve it in this dome-shaped dish, I still have it at home actually. Underneath it was a rack where we put twigs, rosemary, and thyme and so on, we’d blow torch these, put the grate, rack and lid back on and bring it out to the table. When the lid was lifted all the aroma will fill the room, and the servers would cut it and present it at the table too.

We used to do a lot of ‘gueridon’ work, the likes of Irish Coffees, flambé and crepes suzettes, at the table too. I would like to go bring back to the restaurant that sort of trolley service, whereby food is cooked, finished or presented at the table. People love that theatre, it’s a personal moment created just for you. It would be great to see that skill coming back.

We have already gone back to this somewhat however. In September 2015 we opened the Kitchen at l’Ecrivain. This is a twist on a Chef’s Table in so far as it is a Private Dining Room with it’s very own kitchen. The food is cooked in front of you and is your entertainment for the night.

5. Prawns in Kataifi Pastry at L’Ecrivain In 1994 we left that premises, and moved 5 doors up the road, from 112C to our current address of 109a Lower Baggot Street, and bought what had been the Celtic Mews Restaurant. I was in my prime as a chef in those days. For me, those few years were the best we’ve had in this business.

The dish I associate with the early years was prawns wrapped in kataifi pastry served with chilli jam and pickled cucumber. Over forty per cent of the guests would order that dish.

We’re actually planning on bringing that particular dish back soon as part of a ‘Retro Menu’ we are offering to TheTaste readers. Just for fun! They’ll also be a Steak Rossini and a Black Forest, but not as you know it. A restaurant that really blew me away, and not just because of the food but because of the ambiance and the service too, was Arzak in San Sebastian. The first time I went there was 25 years ago, and Juan Arzak didn’t even know I was a chef at the time but even then he was so down to earth, very unpretentious.

His food was simple but at the same time extremely complicated. For example, on my second or third visit he brought me a dish, a poached egg. When I cut the poached egg there was a slice of truffle inside the egg yolk. He said to me “I’ll give you until the end of the meal to figure out how I got the truffle inside the yolk.” He brought me into the kitchen and showed me afterwards.

Now a widely known technique and a signature dish at the restaurant known as the ‘Arzack Egg’, Juan poached the egg in cling film, and for this version he cut open the yolk and put a slice of truffle inside before cooking. Truly inspiring. This is the third incarnation of L’Ecrivain. We bought the premised next door in 1998, and in 1999 we knocked the two buildings down and rebuilt the restaurant as the premises you see today. When we expanded the restaurant, I changed tack a bit and took on Seamus Commons as head chef and we’ve had some great chefs since him, like Stephen Gibson, John Wyer and now Tom Doyle.

I’ve given them a lot of freedom, but while there are changes on the menu the stamp of L’Ecrivain is always using the best ingredients. Once you buy the best you can’t go wrong really. One dish that really showcases this is the scallops. I’ll say it straight out, ourselves and one other restaurant always buy the best scallops, Patrick Guilbauds, and we are always competing for the same ones!

How those scallops are garnished depends on the season, but garnish is only superficial really. The scallops are the backbone, like every dish here the main element has to be the star.