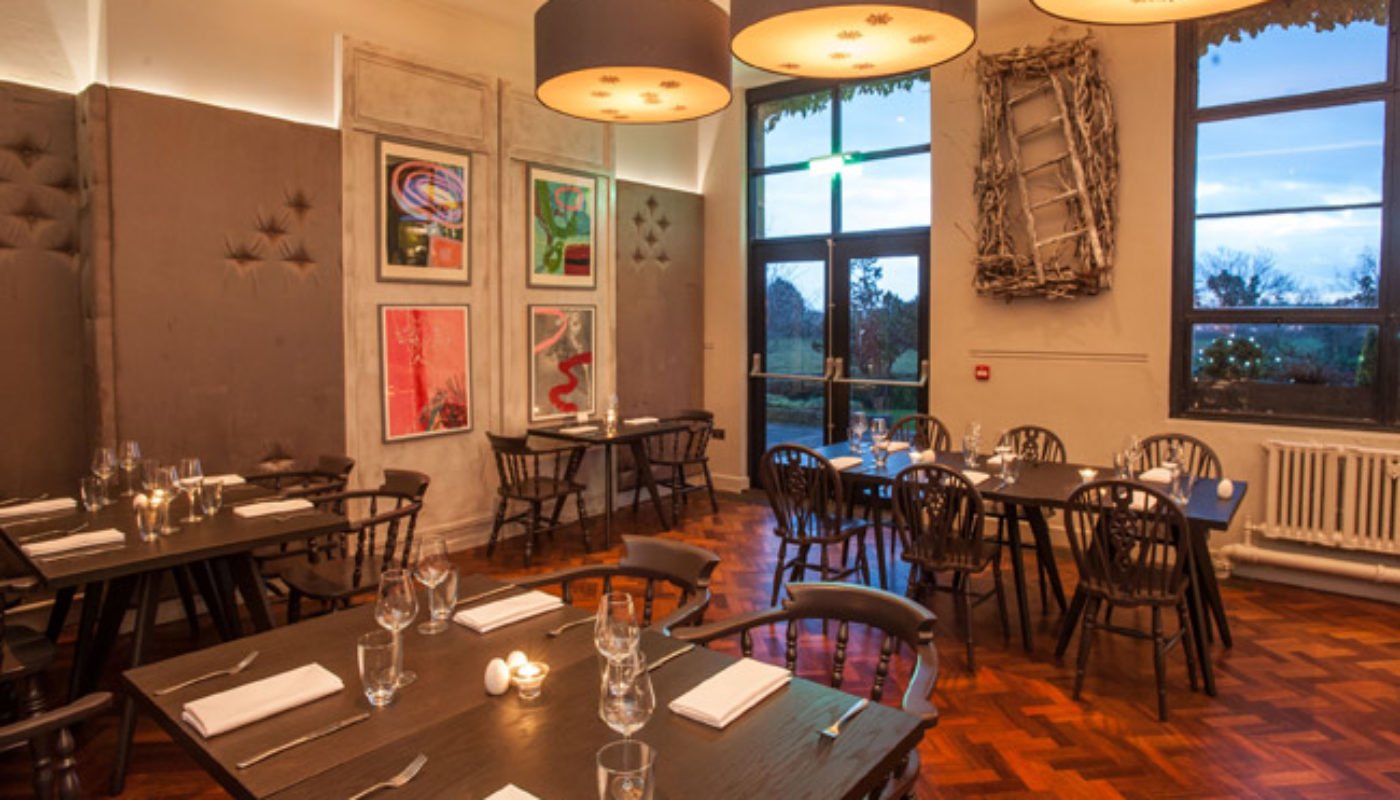 There are some very exciting things happening on the Northern Ireland restaurant scene these days. As such, it’s a shame that in 2014 the Michelin Food Guide did not see fit to award any of its coveted stars to restaurants in the North because there is some seriously classy cooking going on there at the moment; inventive cooking by chefs with a true desire to showcase the wonderful produce that is available.

The Old Schoolhouse Inn with Chef Will Brown at the helm is one such restaurant. Situated in Castle Espie in County Down on the shores of Strangford Lough, it is hard to believe that the restaurant is only about 15 miles from Belfast city as the tranquillity of the surrounding countryside is more typical of a far more remote location.

As its name suggests the restaurant is housed in an old school. Evidence of its original purpose is still present in the architecture of the building and despite being recently re-vamped the dining room retains some of these features. Passing by the old school bell, I managed to refrain from giving it a good jangle but I was SO tempted! There are a number of different menu options available and whilst both the à la carte and set evening menus are enticing, I was won over by the intriguing brevity of the tasting menu which gave one word descriptions for each course, so decided to go for this (for the purposes of this review, I will give more detailed title descriptions).

To kick everything off bread was delivered to the table along with two types of butter; a traditional home-churned version topped with a few flakes of sea salt and also a feather-light whipped brown butter flavoured with dillisk, a seaweed found in many parts of Ireland including Strangford Lough. This butter had a vaguely caramel sweetness but with an underlying nuttiness which was addictive. I would have quite happily eaten it on its own. Two types of bread were presented – soft white bread rolls flavoured with black olives and a delicious brown soda bread which on inquiring further I was told had been made by Will’s mother. With the inclusion of treacle and oats, it possessed a complexity of flavour that was truly delicious and deserving of special mention.

Prior to the first of the tasting menu courses arriving, a ‘surprise’ course of Corned Beef, Cauliflower, Piccalilli, Radish, Cucumber, Quail’s Egg, Sourdough arrived. This consisted of a perfectly sized portion of corned beef made in the traditional style (as far away from tinned corned beef as you can get) and a crispy rissole. These were served with a salad that had been so artfully presented that it almost seemed as if all the component parts were dancing on the plate. Each mouthful was a delight from the creaminess of the perfectly cooked egg to the crunchy sourdough shard, the crisp vegetables and the slight astringency of the mustardy piccalilli.

One of the smoothest Chicken Pâtés that I have eaten was then presented to me. This had been quirkily disguised as a plump little peach and was served alongside an onion chutney that struck the perfect balance between being sweet and sour. Slices of toasted, barely sweet brioche finished this dish off perfectly. Whilst each element was lovely on its own, it was only by eating them together that you appreciated how clever the dish was. In particular, I liked the paring of the chicken pâté with the peach gel – a flavour combination that just worked. A glass of Viognier with its heady peachy/apricot aroma was the perfect accompaniment and complimented the pâté wonderfully.

Steamed Sea Bream, Crab, Strangford Scallop, Mussel, Courgette was next up. Sea bream is one of those fish that chefs love because it is so versatile and can be cooked in a variety of ways yet still retain its succulence. Here it was stuffed with a crab and scallop mousse and was gently steamed. Served on a bed of diced courgettes with a confidently executed flourish of courgette purée and topped with a slightly acidic buttery sauce, this was a dish where everything on the plate, down to the perfectly cooked mussel garnish and the judicious use of sea herbs, highlighted and enhanced the flavour of the sea bream itself.

For me, the Duck, Potato Gnocchi, Turnip, Radish, Parsnip Purée, Broccoli dish was a triumph. Humble root vegetables had been treated with love and respect and presented cooked in a number of different ways to emphasize their versatility. When paired with the meltingly tender duck breast with its wonderfully crispy skin, they together created a dish that was unforgettable. The potato gnocchi was absolutely superb; rich and buttery with a deep and earthy potato flavour, that you don’t often find these days, yet light to eat. A simple but flavoursome jus completed the dish.

The first of the dessert courses served up Lemon Tart with Rhubarb Sorbet, Tuile, Gel & Meringue on Granola. I love both lemon and rhubarb but have never considered using them together, fearful that the inherent sharpness of both would not deliver the sweetness that I seek in a dessert… but they worked wonderfully well together. The lemon tart possessed an intense lemon flavour that somehow managed to get more lemony on the palate as you ate it. It had a velvety almost lemon-curd like texture that completely seduced me. The various manifestations of rhubarb, most particularly the gel and sorbet were a perfect foil for the lemon and were sweetened just enough but not too much so that the rhubarb flavour sang through.

The final course of the tasting menu was a chocolate celebration… Chocolate Tart, White Chocolate Mousse, Vanilla Ice-Cream, Chocolate ‘Wafer’ and Honeycomb – nirvana for chocolate lovers! This dessert played around with textures and presented chocolate in a variety of ways each executed perfectly. The dark chocolate tart was silky smooth and creamy and contrasted with the bed of biscuity chocolate ‘soil’ on which it was presented. The tart possessed just the right amount of bitterness and sat well beside the sweetness of the white chocolate mousse. The crunch of the chocolate ‘wafer’ and sweet honeycomb along with the chill of the vanilla ice-cream excited the palate in all the right ways. This was a lovely dessert, presented beautifully and along with a glass of honey sweet Muscat de Beaumes de Venise was a great way to finish off the meal. I should also mention Scott and Niall who served me my meal. Their knowledge of the ingredients used and enthusiasm for the food they presented me with was borne out of a palpable desire to provide a memorable dining experience. This they achieved and is indicative of the team-based approach that Will Brown obviously promotes within his kitchen and restaurant.

The thing with tasting menus is that as a diner you take the risk of being presented with dishes that you might not otherwise have chosen and might not like but you may also discover new flavours and ingredients. Tasting menus also give the chef a chance to be inventive and experimental. The Old Schoolhouse’s tasting menu is certainly both these things, but cleverly references dishes that are familiar so that the food is not daunting to eat.

Despite the huge amount of time and effort that has obviously gone into each dish, this is food that seems so effortlessly produced. Will Brown is someone who manages to create food that is faultless from a technical perspective but is still full of heart; food that reflects on the dishes we all grew up eating, but interpreted in a modern and playful way. More than anything else though, this is food that celebrates the bounty of the Irish countryside and does it in a distinctive and memorable way.

As an aside, I would also strongly recommend availing of the wonderful accommodation at the Old Schoolhouse Inn. My room was comfortable with every mod-con one could desire and the wonderful Ulster Fry that I had the following morning left a lasting impression.

Tasting Menu: £45 per person (£70 with matching wines) per person for five courses.