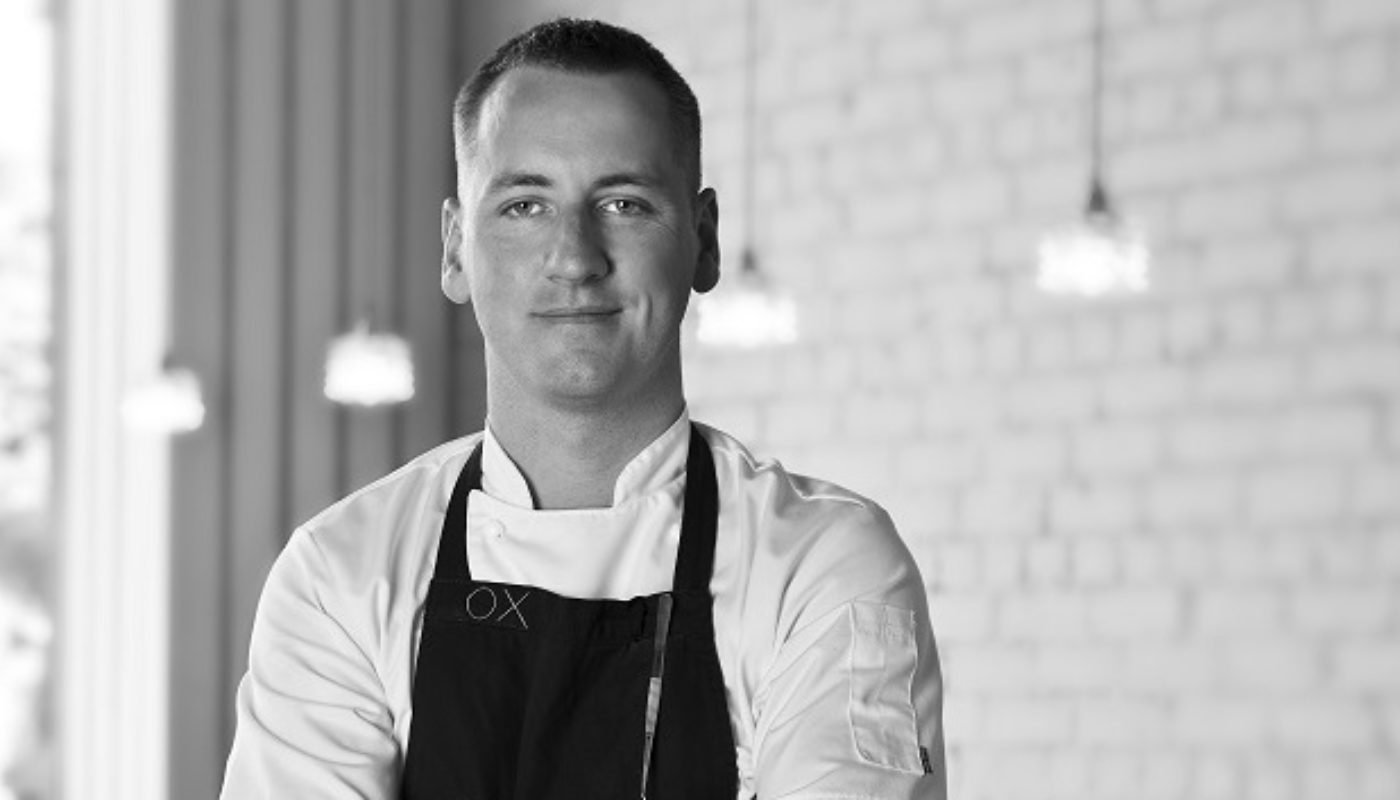 “OX is a beast to run, literally,” Stevie Toman says frankly. “The move from working as a head chef to running a restaurant is like moving from primary school to secondary school, that’s the only way I can think to describe it. You find yourself with a whole new set of problems.”

Before chatting to Stevie, the head chef and proprietor of the Michelin starred restaurant OX in Belfast, I had assumed he would be the quiet type, the default temperament of many a chef when faced with the prospect of an interview. How wrong I was.

Stevie Toman has passion, personality, and isn’t afraid to speak his mind. No better person to handle the wildly successful culinary beast OX has become, taming it with such precision and control that the restaurant consistently produces some of the most beautiful food in Ireland, North or South.

“You have to grow a greater sense of vision” he continues, “you’re now looking not just a what’s going on in the kitchen, but in the front of house and even on social media. You almost have to become two people, but I have no intention of being a chef owner that’s not in the kitchen. The reason OX is called OX is because it’s all about craft, and getting hands on.”

It’s the day before OX‘s fourth anniversary, which coincides with the spring equinox, and he is audibly bursting with excitement to unveil the new menu that champions the bounty of ingredients that the new season brings with it. The opening of OX, in early 2013, marked the beginning of a renaissance of the restaurant sector in the city. Rave reviews were instantaneous, and after just two years it was awarded a Michelin star.

In the same summer the restaurant took away a clutch of other industry gongs; named the hottest restaurant in Western Europe by curators of the World’s 50 Best list S.Pelligrino, and Restaurant of the Year in the UK Good Food Guide, scooping Best Menu award at the 32nd Catey Awards, and was listed among the top eight restaurants in the world by Conde Nast Traveller – and ever since tables in the sparse but chic dining room have become hard to secure.

But once you find yourself settled on one of OX’s wooden chairs, you have front row seats to a captivating performance. From the open kitchen chefs seamlessly communicate and collaborate, before coming together over a table to add the final flourishes to the dishes, creating a sense of excitement and anticipation before they are served.

“It’s a total open kitchen, there’s nothing hidden. We don’t put artwork on the walls because we want the food and the skyline view from the window to be the colours of the restaurant that day,” says Stevie.

“We are always performing. That’s part of the OX experience and it’s something we’ve focused on even more since getting the star. Customers expect a lot more, and I say to my staff that the customer should get the same experience at lunch time on a Tuesday as they do at dinner on a Friday or Saturday night.”

To prevent ‘burn out’, and most importantly to keep up the high level of consistency, Stevie explains how his chefs work a four day week, and that each year he closes the doors of restaurant for a full four weeks.

“This means that the other 48 weeks of the year we are in top form, we take a break for 4 weeks and come back fresh and ready to give it everything again. We are always performing, and that can be tiring.”Stevie himself works five days a week in the kitchen, coming in on Mondays too to catch up on paper work. Despite the stress, and the restaurant’s success, the chef says he sees himself manning the stoves at OX for a long time to come. “At the moment I have no intention of being anywhere else but in the kitchen. I’m only 36, I have many more years left as a head chef.”

“I’m in the kitchen every morning and every single night I am the last person to leave it. My guys have the kitchen absolutely immaculate but I can’t help but go around and straighten a few things up, pot handles, knives, I know it sounds weird but it’s just a thing that I do every single night.”

“There isn’t a single night that goes past where I don’t leave just loving that kitchen. I’m so proud of what we achieved that day and everything we have achieved up until now, and I honestly can’t wait to get back in the next morning. It’s something that I have worked for my whole life and now I am finally doing my own food, in an environment that I’ve created.”

Starting his culinary career modestly in a chipper, after his GCSEs Stevie went straight from the fryer into the frying pan, with an apprenticeship at the highly regarded restaurant Planks on the Lisburn road, followed by Dukes at Queens hotel and Porcelain, in a kitchen run by chef Niall McKenna formerly in the Ten Square hotel. During a chef shortage crisis that Stevie says is far from resolved, staffing remains a constant battle. Based his own experience, he believes a resolution lies in encouraging aspiring chefs to get into a working kitchen environment as early as possible.

“Culinary Arts degrees are very beneficial but I was in my teens when I got started in the kitchen. You became totally seasoned very quickly; you knew what the long hours were about, you knew what a big week was, and you knew what to expect from a high pressure service.”

After a spell in the States, Paris and Michelin star experiences followed, mainly in the then 3 starred Taillevent, complemented by stages at L’Astrance and L’Arpege.

“These three places are where I got most of my inspiration from,” Stevie says. Even after settling back in Belfast, working at James Street South for ten years, he returned each year “to keep in touch with the Parisian food scene.”

It was in there that Stevie met Alain Kerloc’h, a restaurant manager and sommelier from Brittany also working the fine dining scene. When Alain moved to Belfast, his wife Laura’s hometown, the duo found themselves in the same city, with the same ambitious dream to bring something bold, fresh and exciting to Belfast.

Stevie says opening his own restaurant in the city was always the goal, and having passed the ‘To Let’ sign of the building on Oxford Street, overlooking the River Lagan, one too many times he finally plucked up the courage to call the letting agent.

“People said it wouldn’t work down here, there’s not much else going on, and very little parking, but I saw something in that old tile shop, and the room matched exactly was I had in mind for OX.”

He had a strong vision for the restaurant from day one: to provide the same quality of food and attentive service as in the fine dining rooms of Paris, but in a more relaxed, simple environment.

And while informed by their mutual fine dining pedigree, the menu at OX is driven by humble local produce. With imagination, creativity and an enlightened touch, dish after dish Stevie transforms a handful of simple ingredients in to something that provokes excitement and awe. Along with great local proteins, and despite its meaty moniker, OX guarantees menus which pay careful attention to seasonal vegetables and fruit. Fresh produce comes from Drew Fazer, the walled gardens at Helen’s Bay, and Ballywalter Estate in Bangor, with whom the restaurant has developed a particularly symbiotic relationship.

Stevie says that Ballywalter’s ‘specialty’ produce, like edible flowers and fig tree leaves, and the rapport he has built with Lady Dunleath, a food historian, constantly enables and inspires him to create unique, entirely plant focused dishes.

“Vegetables can be so much more than a garnish,” he says.

“Meat and fish look after themselves, but to make vegetables taste great is a challenge. It takes so much more creativity and care.”

He name checks L’Arpege, and Noma among examples of Michelin starred restaurants that are doing visionary things with vegetables, and says it’s dining trend that’s going no where. “Customers want to eat healthier too.”

Unlike many chefs who play down their Michelin star ambitions, Stevie openly and refreshingly admits that getting a stamp of approval in that little red book was always a goal of his.

Relaxed, informal and reasonably priced, he says OX is an example of how there is no set formula to achieving a Michelin star. “The main thing is the quality and consistency of the food.” To temper his point he looks to fellow Michelin star holders EIPIC at Deanes, just a few streets away.

“We were awarded Michelin stars on the very same day and our styles of service couldn’t be more different. EIPIC has white linen table cloths and gourmand style food, whereas our food and dining room is more pared back. And that’s great, visitors to Belfast can dine here one night and at EIPIC the next, and have two entirely different Michelin star experiences.”

The exemplary food at OX is supplemented by intuitive service and a carefully compiled wine list, both spearheaded by Alain. They come together to complete the OX dining experience – a culinary affair that is becoming more bespoke, interactive and global through a series of events and pop up dinners that Stevie has curated. The first OX-with-a-difference event took place on their one year anniversary, when Alain Passard, the visionary chef behind L’Arpege, came to cook at the restaurant; an evening that Stevie says still remains to be topped as a career highlight.

Next, was the ‘OX South’ pop-up dinner at Ballymaloe LitFest. “We finished service at one, half one, and packed everything in the car, drove for five hours, and on one or two hours kip went on to serve some of the most well-known and best regarded people in the food world – it was mad!”

In their most ambitious venture to date, OX crossed the Atlantic and taking over the Dead Rabbit Bar in NYC, run by Belfast friends Seán Muldoon and Jack McGarry. Stevie reached out to the bar to enable his ambitious vision to pair OX’s food with great cocktails, and together they brought to life ‘Ox Meets the Rabbit’. “Where better to do that then at the best bar in the world?”

Just last month Stevie and the ‘OX family’ of chefs took on their next challenge, took on a St Patrick’s day pop-up at Carousel in London’s Mayfair. Part of the Condé Nast Traveller Chef World Series, he served up an Irish inspired feast over three courses, that finished with the resurrection of a ‘boozy’ OX favourite, a play on an apple crumble made with Bushmills jelly, lavender, oats and baked apple sorbet.

“We will never open another OX,” Stevie says, “but by collaborating with restaurants all over the world we can share the OX dining experience elsewhere in Ireland and across the globe.”

Last time I checked pigs still couldn’t fly, but with Stevie Toman as its master this ox has grown wings.