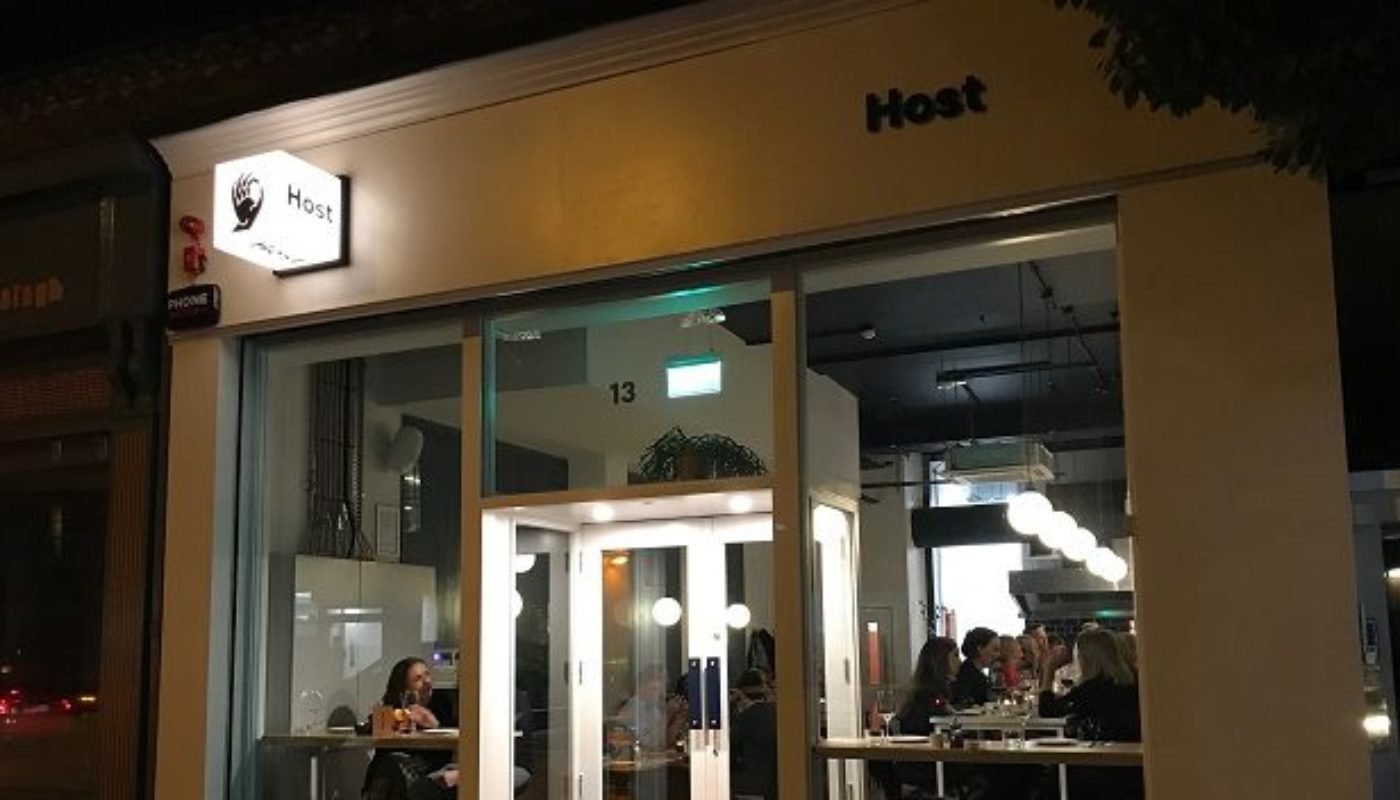 I’ll admit it. As a Ranelagh resident, I was beginning to feel like the advent of neighbourhood restaurants offering superb ingredients-driven cooking at reasonable prices had passed us by. Looking to the likes of Bastible and now Clanbrassil House in Dublin 8, Craft in Harold’s Cross and reflecting on the loss of Brioche, almost like a spoiled brat, food envy had weaseled its way into my consciousness on numerous occasions.

The arrival of Nightmarket did much to quell my pangs of jealousy, being the casual gem that it is, and the fantastically authentic regional Thai fare it offers sees it packed to capacity most nights of the week. To my delight and curiosity, another new kid on the Ranelagh block has appeared and I was very lucky indeed to get a booking on a recent Saturday night.

Newly returned from London, Host has at its helm Chloe Kearney and Niall McDermott, the latter a chef and the former a fashionista turned foodie after a stint as front of house at Bastible. Coupled with McDermott’s years in gastropub kitchens like The Draper’s Arms, they have seen their ambition to bring a little taste of the casual London dining scene home come to fruition with Host’s opening last month.

A skip from the Ranelagh Luas stop and right in the heart of the village thoroughfare occupying a former retail space, Host’s minimalist white fascade would draw curiosity from passers by during the day, but once evening falls the petite space comes alive. Packed to the exposed ceiling vents with diners young and old drinking in the buzzy atmosphere, what Host lacks in space it makes up for in ambience. Orb-like lamps hang over a communal bench which spans the length of the dining room, providing the kind of dim lighting which makes a space irresistibly alluring. My dining companion and I are quite pleased to be seated at the window-side counter top in prime people watching position as walk-ins wander inside hoping to get lucky. They didn’t, but a couple of courses in and we certainly felt like we had – but first, wine.

My seasoned Sommelier friend advised that Host’s short list is just quirky enough, brief but well designed to complement the Mediterranean feel of the menu. Spanning the length of Portugal and Spain with well-placed nods to Italy and France, we kick off with an aperitif of Cava Brut Nature Reserva (€11), one of the top three Cavas in Spain, Somm notes, alongside juicy green olives (nocellara?) and homemade thyme focaccia with decent olive oil for mopping. Although the menu is short, it offers myriad well-priced temptations as well as the dilemma of choosing starters and mains or sticking with an array of small plates. Host’s speciality, handmade pasta and gnocchi, alluring dishes such as Papardelle Duck Ragu, can be ordered either as small plates or mains – ideal for those of us who could never conquer an entire plateful.

Opting for the best of both worlds, we narrowed our choices down to start with sharing plates, kicking off with Fried Squid and Pickled Pimentos (€9). Well cooked without a hint of chewiness and a golden-tinged flavourful batter owing to the addition of turmeric, these were a stellar example of well executed calamari with welcome acidity from the sharp pimentos, although we agreed we would have loved to see tentacles included rather than just rings. A second plate of Burrata & Smoked Aubergine(€9) failed to mention the standout element of the dish – a charred wedge of radicchio, fanned out alongside the unctuous stracciatella. They’ve managed to make lettuce interesting, if not seductive, which is no mean feat – lettuce should never be sexy but this radicchio would have reduced Gwyneth Paltrow to a quivering mess. The sturdy leaves were the perfect scooping vessel for both the Burrata and baba ghanoush. Heightened by toasted sesame seeds and a twist of lemon, this was a very clever dish indeed. Gluttonous but necessary, I couldn’t resist a small serving of seasonal Pumpkin Cappellacci and Sage(€9), a rough approximation of ravioli. A lack of uniformity in shape and size attested to their handmade origins and a tickle of a knife revealed an almost candied sweet centre of roasted pumpkin. With a smattering of toasty walnut, nectar-like browned butter, wood sage and Parmesan this was a solid display of cooking and truthfully, better than any ravioli I indulged in during two recent trips to the Eternal City. After such a feast, I was keen to keep things light with a main of Sea Trout, Lentils and Cavalo Nero (€19) which included a perfectly crisp skinned blushing fillet and flavoursome puy lentils with just enough bite. There may have been a tad too much paprika running through the braising liquor for my liking, but I certainly wasn’t complaining until my dining companion’s main arrived and ultimate food envy took over. What entirely undersold itself on the menu as Pork Chop & Girolles(€19) arrived and effectively stole the show. A behemoth 400g glistened in butter and beared the burnished beauty marks of charring in cast iron. Cooked to melting tenderness, flanked with the kind of sweet rendered fat that you could eat by the bowlful with a simple side of earthy girolles, this was a dish littered with cause for superlatives – toe-curlingly delicious.

Having seen the first pub in Ireland gain a Michelin star earlier this month, isn’t it about time we celebrated the humble beauty of a perfectly cooked pork chop? I can think of few things more pleasing, but I was decidedly less pleased that my share was at the mercy of another. I am quite convinced this is one of the most pleasurable dishes you can get your mouth around in this city for less than €20. Next time, sharing will be out of the question. Less unabashedly carnivorous was another very enjoyable plate in the form of Roast Cauliflower, Pistachio and Yoghurt (€7) topped with pickled red onions, a well thought out veggie side dish I’d happily tip away at as part of a broader feast, and will do on my imminent return. Finally, a Chocolate and Olive Oil Tart(€7) proved to be far more than a nod to Mediterranean flair for the sake of it, with unctuously thick golden oil mirroring the lusciousness of ganache in both mouth-feel and depth of flavour – a happy marriage indeed. A lone black cherry had the difficult task of cutting through such a sumptuous slice, allowing it to remain unashamedly dark and rich – just how I like it. With exceptionally warm service from Chloe herself and a team who are passionate about the dishes they are serving, our bill for three shared starters, two mains, a side, a shared dessert and two glasses of Cava came to €101. I love the fact that you could happily drop by for two generous small plates for less than €20 or go all out for a feast as we did and leave entirely satisfied in both scenarios.

There are rumours that the boom is back, and in the case of fantastic new restaurant openings it certainly is, but at Host the extortionate prices which come with boom-time talk are not on the menu. This is an instant neighbourhood gem anyone and everyone can enjoy, and anyone and everyone I meet is sick of me ranting about *that* pork chop at this stage.

I want to say don’t take my word for it and go see if I’m telling porkies, but I also want to ensure I can get a table whenever the mood takes me, which will be often, as I walk past every day with hungry eyes…a delicious dilemma indeed.