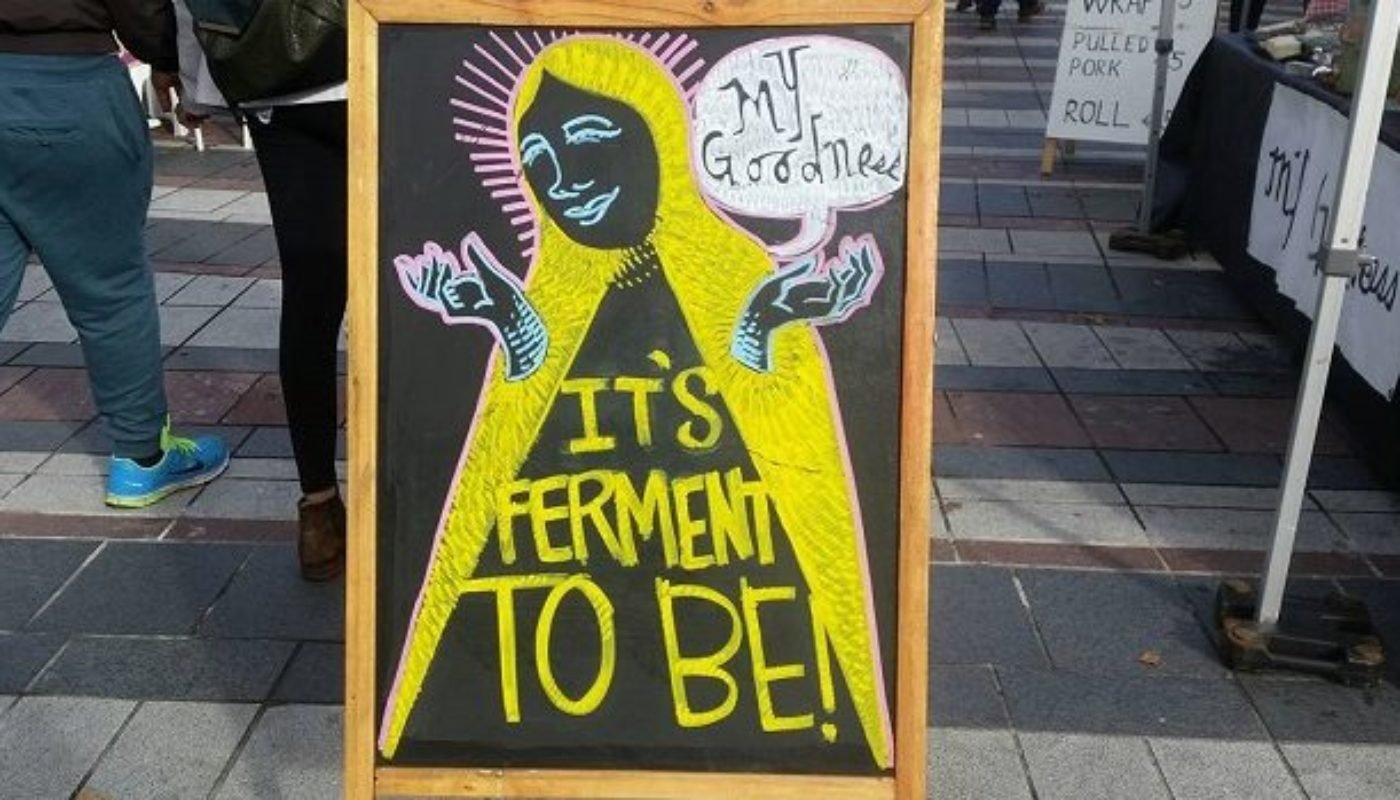 Dining out is a joyful thing. An every day celebration of produce and culinary skill, that can turn a mundane meal time into moreisly magical affair.

I’ve always considered restaurants to be social destinations as much as gastronomic ones, and as restaurant and cafe culture continues to thrive in Ireland, meeting for brunch or a mid-week dinner has become a foodie’s answer to the typical Irish question; ‘pints?’

Thankfully, while dining out before might have been a decadent, expensive luxury now it is something everyone, no matter what the diet or budget, can engage in – after all, it’s no fun being the person who says no to going out for lunch, staying in the office instead to eat last night’s dinner from Tupperware.

We’ve already brought you along on a healthy day-out in Dublin and Kilkenny, and now it’s time to take delicious detour down south to Cork city where a crop of new and exciting ventures has built upon an already solid foundation of food heroes, creating a haven for healthy food lovers.

For breakfast, lunch, dinner and everything in between, read on for our guide to healthy restaurants in Cork where you’re guaranteed to be served delicious food with a smile, and a nutritional punch. Opening its doors officially in January, Good Day Deli is a modern, brightly lit cafe inside the newly renovated Nano Nagle place. Co-owners Kristin Makirere and Claire Condon have lived together in Ireland, New Zealand and the Cook Islands, and so their experience inspires the sustainably driven breakfast, brunch and lunch menus. Think New Zealand inspired dishes with a Cork artisanal accent like Seared Toonsbridge Halloumi with beetroot, mint and leafy greens and seasonal soups with ‘subtle South Pacific flavours.’ Cork’s only all vegan cafe, 143V is open from 8am til 8pm serving an array of vibrant plant based dishes. Along with great coffee (their oat milk flat whites have earned a reputation) they offer anti-inflammatory turmeric lattes and have an extensive juice and smoothie menu overflowing with ingredients like baobab, moringa and acai. Just five minutes walk from Kent train station this is the perfect place to grab a takeaway salad before leaving the Rebel city, or the first place to dash to following a long trip down south. A wholefoods institution in Cork, the Quay Co-op has shifted shape over the years and now the vegetarian restaurant and organic health food store is at its biggest and best, spread out over two buildings. They have shops in Ballincollig and Carrigaline too, but if you’re in the city centre at breakfast time hit up their coffee dock for an almond caramel smoothie and vegan breakfast bap to-go, or take a seat the restaurant to truly take advantage of their legendary hospitality and generous portions. We recommend grabbing a window seat for views of the River Lee. With its royal blue signage, glossy white exterior, and large street facing windows, the Liberty Grill’s New England influence is obvious from the outside. That influence carries through to their all-day brunch menu, served from midday til 5pm. Delicious healthy dishes served at this longstanding Cork favourite include quinoa and sweet potato frit­ters topped with gua­camole, poached eggs and sprin­kled with a hal­loumi crumb, and West Cork free range eggs, poached or scram­bled on sour­dough or rye toast. You can always opt for a side of Rosscarbery Black Pudding too – apparently that’s a ‘superfood’ now… Located just outside the Prince’s Street entrance to the English Market, you can’t help but notice the light blue facade and superhero themed logo of The Rocket Man. Founder Jack Crotty launched The Rocket Man at Cork’s farmers markets, and since has established the salad bar, which offers flavoursome hearty salads and stews, and a second installment EAST, in the iconic Winthrop Arcade, serving freshly made falafel and flatbreads, and great coffee. Fun fact: A Ballymaloe Cookery School alum, Jack graduated in the same class as John Downey of radpidly expanding Thai eatery Ramen, and Jack Kirwan of Dublin’s Sprout & Co. Word on the street is that Crotty has plans to develop a restaurant/venue/hostel on the up-and-coming Barrack’s Street in the near future. Sister restaurant of Elbow Lane, the ever popular Market Lane, and The Castle Cafe, at Blackrock Castle, ORSO brings the fresh and vibrant flavours of the Middle East to Cork. Open from early til late, during the day options include like freshly baked pitta with spicy hummus or a stuffed sweet potato that both come served a choice of two Ottolenghi style salads. Seats are scarce in this small space during the lunch but there’s an option to take your order to go, or order online for collection. If you’re in need of a afternoon pick me up don’t look past their delicious coffee amde with a unique five bean blend, exclusively roasted and combined for them by Greenbean coffee roasters. Cork may not have any Michelin stars, just yet, but chef Jason Carroll has seen his fair share of Michelin starred kitchens, Pierre Kofmann’s 3 Michelin star La Tante Claire for starters. Returning to his hometown he took a more humble, but no less considered, approach to food, starting LovingSalads as a farmers market stall in 2014 and opening his first shop in Cork in September 2015, serving over 28 creative, seasonally changing, and delicious salads made with local produce. Starting as a vegan pop up cafe in Cork city centre in Feburary 2014, My Goodness went on to build a solid following at festivals and markets around the country before finally settling at the iconic English Market last year. There is little chef Virginia O’Gara doesn’t know how to make vegan, often raw and fermented, food incredibly delicious and exceedingly nutritious. From her stall she’ll tempt you to the green side with her lip-smackingly tasty salads, krauts, crackers and raw, sugar-free desserts, and don’t leave without sampling the vast range of sparkling kefir and kombucha made with rain water. Despite being mainly a takeaway with only a handful of sit-in seat available, Cork’s Miyzaki has built a reputation as one of the most authentic Japanese experiences in Ireland. From the tiny kitchenChef patron Takashi Miyzaki churns out a stream of vibrant dishes made with a mix of local and exotic ingredients, including his signature dashi, made from kombu seaweed and bonito flakes which he uses in noodle soups. Catering to demand, in March 2018 Takashi will open Ichigo Ichie, a fine dining Japanese restaurant that will offer a tasting menu of between eight and 12 courses, a mixture of sushi and sashimi created by a chef working at a counter in full view of the diners and hot dishes. ‘How are ya boi?’ is a greeting you’ll often hear on the streets of Cork, in that distinctive sing song accent. While ‘boi’ might be familiar to locals, they might not be as au fait with ‘bao’, the traditional Taiwanese steamed buns. Executive head chef of Greene’s restaurant on MacCurtain Street, Bryan McCarthy, has made it his mission to change that opening a takeaway named Bao Bai last year. Offering Asian-inspired fast, but also fresh, nutritious and local, food, the pillowy soft buns come filled with pulled featherblade beef and Miso Glazed Macroom Wagyu, as well as a market fish special, and a vegan bao created with Ballyhoura Mushroom or crushed avocado. Paradiso (previously known as Cafe Paradiso) may have opened in 1993 but still to this day there is no other vegetarian restaurant like it in Ireland. While the it is solely plant based, proprietor chef Denis Cotter’s vision was not to create a ‘healthy’ restaurant but instead one that elevated the vegetable from a side dish, or from the murky depths of a mish mash soup or stew, to become the centrepiece of a plate. Denis does so using a myriad of techniques to create rich, complex flavours with local vegetables and dairy products, producing as result dishes like king oyster mushrooms and yellow chanterelles, served with grilled leek, pumpkin gnocchi, lemon thyme butter, salted walnuts, and aged coolea. This is vegetarian food at it’s finest. Bear with me on this one… while this BBQ and grill restaurant brought to us by renowned Pitmaster John Relihan, former head chef at Jamie Oliver’s Barbecoa in London, might be best known for the likes of its ‘Dirty Swine’ burger, along with the finest locally sourced meats John cooks butternut squash, aubergines, beetroot, onions, collard greens, and Portobello mushrooms using his signature fire and smoke methods too, and serves a mean Superfood Salad. In an interview with TheTaste John said: “It’s very important to me that everyone, from a vegan up to a meat eater, gets exactly what they need when go into Holy Smoke.” All the traditional Southern-style corn bread is gluten free too. For Indian food unique not alone to Cork but to Ireland, you must visit Iyers, a tiny, family run cafe on Pope’s Quay serving authentic Southern Indian vegetarian food and snacks made fresh daily. Chef Gautham Iyer cooks according to Ayurvedic principles, and the chalkboard menu changes regularly to accommodate the ancient Vedic texts, as well the seasons. The menu often including the fruits of Gautham’s foraging too. The usual suspects at this award winning eatery includes snacks such as pakoras and samosas, a variety of dosas, and more substantial Thali plates, all served with fresh chutneys and delicious lentil sambar. Looking to their homeland for the authentic receipes, owners of ice cream parlour Casanova Gelato churn out Cork’s ‘only real Italian using Irish milk and local fruit, where possible. From their quay side shop they produce over 43 completely natural gelato flavours in rotation, including ranges suitable for vegans, vegetarians and those with a dairy intolerance. We suggest you indulge in a saintly scoop, or three.