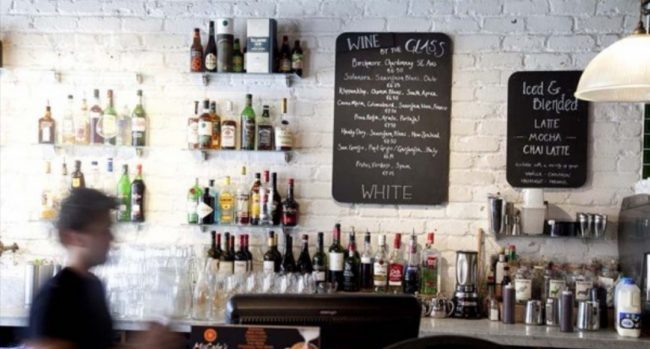 The leafy Dublin suburb of Ranelagh is always one of my favourite places to Brunch at the weekend. With an extensive selection of top class eateries to choose from and quirky shops to navigate post libations, it rarely fails. Traditional brunch hours usually kick off anytime from 10am to 12pm, which can make the wait seem endless for early risers, but Cinnamon, on the main drag in Ranelagh eagerly opens its doors to the hungry public at 9am on weekends and bank holidays, making it one of the few places in Dublin to do so. They serve both a breakfast menu and a brunch menu until 4.30 every weekend, making an entire day’s affair of this Sunday staple.

We arrived just before 11am on a somewhat blustery Bank Holiday Monday and were lucky to snag a seat at the window for optimum people watching. The atmosphere was buzzy without being fraught and it was obvious that Cinnamon is the go to place for families in the area. The brunch menu is relatively varied with plenty of options for all palates, while the breakfast menu offers some lighter dishes and more traditional fare. The cocktail list is short but sweet and the requisite Bloody Mary makes an appearance, along with other classics including a Mimosa, Bellini and Kir Royale all priced at €10 each. Brunch isn’t brunch to me without a fiery Bloody Mary and Cinnamons offering was perfectly adequate to dispel any Monday morning cobwebs. Dishes on the brunch menu are priced from €6 for Soup of the Day to €15.50 for Steak and Eggs.

I opted for their now famous Coronation Chicken Sandwich which is served on multigrain bread with fresh grapes, toasted almonds and rocket salad and priced at €8.50. I had heard a lot about this dish and in many ways, it didn’t disappoint. Mounds of shredded chicken bound in a tangy curried dressing sat atop two sliced of decent multigrain bread, topped with flaked almonds, grapes and dressed rocket. The flavour was good and the portion size was exceedingly generous considering its relatively modest price tag of €8.50. Given the volume, I struggled to finish it. This, of course may well have been compounded by the side order of Truffle Mayo & Parmesan Fries (€5.50) that I insisted on ordering, which resulted in a combination that was a little too mayo heavy. The chips in themselves were very tasty just slightly too rich with the truffle mayo drowning the fries beneath. My dining companion opted for the Beer Battered Fish and Chips which was served with mushy peas and tartare sauce, €14.50. Our expectation of this dish was that the fish would be served as one piece however it arrived to the table as fish goujons. Happily, the fish beneath was very good, with nice chunky flakes encased in the crunchy batter, the obligatory portion of crips chips on the side were demolished. Sides of mushy peas and a tangy tartare sauce completed the plate. Cinnamon has a lovely, laid back weekend vibe with plenty of newspapers on hand and a cake selection at the counter to tempt even the most pious, however we managed to resist on this occasion. There is a decent kids menu available too. We finished our meal with two decent coffees and our bill in total came to €44.90 for two.