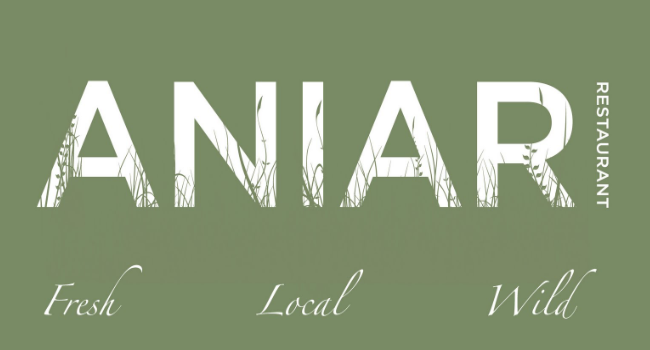 If what you’re looking for is an unpretentious restaurant that serves delicious, locally sourced food, Aniar in Galway City is the place for you.The restaurant is small but in no way claustrophobic with comfortable seating and was buzzing with diners on the Tuesday we dined there despite the inclement weather outside.

The restaurant, under head chef Ultan Cooke has recently changed its menu structure and now offers a range of tasting options leaving the diner with the choice of selecting from 3, 4, 6, 8 or 10 courses from the tasting menu on offer. At first glance, the menu appears minimalist, offering only 12 choices, and between the two of us my friend Eithne and I sampled most of what was on the menu opting for 6 courses at a price of €70 (or €100 with wines specially chosen to complement each course) per person. We eschewed the wine option in favour of a carafe of Chateau Grand Champs Bordeaux.

Breads arrived shortly after we were seated and included a sourdough with little nuggets of a cheddar-like cheese running through it and brown soda bread which we were informed was made with Dungarvan stout. These were served with a generous disc of butter topped with a few flakes of sea salt. One of my pet hates in restaurants is when the bread is whipped away as soon as the first course is finished. Not here! The bread was replenished throughout the meal which was great because they were delicious and we happily nibbled away between courses.

Whilst we perused the menu we were served an amuse bouche duo of kale crisp with an oyster gel and bread crisp with black garlic purée. Both were lovely. To start we chose Swede, Celeriac, Ramson and Fermented Barley, Clams.
It was wonderful to see swede on the menu as this is a vegetable that is often overlooked by restaurant kitchens. Here it was sweet and buttery and along with the celeriac had an earthiness that was accentuated by the gentle garlic note of the ramson. The Fermented Barley and Clams was fresh and light on the palate and tasted of the sea without being overpowering.This dish had a risotto-like presentation, but was more complex in character being at the one time sweet and salty with a very slight sour back note presumably due to the fermentation referred to on the menu. A delightful dish! 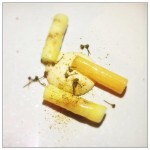 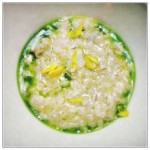 We followed this with Mushroom, Egg and Oxtail, Marrow, Garlic.
The gently sautéed wild mushrooms were served with a water-bath poached egg yolk, which when pierced with a knife oozed out to create a beautiful sauce which complemented the mushrooms perfectly.

Slow-cooked oxtail was served with a sauce made from bone marrow. Words cannot describe how delicious this dish was. The oxtail was rich and meaty but melted in the mouth. The bone marrow sauce was rich and buttery and completely addictive. Textural contrast was provided with what seemed to be a garlicky flavoured crumb to create a dish that was perfect in every way and a wonderful example of how wonderful cheaper cuts of meat can taste. Eithne declared it to be an ‘umami orgasm’!!! Next we sampled one of the most unusual flavoured sorbets I have ever eaten. It looked absolutely fabulous with a simple borage flower setting off the pale pink of the sorbet beautifully. Our friendly waiter informed us that the tea had been specially created for the restaurant to use as the basis for the sorbet. Sorbets, served mid-meal are intended to be palate cleansers and this one did just that. It was floral and fruity but also incredibly refreshing full of the flavours of the wild blueberries and herbs that had been used. We were now ready for our next course Pigeon, Endive, Kohlrabi and Halibut, Seaweed, Herbs

The pigeon dish arrived looking resplendent with feather –like streaks of a sweet tasting carrot puree which really stood out as a colourful statement on the slate on which it was presented. The pigeon was beautifully cooked and beautifully tender. The endive was yielding in texture which suggested that it had been lightly braised but had a slightly charred and caramelised appearance and a gentle bitterness that cut through the sweetness of the other elements of the dish. A kale crisp finished everything off wonderfully.

The halibut was perfectly cooked and seasoned. Its caramelised exterior gave way to sweet, soft flakes of fish that tasted wonderful with the rich buttery sauce that included some well-chosen sea vegetables. 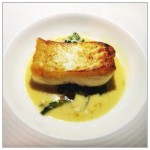 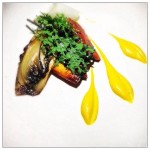 It was now time for dessert Parsnip, Malt, Chicor and Apple, Blackberry, Buttermilk

Our desserts really turned our culinary preconceptions on their heads! Both looked beautiful and were light and sweet and unlike anything we had tasted before. The first of these, a parsnip parfait, was served with chicory meringues and wispy malt flavoured tuile curls. The parfait was velvety in texture with a wonderful natural sweetness that married wonderfully with the crunch of the granola it was served with. Little bursts of intense sweetness were provided by the accompanying carrot gel and by the chicory flavoured meringues.

Apple ‘cloud’ was accompanied by an apple gel, blackberry ‘leather’, blackberry gel, fresh apple and buttermilk served on a sprinkling of hazelnut granola. Everything about this dish was perfect. The apple ‘cloud’ mousse was as light as air but intensely apple flavoured. The different texture of apple and blackberry played tricks with your mind but ended up being completely satisfying.

We finished our meal with a wonderfully light blue cheese mouse served with fresh slices of pear served with a honey gel/syrup and seedy crackers which were beautifully crisp. Blue cheese, pear and honey is one of those classic taste combinations and it worked wonderfully here, each element complementing the other. The saltiness of the blue cheese with the sweetness of the honey and crisp freshness of the pear left us with nothing to complain about. We finished our meal with a wonderfully light blue cheese mouse served with fresh slices of pear served with a honey gel/syrup and seedy crackers which were beautifully crisp. Blue cheese, pear and honey is one of those classic taste combinations and it worked wonderfully here, each element complementing the other. The saltiness of the blue cheese with the sweetness of the honey and crisp freshness of the pear left us with nothing to complain about.

Coffees and petits fours finished everything off beautifully. We left Aniar promising ourselves that we would return soon.

This is a taste experience that is strongly recommended and well worth a visit to the west of Ireland for.
Aniar
53 Lower Dominick Street
Galway.
Tel: 091 535947
http://aniarrestaurant.ie