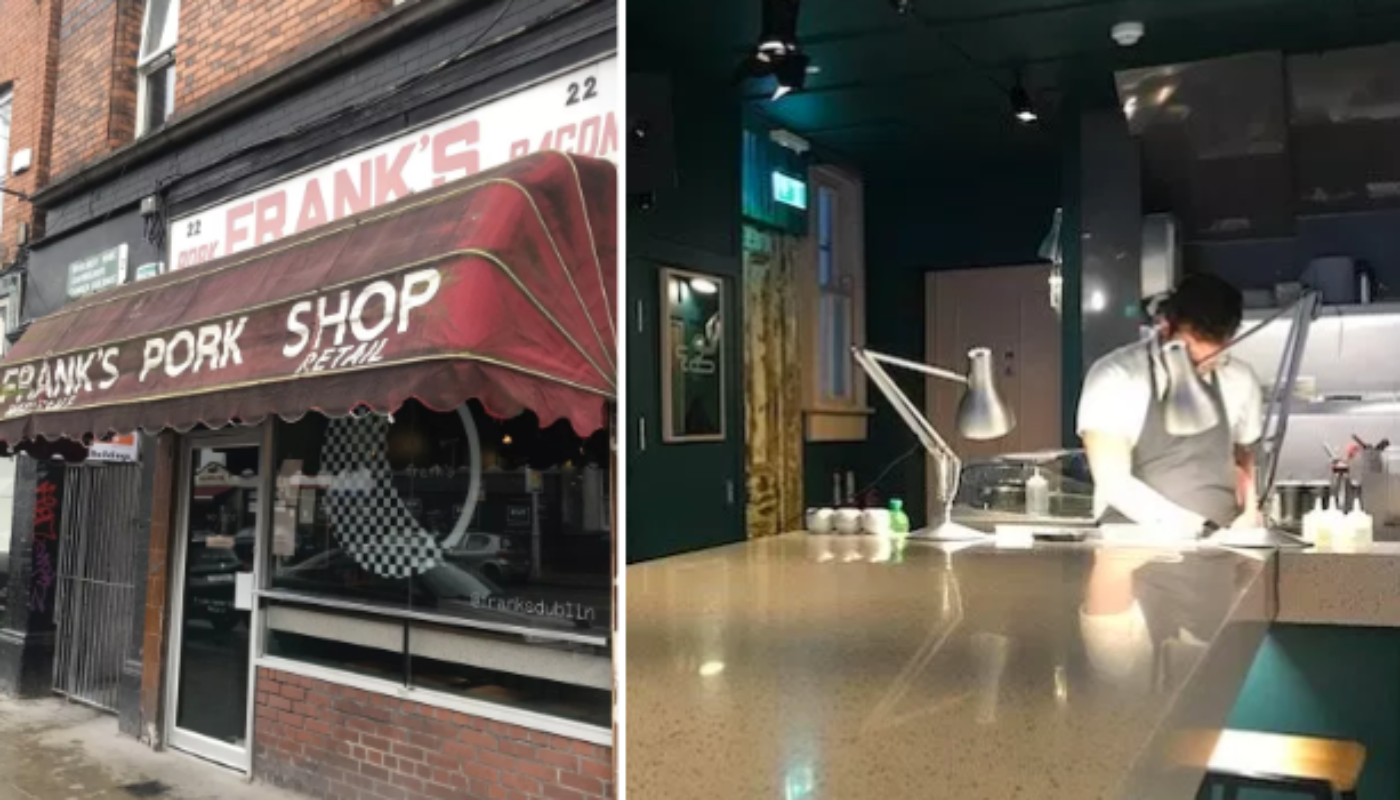 Small plates can be divisive. There are certainly people who would rather eat with their eyes size-wise, but I will never be one of them. Approaching a meal with an inquisitive hovering fork, sampling as many different creations as your heart desires, is my idea of the perfect meal. It is unquestionably better to have three perfect bites than ten mediocre ones. A few doors down, the eatery fit for royalty (The Sussexes, no less) that is Delahunt stands as a proud big sister to Frank’s, the laid back, informal walk-in answer to a Michelin Bib gem which is consistently tough to secure a table in.

The idea of entrusting your weekend dining plans to a roll of dice and going reservations-less can be daunting, but the kind of establishments that can thrive on this model tend to be worth queuing up for.

The communal counter means everyone has the best seat in the house view of chef Chris Maguire at work, solo and serene. You’ll recognize him from Locks, and I’m pleased to say the exceptional skill employed in the Windsor Terrace kitchen has migrated to Camden Street. Joining him is a former Delahunt stalwart Kevin Mogg who welcomes us, the first diners in the door on a dreary Sunday evening.

Mere minutes after arriving, over-eager at 5pm on the dot, we get ur first taste of Maguire’s skills, artful plating, sweet and salty perfection comes in the form of curd, salted cucumber, grilled peach and shards of Serrano (€9). Finished with a Scandi touch of fresh dill, this opening dish had definite Locks vibes in a very good way. Next, a spankingly fresh seabream crudo almost danced off the plate, heightened by the herbaceous astringency of lovage and a broth packing a punch and depth of flavour its translucence would never have suggested. Our third dish read like an umami bomb and over-delivered with oyster mushrooms shaved to mirror slick sheets of pasta, sitting beneath a gushing and rich egg yolk and flavour grenades of shaved anchovy. Terribly clever cooking, explosively delicious in every bite. The scent of onions prickling on the plancha began to fill the air before a beautiful bowl of smokey and chunky Romesco sauce, charred grelot onions and silky smooth gorgonzola arrived, served by Maguire himself. This dish presented the single biggest challenge to my willpower, holding back the desire to devour it long enough to take a photo. “We think it tastes like cheese and onion Tayto” says Kevin as he pours me a glass of mildly fortified Jura which he has has chosen to pair with the dish. He’s not wrong, and maybe it is the culchie in me, but the bowl is scraped clean and I beg him to make sure this dish never leaves the menu. I’m reminded that Grelot onions are only in season for a few weeks so it may soon be gone, and in the knowledge that Maguire has changed the menu every day that week, my heart sinks until the next dish.

For a butcher shop, the menu at Frank’s is scarce on the meat front, with love them or hate them duck hearts taking centre stage as the most carnivorous of offerings. I’m firmly in the love camp and my more sceptical dining companion found herself converted on first bite. A dish which wouldn’t have looked out of place on a tasting menu in starred venue, the tender and deeply delicious duck hearts were flawlessly cooked, atop jammy almost treacley caramelised onion, smokey artichoke hearts and crunchy hazelnut – who needs foie gras?

While it was exceptionally difficult to choose between this and my cheese and onion fix, the grelots may be the best €9 you can spend in Dublin right now. At €15, the duck hearts feel like an absolute steal for a dish so close to perfection.

While on the wine front we stuck quite happily to recommendations from specials which happened to be open on the night (like Burgundian beauty Louis Jadot Bouzeron and a handful of biodynamic sips) we were keen to test out the budget options on offer. An impeccably priced Portuguese red on tap, 2016 Alexandre Relvas Touring Nacionales at €4.50 a glass proved ripe and round and all too drinkable.

Its pocket-friendly white counterpart, 2017 Sicilian Cantine Rallo ‘Ciello Bianco” bordered on too acidic for my taste but certainly could lend itself to a pairing with a rich dish in need of freshness – orange hued from a bit of skin contact and known to come with a bit of scoby – this was cloudy with a chance of a second glass.

A final flourish of a plump wedge of Durrus alongside chunky apricot chutney made for a perfect excuse to linger – two hours had whizzed by in a flash and I was almost ready to order a second grelot onion and gorgonzola by the time we eventually made shapes to leave. The dishes at Frank’s feel like a deconstructed tasting menu – you can go all in or sample a couple with a glass or two of wine, expertly paired. Refreshingly, Kevin never seemed to push the pricier glasses and genuinely took the time to discuss what we both liked to match wines to the dishes and our personal taste. There is serious knowledge made seriously approachable, pretension free and fun-filled – a very difficult balance to achieve.

There is nothing over-complicated and dishes don’t bamboozle the palate – all flavours are in tune and harmonized perfectly. If you’re anything like me, you’ll still be daydreaming about them days later.

I can’t recommend pulling up a stool at this counter enough, although it pains me to think of ever being turned away. Frank’s is destined to be rammed out the door every night as Delahunt has come to be. I guess I’ll see you in the queue.

Our bill, for six dishes with six 125ml glasses of wine came to €118, excluding service.