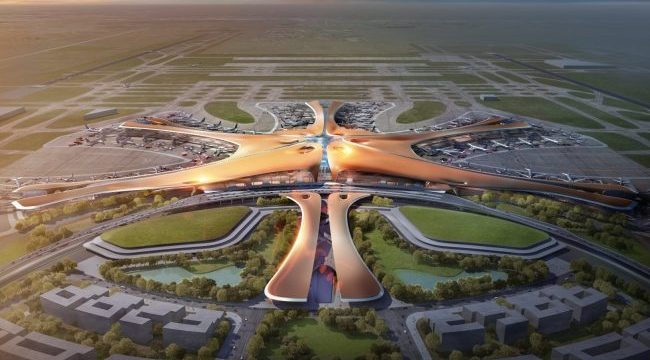 The terminal for the new Beijing Airport, currently known as the Beijing Daxing International Airport, is set to become the world’s largest airport terminal.

The airport, which is located 46 kilometers south of Beijing’s city centre, will relieve pressure from the over-crowded Beijing Capital International Airport.

Designed by celebrated architect, Zaha Hadid, the plans were first unveiled in 2015 before the world-renowned architect passed away in 2016. Her firm have been continuing the work, with the steel rack of the terminal being completed at the end of June.

As construction on the airport continues, airlines including China’s Juneyao Airlines plans to set up a base in the new space.

Zaha Hadid Architects describe the new airport as being “extremely user-focused, efficient and adaptable for future growth; its 6-pier radial design gives exceptional convenience for passengers and flexibility in operations.”

The airport is due to commence operation in 2019 and a visit to Beijing will likely be on the cards for many aviation enthusiasts, just to experience the airport terminal’s majestic size.