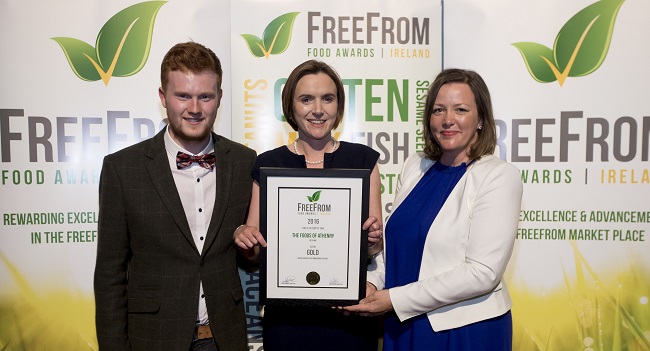 Already an established event in the UK, the FreeFrom Food Awards have come to Ireland with the first winners announced at a black tie gala last week. The awards are highly significant for Irish producers as the recognition can lead to wider distribution and brand awareness.

The awards, which took place in the Round Room at the Mansion House, recognise free from products across 40 categories, culminating in the coveted Product of the Year award.

The inaugural winner was Rule of Crumb for their Gluten Free Salted Caramel and Chocolate Profiteroles. The Innovation Gold Award went to Foods of Athenry for their ‘Bite’ box. Product Range of the Year was awarded to BFree Foods for their efforts in developing their free from range.

The awards were presented by founder John Burke, an Irish businessman and coeliac, who has been involved in the FreeFrom world and the Irish Quality Food Awards for a number of years and brought the awards to Ireland. He was joined on the judging panel by Maria McHale, Editor of Slainte Magazine, who is also a coeliac.

Over 150 members of the FreeFrom industry including retailers and producers assembled on Thursday 9th of June to witness Irish companies sweep the board, taking most of the awards on the night.

The Special Services to the Industry award, sponsored by Juvela, was presented to the founder of the UK FreeFrom Food Awards Michelle Berriedale-Johnston in recognition of her contribution to the FreeFrom world. This is a unique accolade which recognises Michelle’s involvement in food sensitivity for nearly 30 years.

For a full list of winners and more information about the awards visit www.fffa.ie.