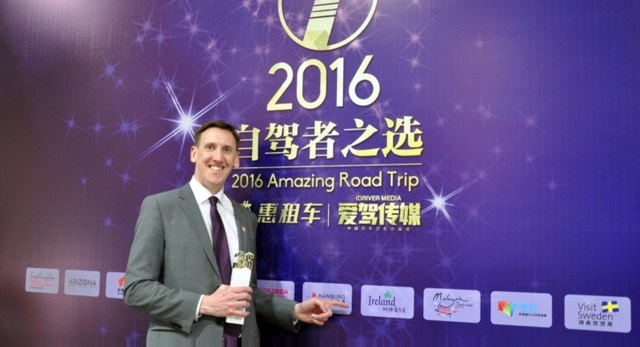 The Wild Atlantic Way has won ‘Best International Self-Drive Route’ at an awards ceremony in Shanghai this week.

The award ceremony was organised by a car rental portal called, HuiZuChe. It is one of the top travel companies in China offering self-drive holidays.

The winning routes were chosen by about 10 million Chinese travellers, who voted through an online system. Wild Atlantic way snapped up the prize in their category. Other impressive nominees in the category were other driving routes in Sweden, Malaysia, Tasmania, California and Florida.

Accepting the award, James Kenny, Tourism Ireland’s Manager China, said: “We are delighted that the Wild Atlantic Way has been named a ‘Best International Self-Drive Route’ in the important HuiZuChe awards. Chinese travellers have so much choice nowadays, which makes it more important than ever for us to ensure that the island of Ireland really stands out from other destinations – so this award is really good news as we roll out our busy promotional drive for 2017. This accolade will help to inspire Chinese holidaymakers to choose the Wild Atlantic Way and the island of Ireland; it also provides Tourism Ireland with another great hook to continue to promote Ireland as a ‘must see’ destination in 2017.”

Tourism Ireland works closely with Chinese travel and lifestyle journalists and has offices in Shanghai, Beijing, Guangzhou and Chengdu.