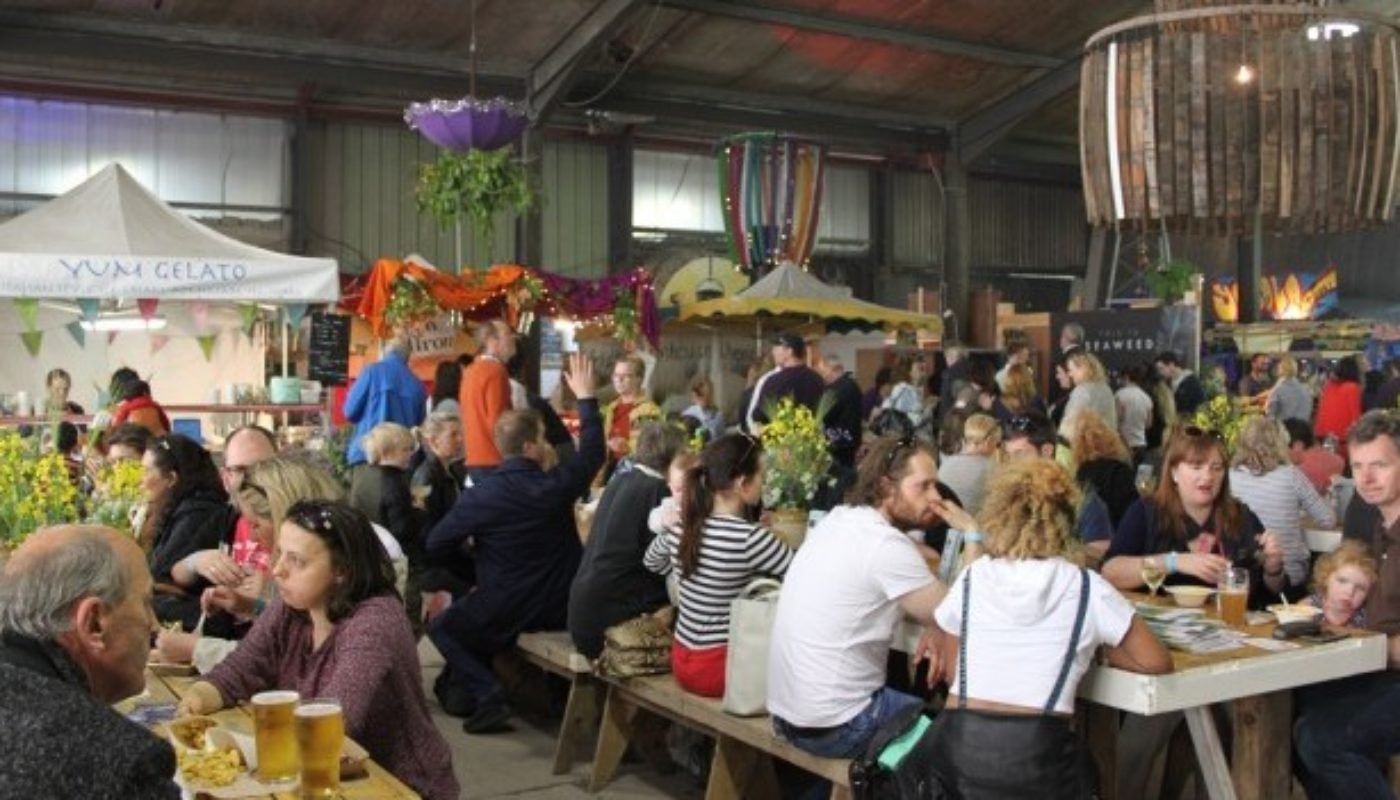 Going for a walk along the quiet country roads of East Cork with two of the most celebrated and innovative chefs in San Francisco is not usually how I spend my Sunday mornings, but this was no ordinary Sunday, this was day three of Ballymaloe LitFest – which for four years has attracted the rockstars of the culinary world, and where there is no VIP area.

Foraging with Nick Balla and Cortney Burns of San Fran’s renowned Bar Tartine restaurant was indeed highlight of this year’s Kerrygold Ballymaloe Literary Festival of Food & Wine. But so too was queuing up for falafel with chef and food writer Yotam Ottolenghi, and soaking up the sunshine while sharing a bench with Janis Robinson, hailed as ‘the most respected wine critic and journalist in the world’.

The only festival of its kind in Ireland, LitFest has built a reputation for its refreshingly inclusive approach, and has become a hub where food and drinks enthusiasts from all over the world come to meet, share ideas, and take part in a celebration of food and drink writing.

What draws the crowds to Ballymaloe each year is how LitFest takes the stories, recipes and voices from the best cookbooks and publications worldwide, and brings them to life through a series of inspiring, engaging, and sometimes even brilliantly bizarre, talks, workshops and demos.

One of the stand out events at LitFest 2016, actually began at 3am on Saturday, the time renowned Argentine chef Francis Mallmann lit his open fire in the gardens of Ballymaloe Cookery School for his sold out ‘Cooking with Fire’ demonstration. Barely leaving the side of his precious fire until his demo later that afternoon, Mallmann showcased how his fire and earth cooking methods can elevate rustic fire cooked fare to dishes worthy of a gourmet restaurant. And while the rest of the country was washed away, the weather gods looked favourably on the foodies in Ballymaloe, who couldn’t have asked for better weather for a BBQ feast.

Introduced by Darina Allen as ‘The King and Queen of Funky Fermentation’, Nick and Cortney of Bar Tartine kept a packed room spell-bounded with their food wizardry. Using their signature preservation techniques, unusual ingredients, and globally inspired palates, they created dishes like Hungarian Fisherman’s Stew, Sprouted Lentil Crouquettes doused in kefir and watercress sauces, and Smoked Potatoes with black garlic, finished off with ramp mayonnaise, made from a prized batch of fermented ramps, wild garlic to us, that they had brought with them from their Mission Area restaurant.

While the cookery demonstrations were some of the most highly anticipated events of the weekend, Mallmann, the visiting chefs took to the stage in The Grainstore too, along with a dynamic pool of writers and experts, in a series of TED-style talks that ran throughout the weekend. The Grainstore was transformed into a symposium, where speakers and audience members alike shared their food experiences in a bid to best answer the question, and theme of the festival, “Our food – what’s the story?”

Katie Sanderson, another sell out demo chef, and her partner, fellow chef Jasper O’Connor, told the story of The Dillisk Project; their pop-up restaurant on ‘the Edge of the World’, also known as a derelict boat shed on the shorelines of Connemara. An impassioned talk called ‘Food in a Warzone’ by Kamal Mouzawak, food writer and founder of the Lebanon’s first open air farmer’s, provoked a member of the audience to declare that Kamal had changed the way she saw food. Though it was UCC Professor Ted Dinan who became the unexpected star of LitFest with his enlightening talk on how our gut is deeply connected to our mental health.

At one stage the number one trend on Twitter, The Drinks Theatre was the place to be at LitFest 2016. Among the sold out talks come tastings was ‘The World’s Under-priced Wines’ with Janis Robinson, and cocktails were demystified by award-winning mixologist Nick Strangeway and Oisin Davis, one of Ireland’s best-known names in the world of cocktails, who ‘foraged’ ingredients from The Big Shed’ and made cocktails with household blenders, soup guns, baking sieves, and Kilner jars.

If you were lucky enough to nab a ticket, some of the best restaurants, in Ireland and abroad, popped up at Ballymaloe over the weekend, including the River Cafe, with head chef Joseph Tivelli, MEWS restaurant of Baltimore, and NOPI, with Yotam Ottolenghi and Ramael Scully. Visiting Ballymaloe for the third time, at the NOPI demo the next day Ottolenghi was keen to deflect the praise for the Middle Eastern feast he had helped create to head chef Scully: “he does the cooking, I just hand him things”.

While many of the ticketed events sold out weeks in advance, with tickets at just €5 and kids going free, the LitFest Fringe Festival meant that as many as 8,000 visitors in total could get involved in the celebratory atmosphere. Foodies, families and general fun seekers were encouraged to go ‘free range’, as Rory O’Connell puts it, around the grounds of Ballymaloe House and farm, and take part in the Fringe events and activities.

Still very much a working farm, many of the outbuildings are absorbed by the festival, and transformed into venues. Used to store bales of hay and farm machinery during the year, The Big Shed has become the beating heart of LitFest, drawing crowds in with its mouth-watering selection food and drinks from Irish artisan producers, dynamic demos, and live music. Dishes of the weekend included The Rocket Man falafel, Diva Boutique Bakery lemon meringue pies, goat tacos from Broughgammon Farm and a festival special of john dory & salmon mouclade curry from Green Saffron.

Just outside the doors of The Big Shed, through a smoky haze, a constant line of people could be seen waiting for the ‘Meat Fest’ platters offered up by Fingal Ferguson of Gubbeen Farm, while others opted for the thin crust pizzas, with bubbling mozzarella, straight from the ovens of Volcano Wood-fired Pizza.

With a ‘golden’ reputation here and abroad, Kerrygold fans were lured to the artfully styled Kerrygold Korner, where, amongst other butter based activities, cooks Imen McDonnell and Sophie Morris melted, scooped and spread the delicious dairy product during numerous demos, and a unique Butter Boogie Brunch took place, with attendees encourage to shake jars of buttermilk to create their own butter.

Rather than cover its rustic ceiling, eyes were drawn upwards by the quirky installations created by Dublin based creative collective Queens of Neon. Pimped up watering cans, branches weaved into giant nests, and fish bowls, goldfish included, brought the rustic surroundings of The Big Shed to life. Though little encouragement for fun and frivolity is needed at The Big Shed, where the now legendary LitFest night-time parties go on into early hours of the morning.

Though those looking for some daytime, feisty fun found home in The Garden Tent, where they could get it all off their chest at the soapbox style ‘Rants, Raves and Ruaille Buaille’, or join in the ‘Banter’ talk series, such as ‘So you want to open your own restaurant …’, with chef Jess Murphy of Kai, Galway, and ‘rockstar’ restaurateur John Farrell.

Of course, with Ballymaloe comes the Allen family, and they truly are the life blood of LitFest. There wasn’t a talk in The Grainstore that Rory O’Connell didn’t pose a perfectly perceptive question, and down in the Cookery School Rachel and Darina Allen got hands on at chef demos, and bantered with the visiting chefs; many of whom they already had long-standing relationships with.

The matriarch of the Allen family, Myrtle, now in her 90s, still resides in Ballymaloe House, and her 22 grandchildren and 28 grandchildren are embedded in the festival – indeed other family foodie businesses, the Ballymaloe Shop & Cafe and Cully & Sully, are festival sponsors.

The aim of LitFest 2016 was focus our minds and thoughts on the question “Our food – what’s the story?”. After a weekend of fascinating talks, some funky fermentation and a touch of fire, I don’t know if we are any closer to answering that question. Though I can say that our food story is by no means a book, committed to print, nor a collection of short stories, or even a frequently published periodical. Our food story is a constantly evolving and expanding dialogue, best shared face to face, and I look forward to continuing that conversation at LitFest 2017.