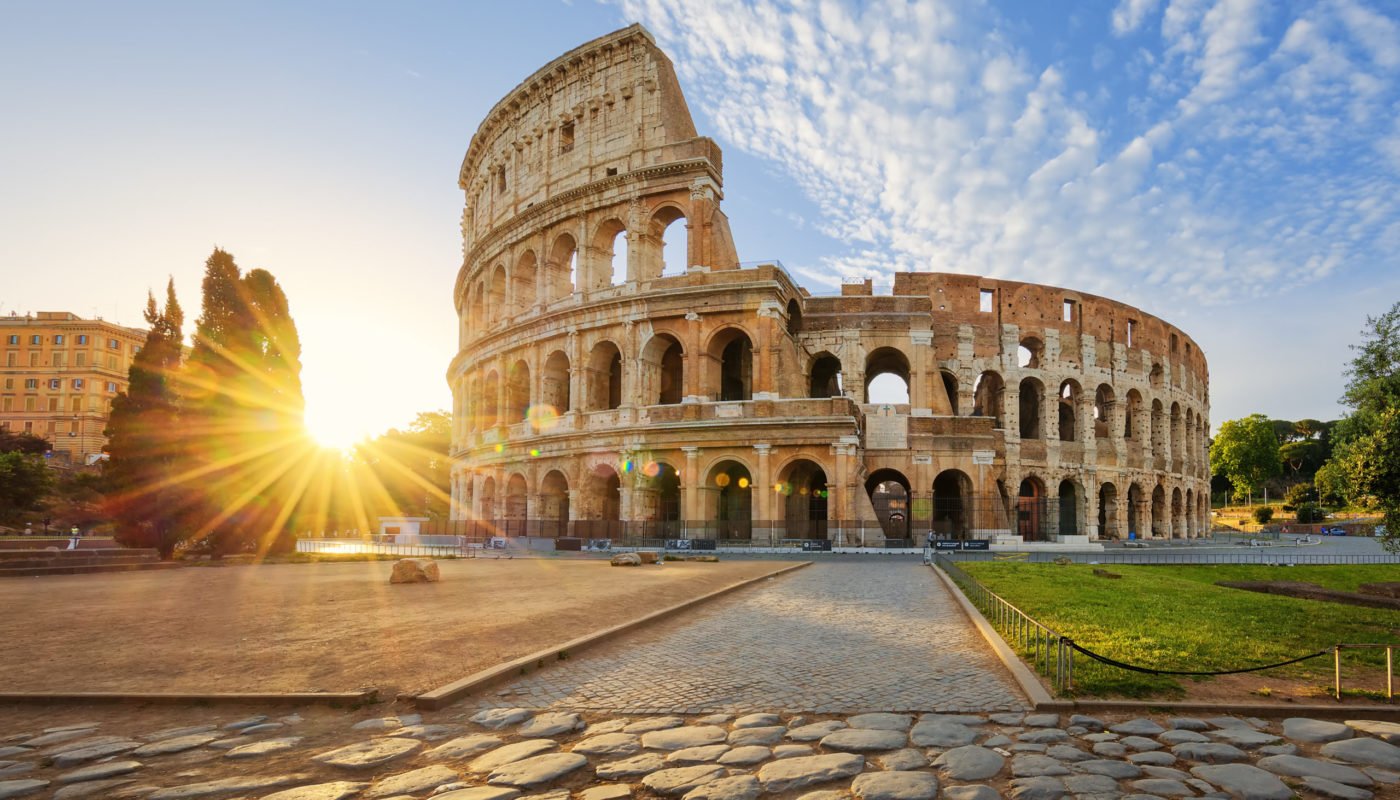 Home » When in Rome with Eric Matthews

What can I say about Rome that hasn’t already been said? I was first in the “Eternal City” when I was 13 with my mother. She, an avid traveller and food fanatic, (I didn’t lick it off a stone) was in love with this city. I was initially supposed to go on a school trip but wasn’t able to, so my mother instead brought me on a whirlwind trip around the city for 4 days… I was hooked.

Rome is literally a living museum from the Colosseum to the Pantheon, and well pretty much every square inch of this majestic city. I have returned numerous times, on an interrailing trip in my late teens and a few city breaks in between long weeks of cheffing.

Rome is a city that has a ferocious appetite for fun and indulgence going back as far as Romulus and Remus. Every time I come to Rome I have a plan, however within about 15 minutes my plans usually shift to something else food related.

This is not a guide of all the best restaurants and bars in Rome! This, ladies and gentlemen, is a list of my favourite restaurants and some damn good bars I have enjoyed over the years of travelling to this city. If you want the best list of restaurants and bars just head over to Google. These are my experiences when in Rome and I’ll be honest… they were pretty good.

When in Rome with Eric Matthews – Food

Let’s start with restaurants, and don’t worry, I’m not going to overload the system.

I was first put on to this place by a chef who worked with me. Situated at Piazza Tarquinia, chef Sarah Cicolini’s simple tiled decor and casual service immediately puts you in a happy place. The trifecta of Roman classics are the must have here. Cacio e Pepe, carbonara (my favourite in Rome) and the Amatriciana alongside some more hearty offal dishes…don’t miss the chicken liver and giblet omelette.

Ok yes this place is a bit of a tourist trap but when it comes to a great Roman experience, this place delivers. Fantastic cured meats and pasta. The atmosphere is buzzy and just right for a quick detour on the way to the Trevi fountain. Ragu di Cortile is phenomenal if you fancy something different, a deep rich ragu with a wee bit of foie gras for good measure.

I was brought here by my Mrs Ciara after an eventful trip to the Colosseum. I must admit, the idea of a restaurant so close to a major tourist attraction anywhere in the world would instill fear in any chef. The mere mention of a restaurant with such a long name in this vicinity made me want to jump in the Tibre. However I was wrong.

This was one of the most enjoyable meals I had in Rome. A pure example of the trattoria. Family at the heart, both with the clients and the atmosphere. For being so close to one of the most famous landmarks in the world, we were probably the only tourists in this buzzy restaurant. Black truffle Cacio e Pepe and fantastic “Roman roast pork” were both incredible. Please go here and thank me later.

This is a posh place, I’m gonna put that out there. It is not Michelin posh but it has an old world grace to it. It feels like Peter Luger in New York or Le Procope in Paris. You feel special but not like you need to be thankful and appreciative of being allowed in the door. I ate some fantastic prawn linguine and a superb grilled dover sole here, done table side. The wine list is extensive. This place is not cheap so go big or go home here…I joke! I like eating outside on the terrace, a simple seafood pasta and a glass of Pinot Grigio, now that won’t break the bank.

This is 3 star Michelin stuff.  That means not cheap but! If you fancy a meal that makes you feel that level of special only world leaders and celebrities feel then go for it. Personally give me a big dirty porchetta sandwich any day. Speaking of…

Pane e Salame has hands down the best sandwiches in Rome in my opinion. Cheese and meat boards are also a must here but the porchetta was superb.

When in Rome with Eric Matthews – Drinks

When it comes to alcohol and bars in Rome, the Romans are masters of hospitality and style. Cocktail bars and small tavernas are so well stocked with the finest drinks it is very hard to go wrong. Here’s a list of just a few of my favourite places to wet the whistle.

The Court at the Hotel Palazzo Manfredi

Myself and the Mrs were staying in the sister hotel to this beautiful, high spec boutique hotel. We were recommended to have a cocktail here before we left but I highly doubt Marcus Aurelius would have imagined such a bar with a view so close to the Colosseum.  It’s not exactly cheap but if you want imaginative cocktails and the originals with a twist or just the originals, this is the place. You can’t beat a Negroni at sunset here to get you in the mood.

Ranked number 19 in the World’s Best Cocktail Bars in 2021. This is the first venture by Patrick Pistolesi (he’s basically the best cocktail guy in Rome). This place has mind-blowing decor and even more mind-blowing cocktails. I’m not a big fan of cocktail worshipping bars if I’m honest. I love the classics but this place is an experience. You won’t be disappointed.

This is not some fancy pants cocktail bar. This is where we all feel familiar, a dive bar. A bar where you feel comfortable. A bar where you stand on the street and talk nonsense to the ones you love and the ones you just met. Hands down my favourite watering hole in Rome. It gets a bit busy on the weekend but in the summer it’s fantastic to stand on the street here and shoot the breeze.

Rome is a place that excites us all, food and pleasure have always been at the heart and sole of the city. So my advice is to book a flight and dig in…”when in Rome’.

This is hands down the most famous dish in Rome. Every restaurant has a version. To be honest you can’t go very wrong anywhere really but my favourite has to be at Santo Palato.

– Firstly place a large pot of water on to boil. Season the water lightly with salt. Olive oil is optional but not necessary.

– Slice the guanciale into nice chunky lardons. Add these to a cold dry pan and slowly render out the fat to become crisp. Remove half of the crispy lardons for later for the top of the finished dish.

– Cook the rigatoni in the pot of boiling water for approx 8 min or until al dente.

– Next in a large bowl add the egg yolks to the pecorino and whisk to form a paste. Add a good few twists of pepper and  2 small ladles of the pasta cooking water. You will now have a cheesy custard.

– You’re nearly there, add the pasta to the pan with the remaining guanciale and remove immediately from the heat.

– Add the cheese mix and move the pan vigorously to create a thick rich sauce.

– I added loads of extra crumbly pecorino as I went. What I remember from Santo Palato was the amount of cheese in all of the classic Roman pasta dishes. So “when in Rome”…

– Serve onto a bowl or plate, whatever you have really.

– Scatter with the remaining guanciale and more pecorino.

Article: When in Rome by Eric Matthews

For the last 6 years Eric Matthews was the head chef at Dublin’s famous Michelin starred Chapter One. Eric has over 18 years experience working in Michelin starred restaurants around the globe, having trained under some of the best chefs in Ireland and internationally, including Heston Blumenthal, Philip Howard and Guillame Brahimi. This year Eric was named in The Independent’s annual Top 50 People to Watch in 2022. Eric is also a food content creator and a regular at Taste of Dublin. More recently Eric was a judge on the RTE series ‘Battle of the Food Trucks’.