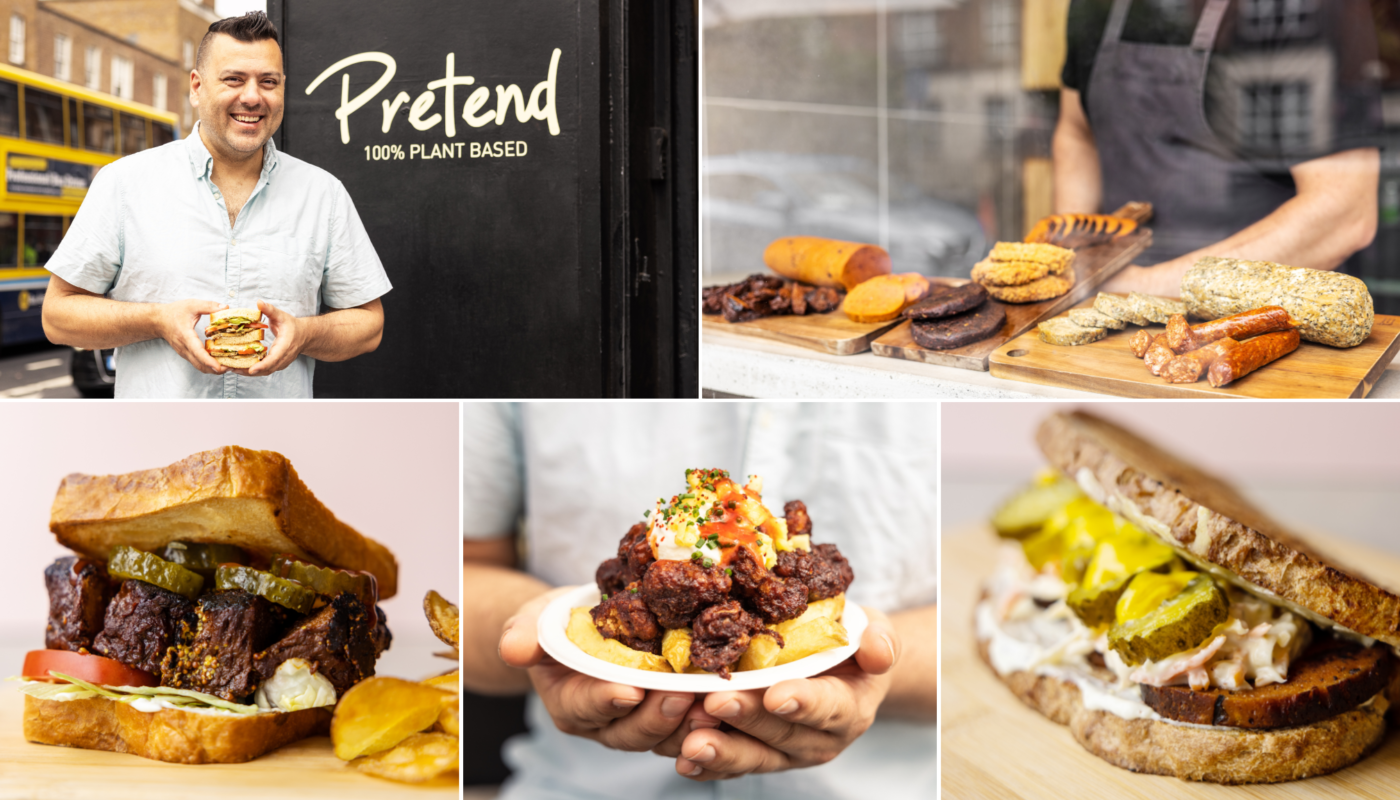 Having carried out extensive research into what food products tick the boxes for ‘omnivore’ consumers – whose diets contain both meat and vegan items – Senn has come to the understanding that they are more likely to connect with a plant-based meat alternative rather than vegan foods that are unfamiliar to them.

Pretend, which makes it easy and affordable to be kind to yourself and the planet, has opened on the site of their former vegan takeaway venue, Vish.Shop, in Dublin 7. From here, the delicatessen offers 100% plant-based meat alternatives that can be enjoyed in a variety of grab and go takeaway dishes – including sumptuous signature and custom-made Sandwiches, Cauliflower Wings, Burgers, Vish™ & Chips, Loaded Triple Cooked Chips, Salads, and classic Cheesecake desserts – and vegan items that can be enjoyed as part of a home-cooked meal.

Fans of the former Vish.Shop will be happy to hear that the takeaway’s famous Cauliflower Wings & Chips remain with three different combos on the new Pretend menu; Original BBQ, Tandoori Masala, and Sticky Honey, Ginger & Sesame.

Mouth-watering Cheese, Classic, and Tofu ‘Bacon’ Burgers can all be customised with your favourite Pretend ‘meat’ – the signature Veginity Patty, ‘Chorizo’, Chick’arnt, ‘Steak Medallion’, and ‘Ham Steak’ – and are listed alongside flavoursome Original Vish™ and Smokey Vish™ Burgers.

Even lovers of the traditional chipper are catered for with crispy battered Original Vish™ & Chips, and Smokey Vish™ & Chips – made from Cassava and hand harvested Seaweed, battered and cooked to perfection, topped with homemade Kimchi, Tartar Sauce and Triple Cooked Chips – keeping the locals’ insatiable appetite for deep-fried delights satisfied.

Omnivores of the sweet-toothed variety won’t be left wanting either with a host of decadent desserts on offer. Classics like Strawberry, Black Forest, and Guinness Baileys Cheesecakes alongside Biscoff Dulce de Leche and Blueberry Ginger Nut flavoured versions, plus Double Chocolate Brownies and their famous Cake-Cups and their vegan Ice Creams – the perfect way to round off a plant-based feast!

As well as being a 100% plant-based fresh foods deli, Pretend also offers an old school butchery service, where you can buy items fresh from the counter by weight and cut. Customers can come in and purchase handmade Pretend ‘meats’ and other plant–based products such as condiments to experiment with in their home cooking. You will be able to choose the type of Pretend ‘meat’ you’d like and specify exactly how you would like it to be sliced, and have it neatly packaged up for you to take home and enjoy in your own culinary creations.

Experimentation with lots of different vegetables went in the pursuit of creating Pretend ‘Bacon’; aubergine, banana skins, starches, daikon, and mushrooms to name but a few. Tofu was the outright winner as it delivered the most consistent flavour. Smoking tofu themselves allows Pretend to control the intensity level of flavour in the ‘bacon’. A very versatile product, it goes extremely well on burgers or served as part of vegan Irish breakfasts, and Pretend have even used it in items such as Tofu ‘Bacon’ Jam and in a vegan carbonara sauce.

Pretend ‘Ham’ is an item that has been specially developed with the Christmas season in mind. With lots of people wanting to have a traditional look and feel to their vegan Christmas dinners, the brand’s 100% plant-based ham has been created in a way that means that it can either be left whole and roasted at home, thick cut, like Canadian bacon, or thin cut like deli ham. When glazed with Pretend Char-Siu Glaze and roasted whole, it rivals any traditional Christmas Day meal centrepiece.

A plant-based alternative to turkey is something that Senn and his team get asked about the most. Growing up, one thing he enjoyed most about Christmas was the stuffing, so his Pretend ‘Turkey’ contains all the elements of a great turkey meat plus the flavourful stuffing, all in one bite. Great roasted whole and just like the traditional meat does, sliced into rounds, it makes for the perfect sandwich filling.

The super star of the range in his opinion, Senn believes Pretend ‘Steak’ is strong enough to make it into retail sections of leading supermarkets along with the foodservice industry. It’s available in individual medallions for customers to cook whole as beef steak substitutes, or cut into strips to be stir-fried.

Pretend Chick’arnt patties – a juicy seitan and soy fillet in a Kentucky-style panko crumb coating – is an ideal plant-based meat alternative for use in burgers, wraps, or salads – can be purchased as individual portions to be cooked as you please. The patties are perfect for oven baking, pan frying or deep frying, and can also be placed into an air-fryer to achieve the desired result.

The Veginity Burger patty is the first vegan ‘meat’ that Senn and his team ever developed. They approached creating their vegan burger from the angle of understanding exactly what cows themselves eat and how that contributes to the flavour of their meat. In creating the Veginity Burger, Mark wanted to achieve deeper intense flavours, not normally associated with veggie burgers. He and his team utilise items such as wheat grass, spirulina and fermented beetroot to replicate this. The wheat grass introduces lots of iron, the spirulina adds a funky note and the fermented beet not only adds colour but also a tang that balances the other flavours out.

For their Pretend ‘Chorizo’, the delicatessen uses traditional chorizo herbs and spices to give it the same familiar delicious smoky and spicy flavour that you can taste in the traditional version. Pretend uses chunky soy and seitan in their chorizo mix so that their 100% plant-based product has the same amazing bite and mouth feel as you get with a pork filling. This is then placed into a vegan casing to ensure that all of the flavour is kept inside during cooking and also gives it a fantastic caramelisation on the outer skin, the same as a meat-based chorizo would do. Its various different uses include chopping it into chunks and pan-frying it to be added to a vegan scrambled tofu brunch, and it can also be very thinly sliced and used as an incredibly flavoursome pizza topping.

Pretend ‘Pastrami’ is an extension of the brand’s Pretend ‘Ham’. The delicatessen slowly grills theirs so that it gets a deep caramelisation on the outside, which increases the smokiness and firms up the texture of the Pastrami to create the perfect amount of meatiness for its signature Reuben Sandwich – delivering that authentic NYC deli experience to Dublin’s diners.

Pretend will be popping up at Veginity on the last Sunday of every month. These Pop-ups will showcase the versatility of Pretend meat alternatives as part of delicious family-style meals with all the trimmings. In line with Veginity’s world-inspired approach to plant-based cuisine, the Pretend Pop-up menus will be ever-changing, focusing on a different country each month.

Each Sunday Pop-up will be a ticketed event, priced at €25.00 per person for a two-course meal consisting of a family-style dinner and a decadent dessert. The first ever Pretend Pop-up will be held on Sunday 28th August, for which the theme is going to be ‘Deep South BBQ’. Tickets are available in limited numbers so you are encouraged to book early via the ‘Reservations’ page on Veginity’s website, www.veginity.com, and selecting your preferred date.

The new opening on Blessington Street will also act as the flagship store for the Pretend brand, showcasing the new restaurant wholesale arm to its business. As well as connecting with omnivore consumers, Pretend will also specialise in providing a plant-based solution for Dublin’s food service sector (there are plans for nationwide expansion later down the line).

Following the rise in eateries in Ireland wanting to offer quality vegan food to their customers, Senn and Baceviciute have identified a gap in the market for relieving other food business owners of the logistical headaches around sourcing niche ingredients and cooking vegan meals. Pretend provides them with an easily accessible one-stop shop for all of their plant-based meal requirements. From pizza shops looking for cheese alternatives and plant-based meat toppings, to bistros looking to increase their vegan offerings beyond the boring burgers and salads, Pretend’s new wholesale range makes doing so a lot simpler.

Commenting on the opening of Pretend, Owner & Chef, Mark Senn said: “It’s taken years of hard work, research, and testing, and we’re really proud of what our little food truck has become. It’s crazy to think that only a handful of years ago you couldn’t really get a good Veggie choice anywhere, and now with Pretend we’re able to offer a complete one-stop shop, where our customers are spoilt for choice.”

Australian born vegan chef, Mark Senn, studied Hospitality Management at RMIT University in his native Melbourne. At the age of 21 his fascination with being in the kitchen and the idea of a career in cheffing took root and is around the same time that Mark became vegetarian, which he has been for the past 26 years.

There wasn’t a vast amount of knowledge on the subject back then so Mark set out trying to teach himself what he could eat following a vegetarian diet. He began working at Vegetarian Orgasm in Melbourne – the first vegan restaurant that he worked for – where he was responsible for crafting amazing plant-based desserts. Mark’s next move took him to London, where he worked as a Chef at the famous plant-based restaurant, Mildred’s, in Soho. In 2007 he moved back to Melbourne and headed up the Kitchen at Soul Mama for four years before relocating to Ireland in 2012.

Ingrida and Mark set up Veginity in 2016 – firstly as a vegan food truck operating from Richmond Place, and then a bricks and mortar restaurant at 101 Dorset Street in 2018 offering world-inspired plant-based cuisine where street food meets fine dining.

Vish.Shop, serving Vish™ & Chips was opened in Eatyard in their second food truck in 2016 and then opened in permanent premises on Blessington Street in November 2018, which has now evolved into Pretend.

With the library of knowledge and expertise that he has built up in this area since launching Veginity in 2016, Australian-born Senn is now recognised at being at the cutting edge of the vegan food scene in Dublin.

Over the last six years he has tirelessly developed an entire range of alternative plant-based meats that are available from Pretend’s new premises on Blessington Street in delicious ready-to-eat takeaway dishes or as individual cook-at-home items. These include the likes of Pretend ‘Bacon’, ‘Ham’, ‘Turkey’, ‘Steak’, and Chick’arnt, as well as the Veginity Burger and Vish™.