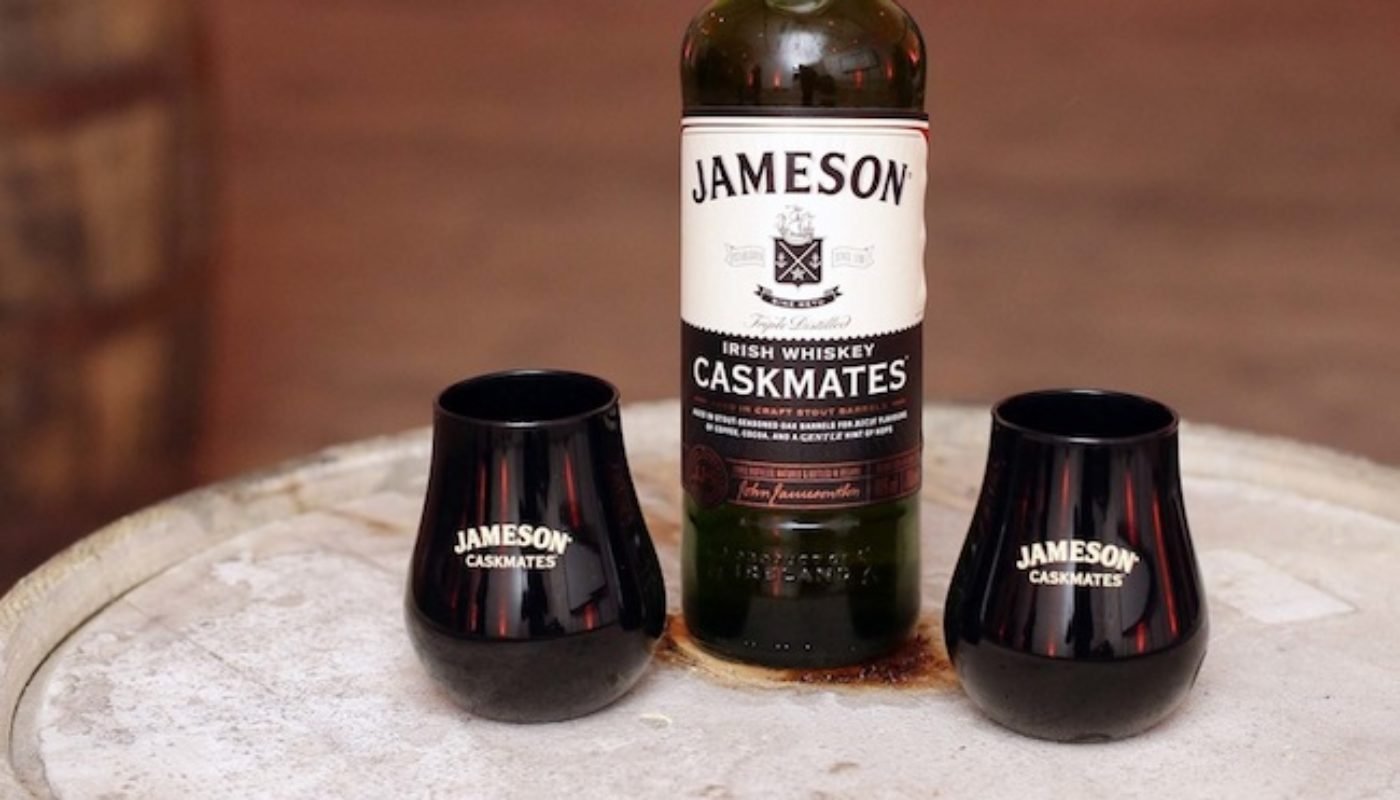 Jameson and craft Irish stout are no strangers behind the bar, but for the first time ever they’ve swapped casks to create Jameson Caskmates, created exclusively by the Midleton Distillery in collaboration with the Franciscan Well Brewery in Cork.

A truly great whiskey celebrating the great things that can happen when two great things cross paths. This special whiskey takes the name Caskmates because stout and whiskey have both spent time in each other’s casks and just 3,500 bottles have been created.

Last year Jameson gave some of their whiskey barrels to the Franciscan Well Brewery, who used them to age their craft stout. Once the stout had been bottled, the seasoned barrels were returned and used to finish Jameson Original whiskey.

The time spent in the stout-seasoned barrels delivers unique notes of coffee, cocoa and hops to Jameson Caskmates while still retaining all the triple distilled smoothness of Jameson Original. This whiskey will appeal to both whiskey and stout lovers who appreciate bold and memorable flavours. It is great to see this collaboration as Franciscan Well brewery founder Shane Long,defying Legend that the water from the well has miraculous and curative powers “that no doubt, the monks glugged down for medicinal purposes as they were the masters distillers of their time”, encourages and nurtures his brewer’s creativity and skills, by challenging them to come up with a unique range of seasonal brews. It paid off in 2014 with Padraig Scully  Award winning formula ” Coffee Porter “. A deep chocolate brown porter, sweet hint of caramel to dark-roasted malts. Perfectly balanced to deliver a smooth mouth feel with flashes of light roasted coffee running through. Franciscan Well Jameson Stout won Irish Whiskey Barrel Aged Irish Craft Beer  at the Irish Whiskey Award 2014 and was a favourite at this year Dublin Whiskey Live. From grain to glass, this micro brewery has combined modern technology with age old traditions, brewing classic beers , including lager, ale, stout and wheat beers using additive-free ingredients and the results are superb carefully crafted Irish beers made from malted barley, hops and yeast, lovingly sourced from Ireland, UK,Germany,Czech Republic and the US.

I have never been tempted to go in search of spiritual enlightenment by climbing Croagh Patrick on Reek day but with a bottle of this brew in my rucksack ” to quench the thirst..like “,I might just give it a go. However, for those of you who have been there and nearly did it, you could just opt for a different kind of pilgrimage by heading straight down to your nearest off-licence as this special whiskey will be available for a limited period only, priced at RRP €34.99. Still a pilgrimage but this time in search for mercy and gratification. A Classically trained Chef,Food writer, and Culinary instructor having worked in some of Dublin and London Michelin star establishments such as Chapter One, Dublin, Gordon Ramsay, London & the 5* Boutique hotel, TheDylan among others. His work is regularly featured in some of the leading magazines and newspapers in Ireland and he is currently working on a book about Irish Honey due to be published later in 2015.