Undercover Bartender: A Night from the Other Side of the Bar at Fade Street Social 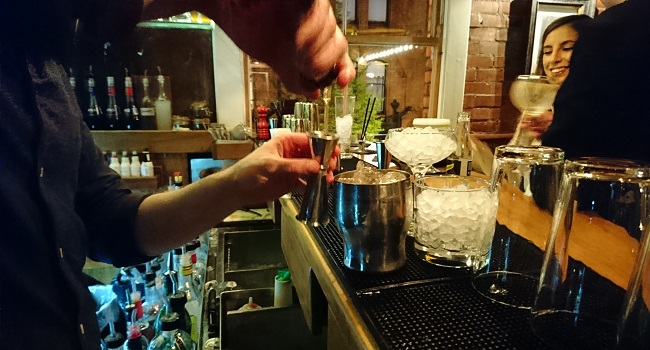 A great bar is a theatre and each cocktail, pint and bottle of wine served is a performance. We customers attend the show to admire the scenography, our moods adapt to the soundtrack and the lightning, and as we enjoy the play there is a team behind the courtain making sure this choreography seems effortlessly put together. When reviewing a bar, you get to appreciate the final result but the nuances of what goes on in the backstage are lost. Eager to experience one of Dublin’s most popular bars from a different perspective, I was welcomed to act as a waitress on a hectic Thursday function at Fade Street Social.

On arrival, we agreed I’d be allowed to get involved and do as much as I feel comfortable with. Since I’m already in costume (black blouse and trousers, comfy shoes) I might as well pour some pints as the line behind the beer tap is not getting any shorter. 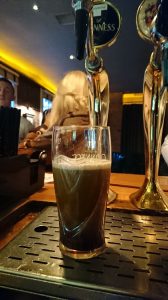 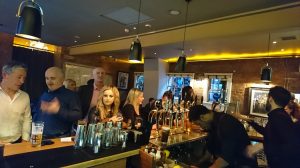 ACT I: Three Friends Walk Into a Bar

A group of three walk-ins asks me for a table. The only empty ones in Fade Street Social have shiny “Reserved” signs so I ask them to wait for a moment and they swear it’s just for one quick drink.

After checking a touchscreen with so many buttons you’d worry the bar is actually a spaceship, a waitress tells me they can sit in 402… or was it 204? Failing to remember this line can really ruin a scene so I make my best effort to memorise it. “Three Espresso Martinis for the three guys in 204… I mean, 402” I tell Christian, the bar manager and my boss for the evening, a cocktail making machine and a mix of coolness, friendliness and authority with a dash of toughness.

You can’t be any other way, leading the bar at an establishment that employs 85 people. Through the night, I noticed a remarkable amount of these caffeinated -inis being ordered. Other popular orders are more challenging and interesting, brought to life from the innovative pages of Fade Street Social’s menu cocktail, for example, Away with the Fairies (vodka based with green apple syrup, cherry bitters and eldelflower foam) and Soothe the Beast (gin, eldelflower liqueur, lavender syrup, whites and citrus) which seem to do well with female cocktail enthusiasts, and Strumpet City (Irish whiskey, tobacco liqueur, Peychauds bitters and orange twists) plus various renditions of the fashionable Gin & Tonic which were often drank by men.

“Wanna shake this one?” Christian says, and he hands me a stainless steel cocktail shaker containing an Into the West (coconut rum, golden rum, coconut syrup, vermouth, fresh lime and coriander). I’m shaking, on the inside, as for the first time this evening I’ve been put on the spotlight and it’s show time.

It’s not that I’ve never mixed a cocktail but this feels like the difference between singing at a karaoke bar or on a real stage. The drink is garnished and the scene ends but there’s no time to pat myself on the back as a man just ordered two Gin and Tonics and I had the nerve to make eye contact.

“If you use Hendricks, garnish with cucumber… Bombay goes with lime” says to me one of the other bartenders. Everyone knows where everything is, as if the furniture was transparent. The senior staff members were aware of my reason for being there, others probably just assumed I was doing a trial shift. 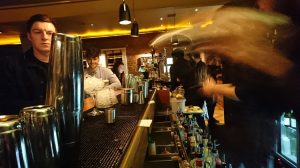 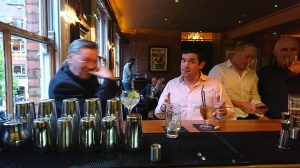 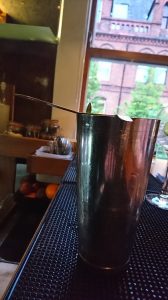 Behind the bar it’s crowded, busy and getting hotter by the minute. It’s hard to keep up in a team where everyone seems to know instinctively what to do. Christian has no idea of how many cocktails they mix on a busy day, “We serve hundreds of customers” is all he says about it.

Let’s try to do the math: even a figure in the low hundreds, let’s say 300 customers, would equal 750 drinks if we calculate a modest average of 2.5 cocktails per person. Spread between five hours and you’ll get 150 cocktails per hour or 2.5 per minute. ACT III: A New Perspective on What Not To Do

As I bring a second round of Espresso Martinis to the guys in 204 (or was it 402? I’ll just say both combinations just in case), a group stops me to place an order. “Being a reasonable patron 101”: don’t try to stop a waitress carrying a tray of cocktails, it’s just not gonna happen.

On my way back I attempt to take their order and, in their indecisiveness, they edit at least three times. It felt like playing Simon Says, if Simon wasn’t sure if he wanted blue or yellow, or maybe blue again and then, when you think you’re done, red. Oh, and a pint of 5 Lamps. 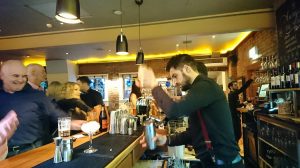 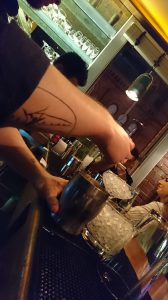 There is a 30th Birthday party going on in the heated terrace and empty glasses are piling up. Looking for a fool-proof task to make myself helpful, I decide to clear up the mess a little bit and get a few empty pints back to the dishwasher. Dear person who used your pint glass as an ashtray, just don’t.

Other little don’ts are less obvious from the other side of the bar: forgetting to mention that you are paying separately when ordering the bill makes life difficult, not using a coaster or serviette and then letting the cocktail menu get wet by the (often sticky sticky) drops sprinkled on the table is also less than ideal. 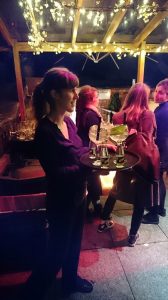 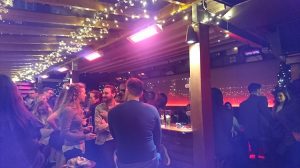 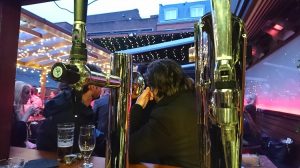 Bartending in a busy bar is like playing Tetris: you assemble drinks to watch them disappear faster and faster as the night progresses; successes are quickly forgotten, and you need to fix mistakes immediately, before everything becomes a mess.

Of course, there’s not perfection but great performers are not rigid and the ability to improvise when the scene turns unfamiliar is as valuable in Broadway as it is here. A glass breaks and seconds later there’s no trace; the young man that has to clean it up has either an enviable poker face or an unbreakable good mood.

Tonight’s is a night for fun and laughter, so there’s no time for drama, specially not backstage where harmony is restored immediately when something less than ideal occurs. I noticed how disagreements are brief and there seems to be no hard feelings, in fact, it’s past eleven and the energy levels seem to be as high as three hours ago (well, theirs). One of my coworkers for the night gives me a hand while I polish glasses, a subtle way to make me aware I’m being slow. We bond while agreeing on how loud all-girl tables can be, specially since a couple of examples keep treating themselves to chilled white wine in the winter terrace party. Been there, done that, can’t judge them.

But there were also some cliches averted. I served Old Fashioneds to customers both young and young-ish, female and male. This sleek and skillfully crafted rendition of the timeless classic makes more than one cameo through the night and, having had the pleasure of sipping one as part of the audience, I now realise that it’s the sort of drink that bartenders enjoy mixing.

After their third round of Espresso Martinis, the friends in 402 (by now, no hesitation) are ready to go. The man stands and offers me a handshake. “Thanks for looking after us this evening” he says, leaving a folded €5 note in my hand while smiling satisfied with himself, perhaps feeling like the Wolf of Wall Street. It would be rude not to accept it, I suppose. My shift ends on that note, and if it was an audition, I’d go home feeling they might call me back. I asked Christian what he actually looks for in a candidate and he simply told me “good attitude and a willingness for hard work.” There was plenty of both in every person I met on that night, and yes, eyes were rolled and at moments it got stressful, but you can’t fake synchronicity like that, or at least not every night for several hours at a time.

Working in a busy bar requires more than just stamina, at least, in a place of this quality. It’s a demanding role that goes beyond mixing, shaking and pint-pouring, it takes people skills, empathy, patience and organisation. I left Fade Street Social on that night with a meaningful reminder of all that goes into an Instagramable cocktail, not just the colourful ingredients but the passion, the effort and the team that makes it possible. 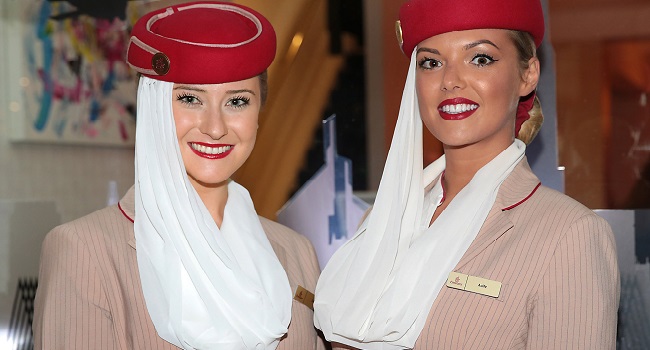 The Inside Track: Emirates Cabin Crew Members Share their Favourite Things to Taste and Enjoy in Dubai 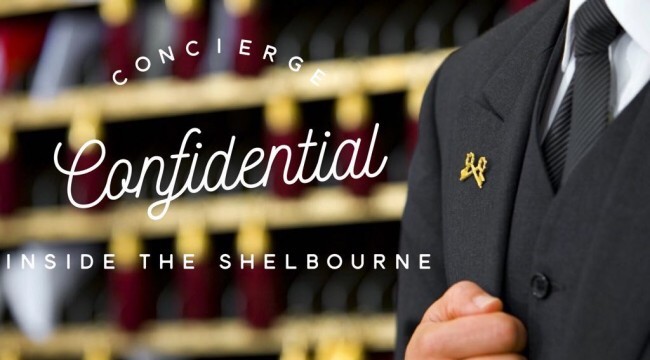 Concierge Confidential: Inside The Shelbourne with Concierge Denis O’Brien 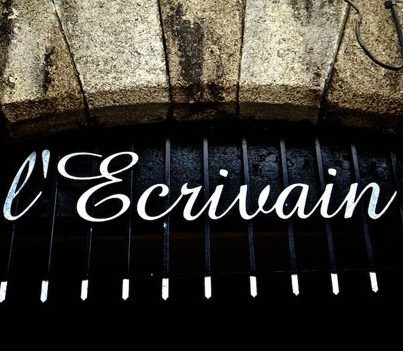 Meet the Team Behind the Star – l’Ecrivain Celebrates 27 Years