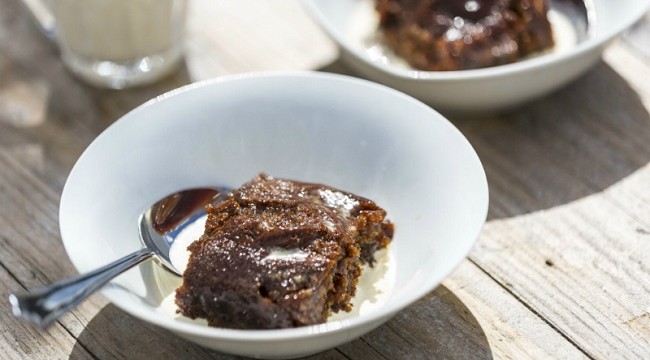 Celebrating the very best in food and drink, Great Taste, the world’s most coveted blind-tasted food awards, has reached its grand finale for 2016. The Great Taste Golden Fork for the best food or drink in Ireland was presented to Dunnes Stores for its Simply Better Irish Handmade All Butter Sticky Toffee Pudding.

Commenting on the superb execution of this product, the judges admired the texture and flavour of the dates, which really come through. This classic pudding was described as a “dollop of cream or custard away from a heavenly experience.”

Out of 10,000 products entered into Great Taste 2016, the Simply Better Irish Handmade All Butter Sticky Toffee Pudding was celebrated as the best tasting product in its region at the Great Taste Golden Forks Dinner held on Monday 5 September at the Royal Garden Hotel in Kensington, where over 300 guests from the world of fine food gathered to hear the results of many months of rigorous judging.

The Golden Fork from Ireland was sponsored by Bord Bia and also nominated this year was Great Taste 3-star award-winning Heritage Cure Ham from Tipperary-based James Whelan Butchers and Holycross Original Butterscotch Sauce made by The Tipperary Kitchen from Thurles.

Great Taste, founded in 1994 and organised by The Guild of Fine Food, has judged over 110,000 products in the last 22 years; each one has been blind-tasted by a team of judges who are dedicated to finding the most exquisite tasting food and drink regardless of branding or packaging. This year’s final judges included TV chef and author, Valentine Warner, MasterChef judge and restaurant critic, Charles Campion, fifth generation baker, Tom Herbert from Hobbs House Bakery, food buyers from Harrods, Selfridges, Fortnum & Mason, Harvey Nichols and Waitrose, James Golding, chef director of THE PIG Hotels, and Kevin Gratton, chef director of HIX Restaurants, who together re-judged the 3-star winners to agree on the Top 50 Foods, the Golden Fork Trophy winners and the Great Taste Supreme Champion for 2016.