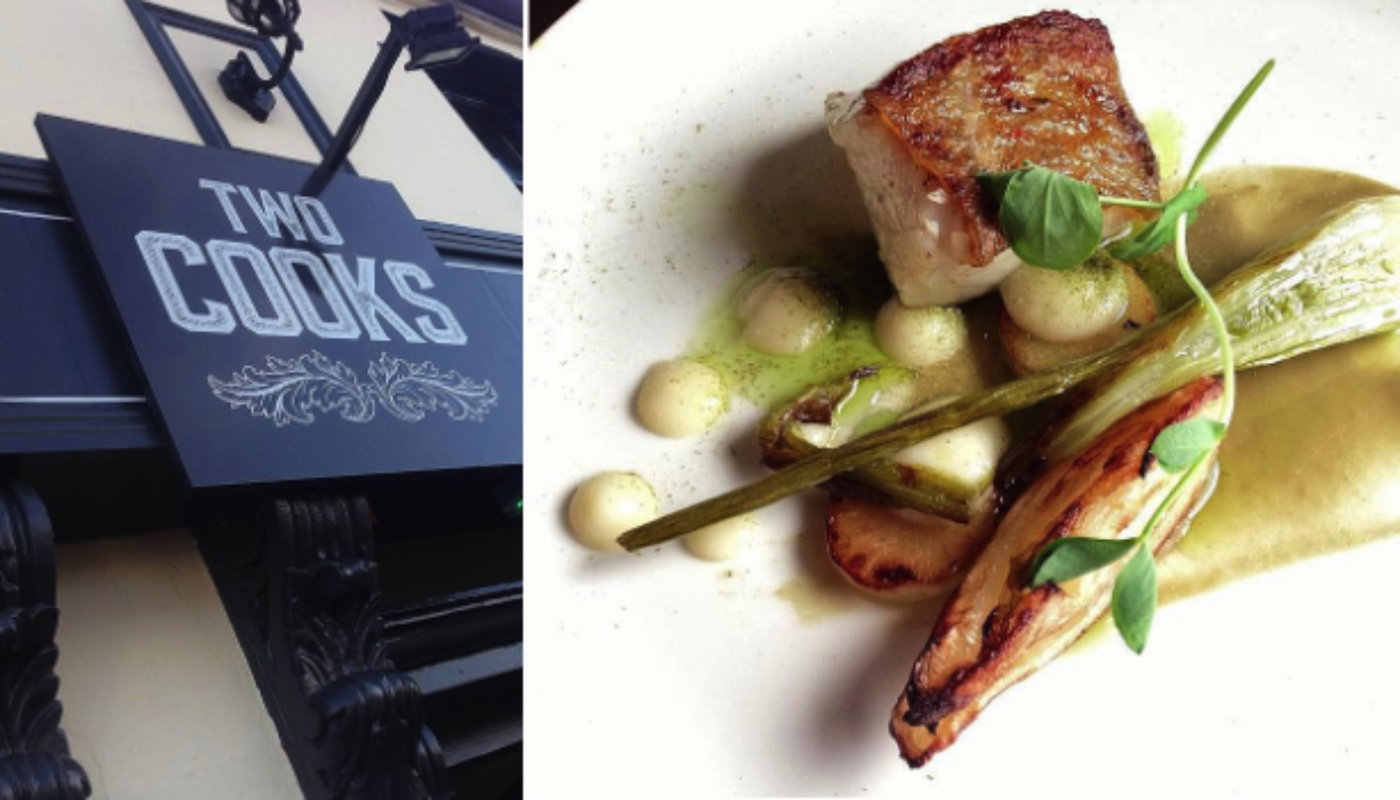 Two Cooks with a Shared Passion

It’s hard to keep up with all the new restaurants that have opened in the past few months. There now appears to be a mood of optimism in the food industry which after a number of very tough and challenging years is welcomed. Restaurant goers are spoilt for choice especially in Dublin but, as someone who believes that there are great dining-out options available all around the country, I have been hugely interested in what has been happening outside the city.

One recent restaurant-opening that caught my eye was Two Cooks in Sallins, County Kildare. Two Cooks is owned and run by husband and wife team Nicola Curran and Josef Zammit, two highly experienced chefs. Most recently, Curran worked as teacher in Cook’s Academy and Zammit was Head Chef at Brown Bear in Naas for a number of years. Before that they worked in London – Curran at The Ledbury and Zammit at Restaurant Tom Aikens – before returning to Ireland where they worked at the now closed Michelin starred Mint under Dylan McGrath in the Dublin suburb of Ranelagh. Two Cooks is the result of their dream to work together and open their own restaurant and I was really looking forward to dining there.

The pair developed the menu jointly and whilst Zammit heads up the kitchen and Curran is responsible for front of house duties, we realised early during our visit that Two Cooks is an adventure that they have embarked on together as equal partners.

Sallins is a small bustling village, a few miles from the large commuter town of Naas but within easy reach of Dublin. The restaurant is located in the village and is part of a charming terraced building beside the banks of the Grand Canal where, on the evening we visited, colourful barges bobbed happily on the water without a care in the world.

Greeted warmly by Nicola when we arrived who led us through the small and compact ground-floor bar area and up some stairs to a surprisingly spacious dining room where the open kitchen is neatly tucked away in one corner. With dark-wooden flooring and tables the room is decorated in warm muted colours and is inviting. Joining me was my old friend John and from our table beside one of the period sash-windows, we sipped on Prosecco Cocktails (created using a homemade plum liqueur) as we watched the world go by and made our choices from the menu.

A 5-course tasting menu (€85 per person with wine) and a set menu are offered during the week. After some initial indecision we decided to go for the set menu which although brief was well thought out and keenly priced at 2 courses for €29 per person (€42 with wine) or 3 courses for €36 per person (€56 with wine). A nicely chosen wine list is also available.

Wedges of an outstanding Sourdough Bread were devoured within seconds of their arrival but we were offered (and accepted) more. With a chewy crumb and a gloriously crusty exterior, this was one of the best sourdoughs that I have eaten in a long time. I was impressed to learn that it had been made in house. This was quickly followed by a morsel of Crispy Cod Skin with Brandade Cream which was everything that an amuse bouche should be – something that excites the palate in advance of the meal that follows. Too many restaurants present lacklustre offerings that serve little or no purpose in the context of the meal as a whole. Not so here. The cod skin was wonderfully crispy and the brandade cream had an impossibly light consistency yet was packed full of the flavours of the sea. Notwithstanding the fact that brandade is a dip made with salt-cod and olive oil and hails from the Mediterranean, this amuse had a distinctly Nordic feel to it which I found appealing. John’s starter of Pork Cheeks, Onion Risotto, Broccoli consisted of slow-cooked and meltingly soft cheek meat encased in a thin coating of breadcrumbs and had been deep-fried until crispy. This was presented on a bed of impeccably made risotto where each grain of rice had its own personal space but was still closely flirting with its neighbour in a seductive fashion. Full of the almost sweet flavour of onions, the risotto was also served with scales of charred onion which, with their caramelised edges, had a slight bitterness that worked well with the dish as a whole. Purple sprouting broccoli completed the dish. Compared to John’s rich starter, my Mackerel, Lime, Cucumber, Dill was a very clean and fresh tasting dish. Elegantly presented, it included pan fried finger sized pieces of mackerel with cucumber served in two ways – charred and pickled. Whilst all this was delicious, the accompanying lime gel elevated this dish to something truly memorable. Compared to many other citrus fruits, lime has a sweet fragrance which I felt worked particularly well with the natural oiliness of the mackerel and the cool, cleansing properties of the cucumber. I loved it.

When deciding which menu to choose, we had both considered the tasting menu which included a Cod, Artichoke, Fennel dish that we had been particularly tempted by. Knowing this, and despite the fact that we were expecting our main courses next, we were each brought this dish to sample, which was a very thoughtful gesture and a pleasant surprise. Consisting of a piece of flawlessly cooked cod with fennel served braised, charred and as a purée, it also included an unusual caper purée. This unexpected addition was extremely effective as the slight astringency of the capers highlighted the inherent sweetness of the fish but also complemented the anise flavours of the fennel. A glass of a crisp but intense Von Winning Riesling was the perfect accompaniment. Our main courses were also excellent, perfectly balanced dishes. John’s Duck, Choucroute, Parsnip, Mushroom Broth was comforting to eat and was cleverly paired with a light but intensely flavoured mushroom broth that prevented it from sitting heavily on the stomach whilst my Lamb, Broad Beans, Burrata had a real feel of spring about it. It included Burrata which is essentially a pimped-up mozzarella. The fresh mozzarella is formed into and is then filled with soft stringy curd and cream which is released when you break into the centre. With a lovely buttery taste, I thought it was perfect with the sweet grassy lamb. Sides of velvety smooth and very buttery Mashed Potatoes and some Romanesco were also delicious. Although our appetites were well sated, we both still found room for dessert. Two options were offered so we decided to choose one each. With a Naughty or Nice theme – one dessert was made free from gluten, butter, dairy, sugar etc. and was ‘nice’ in contrast to the ‘naughty’ version where they were included. It emerged that my excellent Carrot Cake, White Chocolate, Date was the naughty dessert whilst John’s Hazelnut Panna Cotta, Chocolate Ganache, Keffir Ice-Cream was ‘nice’. In truth, the desserts were each individually a deliciously rich and indulgent way to end the meal and we couldn’t decide which we preferred. This was an innovative and playful idea which worked well. We finished our meal in languorous fashion over coffees and Chocolate Truffles.

In the days following my meal in Two Cooks, I found myself reflecting many times on the meal that I had eaten there. There was something so refreshing about the whole experience that excited and thrilled me. This is food produced by two people who are passionate about what they are doing and this comes across in every dish that is served. I have already had some very good meals in 2016, but this is one that I think it will be hard to beat. I would recommend taking a trip to Sallins as soon as you can! 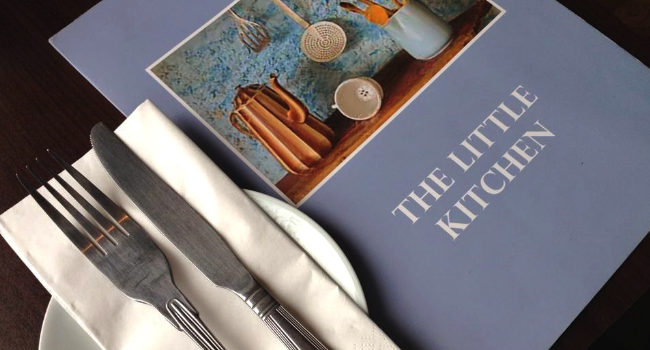 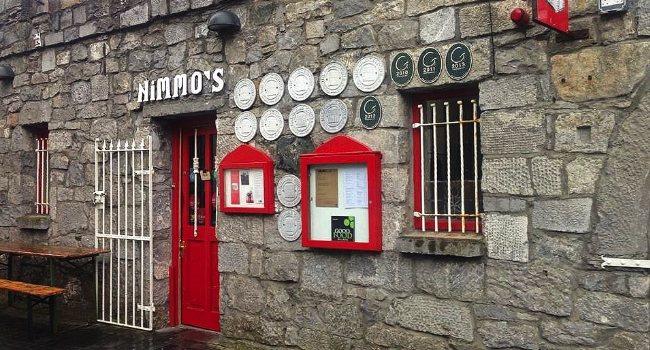 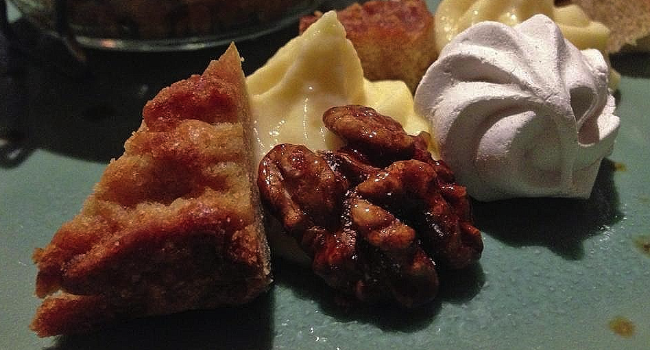 Dinner Delights at The Candied W…