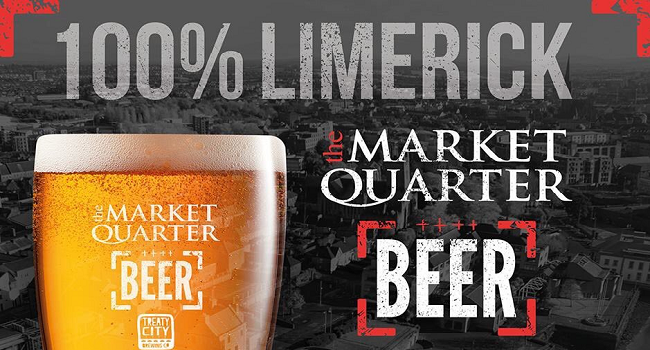 Limerick’s Treaty City Brewery has recently launched The Market Quarter Beer in collaboration with publicans from the city’s Market Quarter who wanted to craft a beer that’s 100% Limerick.

Stephen Cuneen of Treaty City Brewery told local newspaper Limerick Leader that “The Market Quarter Beer is slightly floral and fruity with a medium malt flavour. It is an incredibly drinkable session beer low in bitterness and light in colour.” He described the beer as light and with a good presence of hops.

Market Quarter Beer was launched last Friday 18th of August and it’s the result of an idea that a team of publicans had of coming up with a beer that they could serve exclusively at their pubs. They met with Stephen Cuneen of Treaty City Brewery who accepted the challenge and came up with a balanced and approachable beer that appeals to craft beer drinkers and those who enjoy mainstream beers as well.

What a weekend it’s been. Our brand new exclusive brew has gone down a storm in #Limerick. Thanks to the guys in @TreatyCityBrew pic.twitter.com/Y68Gf6iBZo

It’s an independent Artisan brewing company based in Ballysimon Road, Limerick. They brew small batch and handmade beers with the finest ingredients combining unparalleled flavor with exceptional quality and sourcing local ingredients as much as possible.