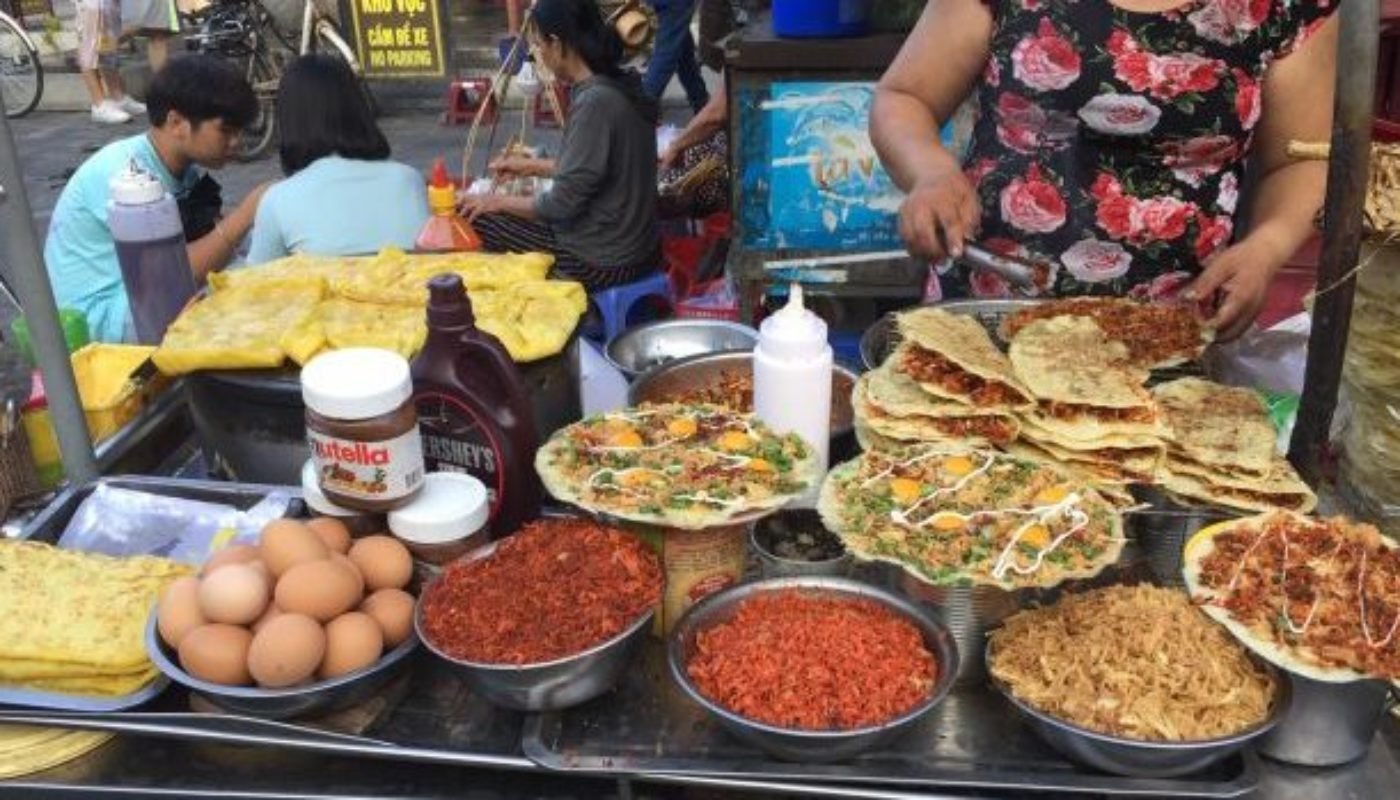 Unforgettable, characteristic, singular – Vietnamese food is balanced between the sweet and salty. Fresh herbs (that is, leaves/foliage) are plentiful and form the bed of many dishes. Spicy dishes aren’t as common as you might think, as chilli sauces are provided in separate bowls. From Goi Cuon (opaque spring rolls) and Banh Mi (the best sub you’ll ever taste) to Banh Xeo (pancakes with various fillings), Pho (noodle soup), and Cha Ca (sauteéd white fish, served with spices and noodles), there is such a diversity of food here that you will never, ever be stuck for choice.

The street food, in particular, is amazing. Across Hanoi, Hoi An, Da Nang, and Sa Pa, we sampled the cheapest, best food I have ever experienced. From meat to leaves, from fruit to bread, pancake to fritter (sorry, but even in the line of duty I couldn’t sample the mouse or chicken claw options), this is a fundamental food experience that everyone should try. A highlight was in Hoi An, where a banana pancake was cooked and presented within two minutes. That something so uncomplicated could taste so wonderful isn’t too much of a surprise, of course, but (a recurring theme with Vietnamese food) it is still a divine mystery how good these foods taste. You could easily fill your boots for less than €2/€3.

We can’t recall the street name, but let’s not concern ourselves with that – there are street food traders all over Hanoi, so to say you’ll be spoiled for choice is an understatement. The one we visited on our first night in Hanoi seemed to be very much like all of the others: as basic as it gets – a makeshift kitchen, small plastic tables and chairs, what seemed to be the entire family occupied at getting things done. There is just the one item on the menu: pork and shrimp pancakes. As we wait on a small pedestrian path by the kitchen, Hanoi’s never-ending cavalcade of horn-beeping motorbikes pass by. Within minutes the food is prepared, cooked and delivered: hot, crispy pancakes, stuffed with pork and shrimp, a separate platter of a mound of leaves/herbs, side dishes of oils, and a cold beer each. As an introduction to street food, it is a wonder of composition and ingredients, atmosphere and tastes, slippy fingers and dripping chins. For three people, the meal costs around €8. In anyone’s language? Remarkable.

From street food delights to high-rise ordinariness? While the views of the lakeside from the 6th floor of Cau Go Restaurant – located right in the middle of the wonderful surround-sound chaos of downtown Hanoi – are exceptional, and while the food is good, there is something disconcerting about the divide here and most other places we eat in. Yes, it’s Vietnamese fine dining (nothing wrong with that), but it’s as real as a mirage and a service for, mostly, European and American customers with more money than sense. A meal for five, including wine, beer and (get thee behind me, Satan!) bottles of ‘artisan’ water, cost approximately €130. 4th-6th floors, No 7 Dinh Tien Hoang Street, Hoan Kiem District; caugorestaurant.com

We wouldn’t have stumbled across this coffee house gem if we hadn’t decided to walk the 50 minutes or so from our hotel to the ‘Hanoi Hilton’ (aka what remains of Hỏa Lò Prison, which was used by colonists in French Indochina for political prisoners, and later, during the Vietnam War, by North Vietnam for American PoWs). On the way there, opposite the Army Museum, we spied this place. Tiny Café is anything but. Across three open-plan floors, each with sofa chairs and settees (and the third floor with a beautiful garlanded terrace), the areas are adorned with indigenous art and artefacts from different, troubled times. We relaxed for about an hour with two large hit-the-spot ice-cold drinks: a very fine Mango smoothie and a to-die-for Coconut Coffee. The bill for these came to €3.70. 11 Nguyen Tri Phuong, Dien Bien, Ba Dinh; facebook.com/Tinycafe11

Down a small laneway that may or may not have an actual address (and if there is one we couldn’t find it) is a restaurant by morning, day and evening, and someone’s house by night. In fact, it is someone’s house 24/7 (hence the no-name), but the occupants don’t seem to mind their space being invaded by people sitting down for a meal that in many ways is a mirror to roadside eating, except with no motorbikes whizzing past. In other words, this is eating, once again, in as basic a way as can be: rickety chairs, wonky tables, a can of ice-cold beer, and freshly prepared food that you’d come back for night after night. With an elderly family member sitting back watching a subtitled film (starring Clive Owen, seeing as you’re asking) the cook of the house presents us with three plates of Com Ga Hoi An, a traditional chicken/rice dish of the city. It is a feast fit for more than three people, but we manage to chomp it down nonetheless. Dappled with sauces and oils, it knocks the notion of fine dining into a ditch and further consolidates a certain truth: food and atmosphere by themselves are fine, but the combination of the two is unbeatable.

We’re not saying the simple snack of Banh Mi is a rare delicacy beloved by gourmands, but if Anthony Bourdain once said that it’s the best sandwich he had ever tasted then it pays to be on full alert. When Bourdain visited Hoi An some years ago for his acclaimed television show, he called into Banh Mi Phuong, then a tiny street food stall, but now a combined front-of-street and two-storey interior place. When he munched on the stall speciality – a Banh Mi – he declared it one of the best food items he had ever eaten. So what exactly is a Banh Mi? It’s a super fresh baguette filled with herbs, meat, pate, leaves, herbs, spices, vegetables – a tongue-tingling mix of Vietnamese culture and French tradition. Ideal for brunch/lunch, make sure you get to this place before the hunger pangs start to kick in – the queues can be off-putting. And best not to wait until evening, by the way, as when the Banh Mi ingredients are gone, they are well and truly gone. We had ours at a nearby table, and washed it down with fresh coconut water. Of all the restaurants we visited in Hoi An, Morning Glory was the one that hit the spot in more areas than any other. That it has a reputation for being one of the best in the city is a bonus. That its reputation is deserved is the clincher. With split level floors, both of which are cooled down by always necessary ceiling fans, the food here is traditional Vietnamese with added bells and whistles. As such, it is a slightly more expensive, but still bargain basement priced compared to a similar meal in Europe/UK/Ireland. Between three people, we shared the following: octopus salad, Morning Glory salad, White Rose dumplings, spring rolls, pork belly, and rice crackers (the best I’ve ever tasted, incidentally). Drinks included one Signature martini, one Hoi An Autumn cocktail, and one beer. Reader, we rolled out, as round as barrels. The cost? €30.