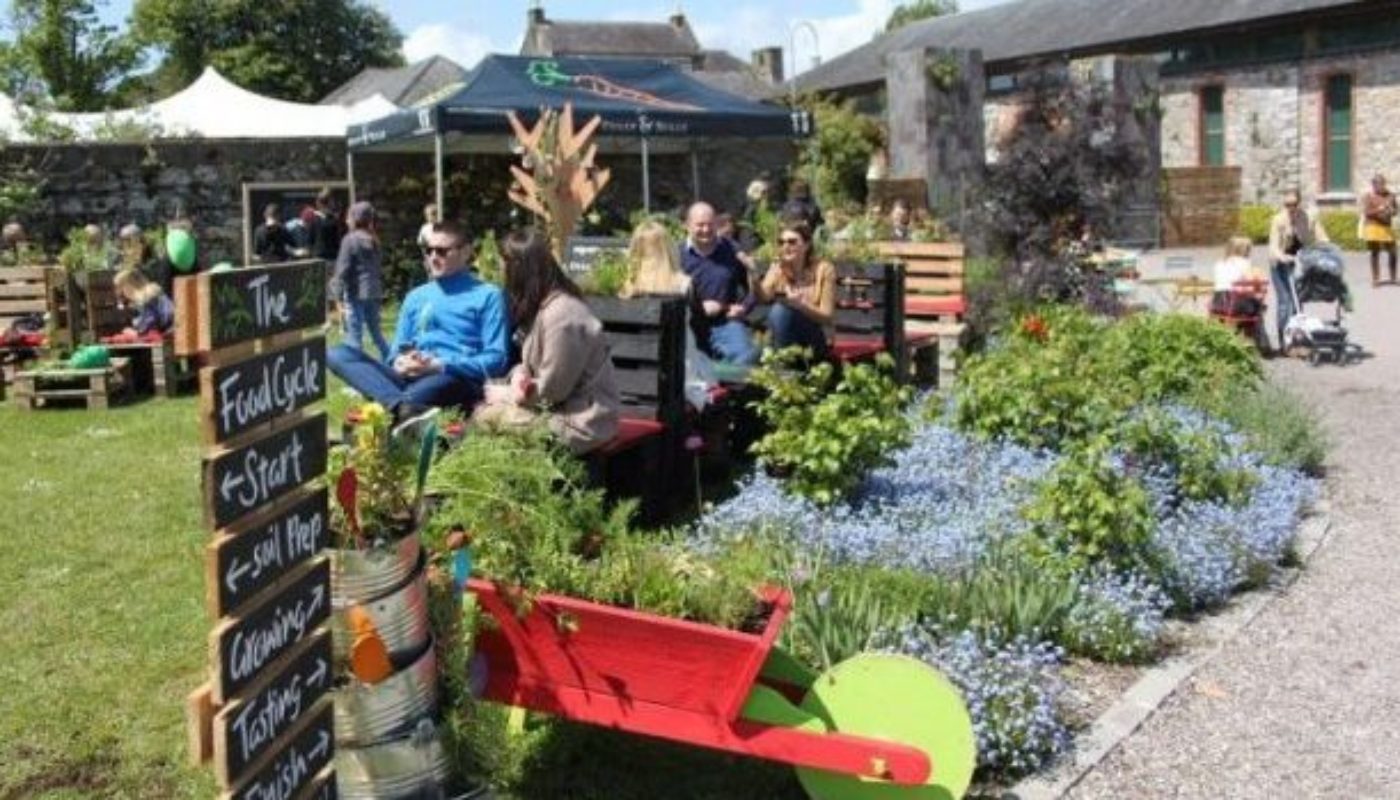 Home » Tickets for All Ballymaloe Litfest 2017 Events Now on Sale

Tickets for All Ballymaloe Litfest 2017 Events Now on Sale

The fifth annual Ballymaloe LitFest runs from Friday 19th to Sunday 21st May 2017, and all of the events over this exciting and stimulating weekend are now confirmed, scheduled and available to book on www.litfest.ie. Every year Litfest tickets sell like the proverbial hot cakes, but don’t worry if your favourite food hero’s event has sold out already, as most participants will also speak at the symposium on responsibility at the Grainstore over the weekend.

Brian McGinn, director of the Emmy-winning Netflix documentary series Chef’s Table, will be interviewed as part of this year’s LitFest and British chef and cookery writer Margot Henderson will be cooking one of the pop-up lunches at LitFest 2017, which will be one of the most sought-after tickets of the weekend. Margot runs the caterers Arnold & Henderson, is the co-patron and chef of Rochelle Canteen in Clerkenwell, and is married to fellow chef and restaurateur Fergus Henderson.

The other pop-up lunch at this year’s LitFest will be cooked by Dublin-born Robin Gill whose string of innovative and exciting London restaurants – The Dairy, The Manor and Paradise Garage – has made him one of the hottest chefs in London. Making a welcome return visit to LitFest 2017 too is Claudia Roden, the beloved Middle Eastern cookbook writer and cultural anthropologist.

Ben Reade also returns to Ballymaloe, the former Head of Culinary Research and Development at Noma’s Nordic Food Lab and currently following the path of research-based cooking at Edinburgh Food Studio. Ben will be joined by his partner in the creative work at Edinburgh Food Studio, Sashana Souza Zanella and together they will be creating one of the always first-to-sell-out Saturday night pop-up dinners in the Cookery School.

The second pop-up dinner on Saturday night is in Ballymaloe House, and features a menu chosen to complement natural wines selected by France’s only female Master of Wine, Isabelle Legeron, founder of Raw Wine, the UK’s largest artisan wine fair, which has since expanded to include an annual event in Berlin and New York.

Long-time Paris resident Trish Deseine will come to LitFest for the first time this May to talk about keeping it real in the food world. Recently returned to Ireland, with over 15 books in English and French to her name and a lifetime of good cooking under her belt, she has brought an extraordinary wealth of knowledge back with her to share, along with a unique perspective on Irish food culture.

Investigative food journalist Joanna Blythman presents a talk appropriately titled “Thorn in the flesh of the processed food industry and supermarkets”, continuing her insightful and authoritative commentary on the food chain. Author of seven books including Swallow This: Serving up the food industry’s darkest secrets, What to Eat, Shopped and Food We Eat and multi-award winner for her articles and books, Joanna also regularly broadcasts on food matters on programmes such as Women’s Hour, Radio 4 Food Programme and Newsnight. GIY’s Michael Kelly will join LitFest 17 to review a spectacular year for the organisation which saw the opening of their brand new GROW HQ headquarters in Waterford, host to a café, workshops and food-producing gardens – a shining example of how a grass roots campaign can grow to amazing heights.

From another grassroots organisation, Greenhorns in New York, Severine Von Tscharner-Fleming will be discussing her work with the young farmer movement with the Young Farmer’s Coalition, FarmHack and the Agrarian Trust. A farmer, activist, and organiser based in New York’s Champlain Valley, Severine has spent the last decade creating connections, conversations and support structures with and for new young farmers.

Christian Puglisi, chef-owner and co-owner Kim Rossen of Relae, Manfreds and Baest in Copenhagen tell the story of founding their own farm (directly inspired by a visit to a previous LitFest!) to supply their restaurants, and the impact that has had on their working lives with a talk called Farm of Ideas.

Michael Pollan’s cookery teacher Samin Nosrat comes to LitFest 17 to discuss her book Salt Fat Acid Heat: Mastering the Elements of Good Cooking, and to give a cookery demonstration hosted by Rachel Allen. Having worked with the best and brightest, including 2015 LitFest participant Alice Waters of Chez Panisse, for the past fifteen years, Samin’s goal is to “create work that inspires, creates community, and raises cultural, social and environmental awareness.” Clare Lattin and Tom Hill from Ducksoup, the natural wine bar and restaurant in the heart of Soho, London, are hosted in a cookery demonstration by Darina Allen on Saturday morning, where they will be delivering the unique, fresh and lively take on seasonal ingredients that has made their tiny local restaurant an influential player on the restaurant scene.

There will be a Saturday morning Lens and Larder workshop with Imen McDonnell and Cliodhna Prendergast, panel discussions on Our Table where Michelle Darmody from The Cake Café and Ellie Kisyombe, a Direct Provision activist from Malawi discuss their not-for-profit café in the Project Arts Centre. Garrett Fitzgerald and James Boland of Brother Hubbard on Dublin’s Capel Street will discuss their new cookbook and there will be foraging with Alys Fowler, gardening columnist with The Guardian.

Drinks highlights at LitFest this year include cocktails, a talk and tasting from Ally Kelsey of the multi award-winning White Lyan cocktail bar in East London and Cork-based Andy Ferreira of cocktail bar Cask. Winner of ‘Most Creative Bar’ by Timeout Bar Awards 2016, White Lyan is the first bar in the world that has no perishables at all – no ice, no citrus or other fresh fruit. Journalist, writer and broadcaster Tomás Clancy talks on Wines of Germany, Mary Dowey of The Gloss talks about and tastes some fabulous fizz with superb champagnes & sparkling wines from family-owned estates, Kevin O’Gorman, Master of Maturation, Midleton Distillery and Patrick Purser, forester, talk about Irish Whiskey and Ger Buckley, Master Cooper at Midleton Distillery will give a demonstration on barrels and cooperage, an ancient craft and skill, dating back thousands of years.

This year LitFest will celebrate food and drinks writing but also continues to evolve the strand that was introduced at Litfest16, Our food – what’s the story?, designed to give fresh insights and questions to think about, as well as suggested actions to take long after the festival is over.

The Grainstore will again serve as an exciting auditorium hosting the symposium at the centre of the festival. Over the weekend, the symposium at Litfest 2017 will stage a thought-provoking and inspiring series of short talks and presentations. Gathering an interesting and dynamic pool of professionals, writers, experts and authorities from at home and abroad, the festival will focus minds and thoughts on the question of responsibility – our responsibility as cooks and eaters. The LitFest 2017 symposium on responsibility is designed to spark imagination, generate discussion and prompt action in attendees to recognise their individual role as a crucial link in the food chain. Every time we cook something we have a responsibility – a responsibility to the people we are cooking for and the people who produced the food we are cooking. We have a responsibility to the environment and to the planet, and each choice, every action has its own impact. This crucial conversation, led by some of the most thought-provoking and dynamic writers and thinkers about food will be passionate, factual and inspiring and is a must for all who eat, and cook.

And, as ever, the Big Shed will be the social hub of LitFest, packed to the rafters with excellent food stalls and drinks stands, and thronged from morning ‘til night with LitFest-goers chilling out and catching up. The bar continues to be raised with the calibre of speakers, chefs and culinary industry professionals who will descend on Ballymaloe next May to spark conversations and invigorate debate about all things food & drinks-related.

The full schedule of participants, events and tickets for all the events are all available on the website, with tickets on sale from Monday January 9th. To get a sense of the atmosphere and the action at LitFest 2016 read TheTaste round-up HERE.