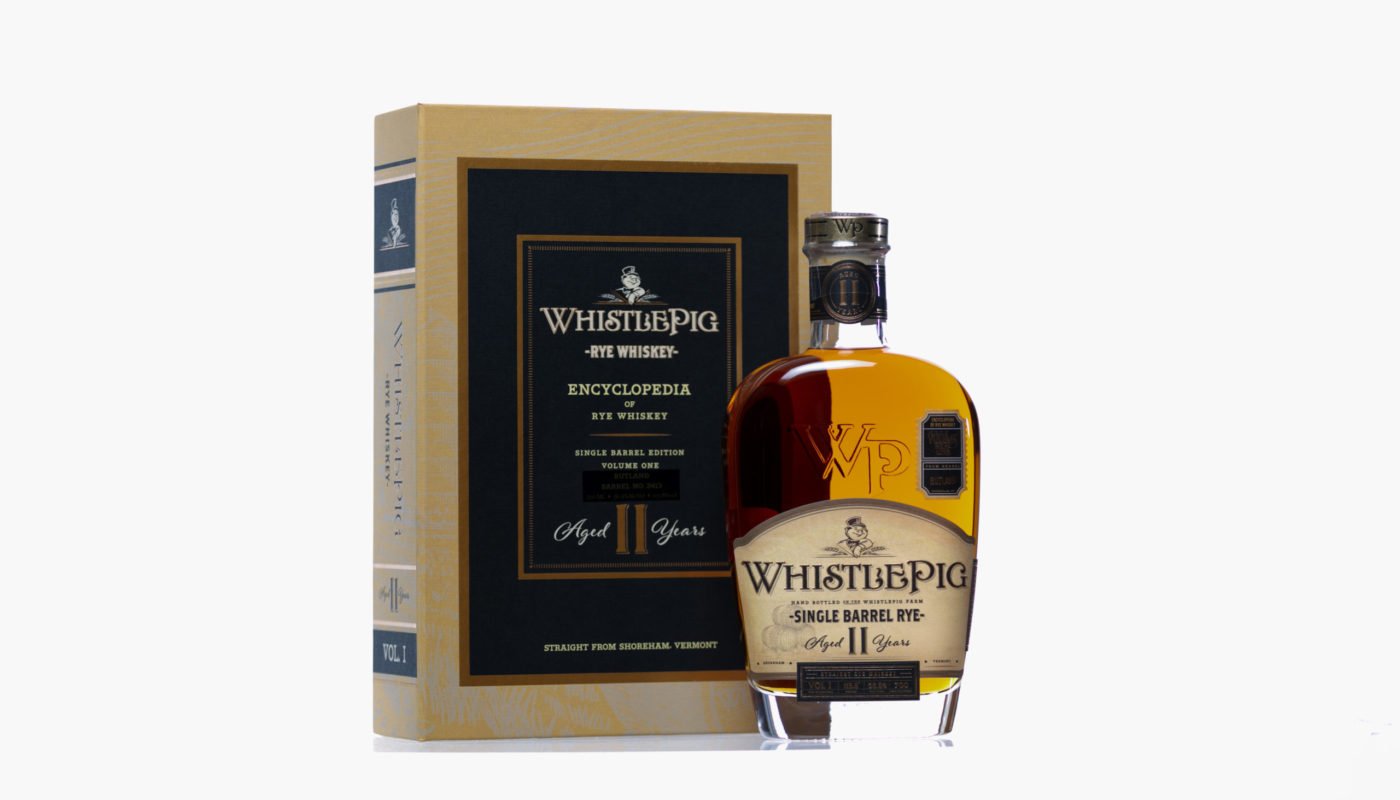 In the first of a collection of five single cask bottlings from the WhistlePig Distillery in Vermont, comes Volume 1 in “The Library Series.”  Produced to celebrate the ultimate in aged Rye whiskey, each annual edition comes in a leather bound Encyclopedia so that with every Volume, the collector will be building their own library. Volume 1 was aged for 11 years in virgin American Oak and was named “Rutland Barrel” in honour of a local Vermont township. Every other Volume will also carry that feature.

The entire project was initially commenced under the late Dave Pickerell’s stewardship. Known worldwide as the Founding Father of the American Craft Distilling Movement, Dave inglwas master distiller and blender in WhistlePig before he sadly passed away in 2018. Together with his colleague Pete Lynch who has become his successor, he decided that they needed to set aside some of their precious rye stocks and allow them additional ageing and care. After a meticulous cask selection, they settled on virgin American Oak with the sole aim of capturing the very essence of rye whiskey. As one of the final projects for Dave to have worked on, The Library Series stands out as one of the last opportunities to embrace his remarkable legacy. And with the whiskey itself bottled at the cask strength of 56.9% ABV, this is rye that is not just supremely crafted, but captured in its purest form. It is available exclusively from The Single Malt Shop.

In 2007, a group of people decided to buy a farm in the idyllic surroundings of Shoreham, Vermont. Inspired by the wonderful nature all around them, they started conjuring up plans of making a hyper local Vermont whiskey. Their dream was to grow their own rye, harvest oak from local forests to make unique barrels, source water from the estate well and to distill and age it all on site. In 2015, it all became a reality when Dave Pickerell ran their first distillation in a copper still he specifically made and customized for them. His WhistlePig mantra was soon born, “Our grain. Our water. Our wood. We call it the Triple Terroir.”

Such a groundbreaking approach, indicates the sheer strength of character of what makes WhistlePig stand out. Whether they’re working with older outside stock or their newer farm distilled spirit, their dedication to creating the finest rye whiskeys in the world is totally unrivalled. The results speak for themselves. WhistlePig’s portfolio is the most awarded home of rye whiskeys in the world.

ABOUT THE SINGLE MALT SHOP

The idea for The Single Malt Fund came about on a trip with friends to Islay, on a cold and wet January weekend. Over a dram or two, our founders thought it would be a good idea for whisky enthusiasts around the world to be able to invest in their favourite precious liquid. At the same time, they wanted to allow investors and the general public alike to purchase any stocks that we source, on an on-going basis. So, The Single Malt Fund and The Single Malt Shop were born. As whisky fans ourselves, we are delighted to be a new player in the industry and look forward to playing a small role in promoting the liquid that we all love.

WHISTLEPIG VOLUME 1 OF THE ENCYCLOPEDIA SERIES, AVAILABLE EXCLUSIVELY FROM THE SINGLE MALT SHOP

Price: €490 from The Single Malt Shop