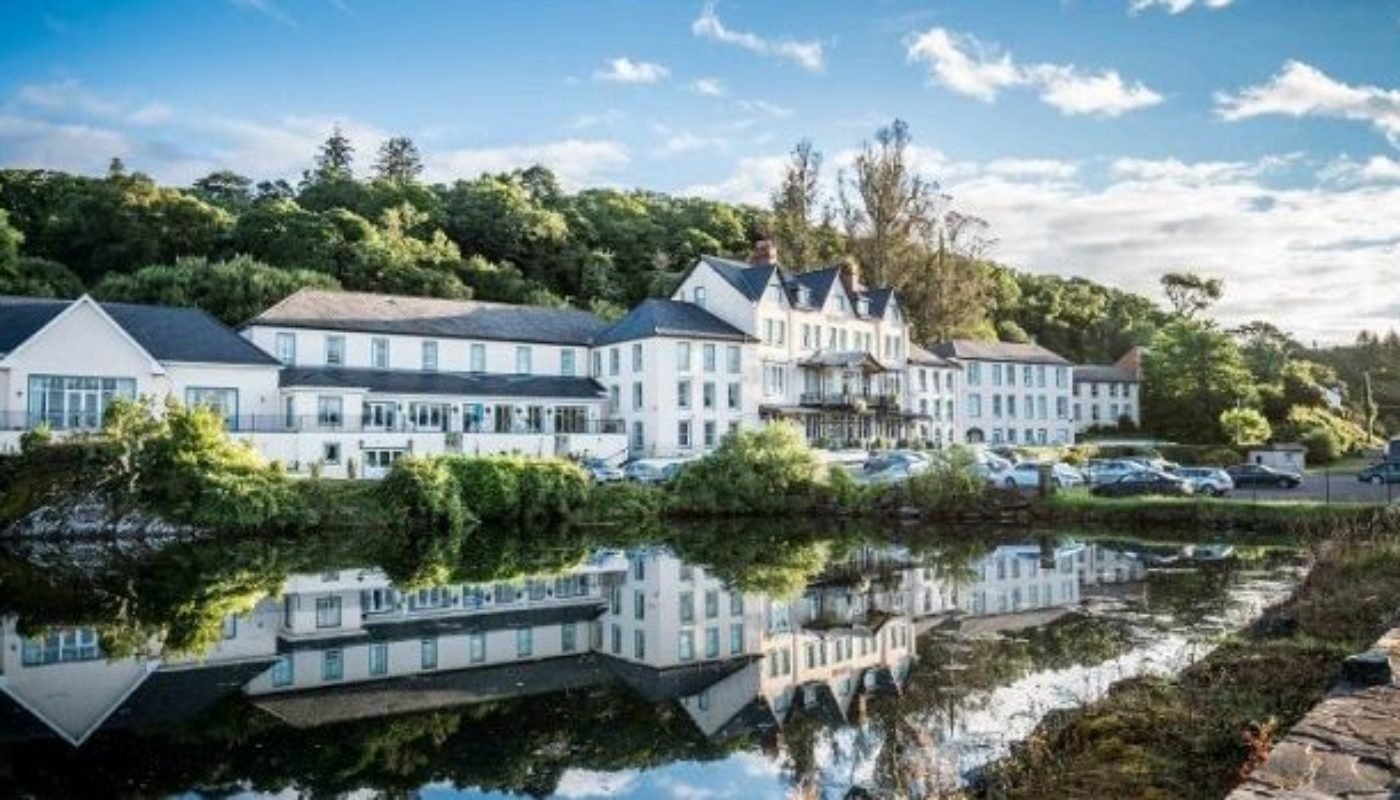 Just off the lobby of Eccles Hotel in Glengarriff nestled in the quiet nook that is the libary is a chaise longue known as ‘Maureen’s Chair’.

Perfectly placed to make the most of both the expansive views straight on to the bay and the warmth emanating from the cast iron ivory fireplace this was the favoured seat of Hollywood icon Maureen O’Hara, who lived close to the hotel before she moved back to the US a short few year before her death in 2015.

Perched above the library is the Yeats Suite, named after another frequent visitor to the hotel W.B. Yeats, who penned many a poem from the room.

These are just two features that highlight the incredible history of this institution in West Cork hospitality which was Ireland’s first purpose-built hotel when it was opened in 1745. Eccles Hotel has been welcoming guests for over 250 years to this small seaside village along the Wild Atlantic Way and Ring of Beara, but 2017 will go down as the start of a new chapter in the hotel’s history; with new General Manager Aileen Hanley and Head Chef Nick Davey leading the charge to restore this grande old dame to her former glory.

Sparking off this resurgence were new owners hoteliers Ray Byrne and Eoin Doyle, who purchased Eccles in July last year. Having previously worked with Ray, Aileen was cherry picked to take on the role, coming on board in January.

Living in Kenmare, “only 25 minutes over the road”; the new GM explains she is in fact neither a Kerry or Cork woman but grew up in a house at the bottom of Hill of Tara, county Meath, her grandparents being the last private owners of the hill.

Her link to Kenmare is her husband Patrick, whose parents own the Landsdown Arms in the town. When his father Bobby Hanley became ill in 2013, the couple returned to his home place to spend time with him and managed together for two years the five-star Sheen Falls Lodge.

The duo firmly re-established the award-winning property during their tenure, earning the hotel prestigious awards such as Condé Nast Traveller No. 1 Resort in Europe, Top 80 in the World and No. 1 in Ireland.

While Patrick is currently the GM at the Brennan brother’s Park Hotel Kenmare, Aileen says she always had her heart set on Eccles Hotel as her late father-in-law managed the property in the late sixties.

Now at the helm of the historical hotel, she feels as if she is only at the beginning of uncoveringits former beauty. Aileen began by clearing out five shipping containers worth of old materials and holding a major sale of furniture in the ballroom.

Though far from stripping the hotel of its soul and revamping it as just another faceless modern hotel, Aileen and her team are committed to reviving the hotel’s original panache and personality. She lists the Victorian style facade, erected for Queen Victoria’s visit to Killarney in 1861, the intricate mosaic and cast iron pillars in the lobby as some of the period features she has cherished restoring so far.

“I am not managing the hotel as General Manager traditionally would,” explains Aileen.

“I am so involved in every aspect, from the interior to the exterior. It’s like a new build, with new ownership too, so we really are starting from scratch.”

“It’s really exciting and the locals are really excited too. We’re booking a lot of local weddings, which is brilliant to see.”

Aileen has already gone a long way to achieving the clear vision owners Ray and Eoin had in mind.

When she arrived just 12 of the 64 bedroom had undergone refurbishment, a figure that has almost tripled during the first 6 months of her management.

Aileen has already shown a flavour of her ambition for the hotel, organising a wedding fair this April. The successful event saw The Ilnacullin Ballroom set up in all its splendour; helping the couples visualise just how striking a venue the Glengarriff gem would be as their wedding reception.

While the ballroom with its balcony overlooking the bay is a natural choice for large celebrations, when finished the Tara Suite, the original function room in the hotel which sat unused for 17 years which, will be a choice location for more intimate gatherings and will accommodate up to 100 guests comfortably.

More low-key occasions such as barbecues can take over the recently refurbished Captains Bar in the East Wing, formerly the ‘non-residents’ bar for locals who didn’t have access to the main part of the hotel.

Most recently, Aileen completed the renovation of the upstairs Garinish restaurant, which takes its name from the nearby island, refreshing both the aesthetics, with crisp white table clothes and stylish grey velvet seating, and the menus. The latter project was the baby of Chef Nick Davey, who has crafted a whole series of new menus, from all day dining to Sunday lunch and vintage afternoon tea, all of which celebrate the best of local produce and West Cork producers from seafood to charcuterie.

Nick joined Aileen and the team in February, and tells me from his very first visit in December he was sold on Eccles.

“Ray invited me down and didn’t tell me too much about it before I arrived. It was very much a work in progress at the time but as soon as you drive down the road and you see the view there’s no going back.”

Nick brings a wealth of talent and experience to Eccles Hotel having worked previously in some of Ireland’s best known hotels and restaurants including Tankardstown House, the Michelin starred Cliff House in Ardmore and the highly regarded Shanahans on the Green in Dublin.

Having worked with chef Rob Krayczyk, son of Frank Krawczyk the Charcutier famed for his prize winning pork sausages from Schull, Nick says he had “been down this neck of the woods” a few times before and was already familiar with the range of artisan producers he would have at his disposal.

On his vision for the food offering at Eccles, the chef says: “to showcase the wonderful food that is on offer down here. Because it’s so fresh, so local and there’s such variety you just need to plate it with the very minimum of fuss to make it taste good.”

“This region is unique in the country as it has such a wide variety of produce in one area. Other counties might be known for a specific produce but you can get everything here.”

He reels off a list with well-known names like Milleen Cheeses, Gubbeen, Paddy O’Donoughue Butchers in Bantry and, of course, Frank Krawczyk, but in time the chef hopes to produce his own charcuterie on-site.

When not feasting on Nick’s food, there’s plenty to do to work up an appetite in between meals. Grab one of the resident guest bikes and explore this stunning area of West Cork, or hop on a ferry to Garinish Island with an opportunity to see one of the largest colonies of harbour seas in Ireland on the way back to the nearby harbour.

Sound like too much hard work? You can choose to relax and unwind in the beautiful surroundings of hotel’s new intimate VOYA treatment room instead.

And when you’ve done all that, you can take a seat on Maureen’s Chair; soak up the views, appreciate the history and start planning your next visit.