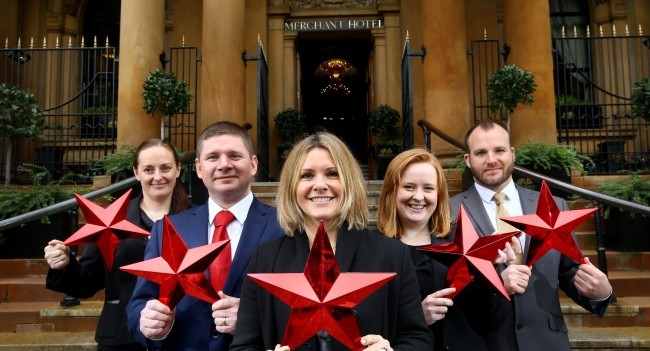 Belfast’s multi award-winning Merchant Hotel is celebrating after the AA upgraded its rating from five black stars to five red stars at the AA Hospitality Awards, making it the first and only hotel in Northern Ireland to receive the esteemed accolade.

Held at Grosvenor House in London on Monday 5th October, the AA Awards recognise outstanding excellence in hospitality and the red star is its most supreme accolade for hotels. Awarded through inspectors’ choice, it is only bestowed to the best hotels in the British Isles that excel in all areas and offer outstanding levels of quality, service and hospitality.

Winners are selected in recognition of excellence and success within their chosen category, having shown a significant improvement in the preceding 12–18 months and proving their dedication to raising industry standards and enhancing both their guest and diner experiences.

The award was presented to The Merchant Hotel’s General Manager Gavin Carroll by BBC’s Fiona Bruce at the ceremony last week.

Commenting on the achievement Gavin Carroll said: “This award is only achieved by hotels that meet the highest international standards and we are thrilled and honoured to receive the first and only AA Five Red Star Award in Northern Ireland. We pride ourselves on our excellent service and facilities and it is a privilege to have this recognised at such a prestigious national award ceremony. I’m extremely proud of all of our staff that have shown such passion and dedication to meet the first-class standards needed in every area of the hotel to achieve the highly coveted award.”

The Merchant Hotel is owned by the Beannchor Group, which boasts a portfolio of over 50 pubs, hotels and restaurants across Northern Ireland. The hotel now joins an elite group of only 50 hotels in the whole of the UK that have achieved the exclusive AA Five Red Star status.