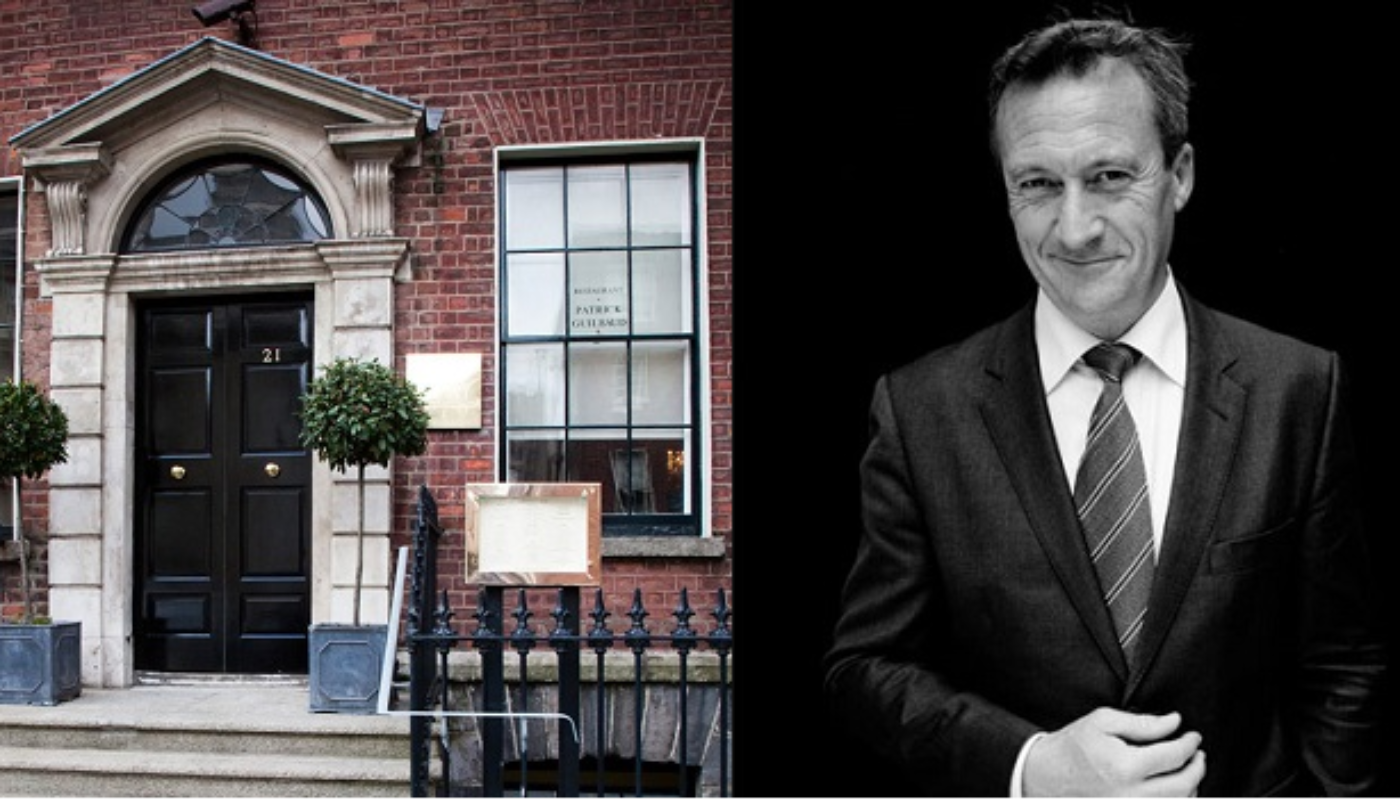 “My father was an entrepreneur, he was a mechanic. As much as I love cars, that was not my dream“, says Stéphane Robin, restaurant manager at Ireland’s only two star Michelin restaurant, Restaurant Patrick Guilbaud. Though Stéphane followed his dream to become a restaurant manager rather than a mechanic, Restaurant Patrick Guilbaud can be likened to a carefully crafted, well oiled, luxury vehicle, and behind the mechanics of this slick, smooth and uncompromising operation is Stéphane. Just as his father maintained cars, Stéphane maintains Michelin stars.

When I met Stéphane at Restaurant Patrick Guilbaud, situated within one the four Georgian townhouses that make up the 5 star Merrion Hotel, he is in full flight orchestrating preparations for the lunchtime service; the ironing of linen tablecloths, the setting the private dining table, greeting in French a nervous young chef that has arrived for an interview.

Born in a small town South of Paris, Stéphane came to Ireland in 1986, aged twenty two, to take up the position of head waiter at Restaurant Patrick Guilbaud. Arriving in Dublin for a six month crash course in English, “London at the time it was so cosmopolitan that I could learn every language except English”, Stéphane recalls being collected at the airport by Patrick Guilbaud himself, in his red Ford Fiesta.

“I was charmed by Ireland but most impressed by Patrick’s ability and passion. I cancelled my contract in London and stayed in Ireland. From that moment it was a great partnership between Patrick, Guillame (Lebrun) who was already in the kitchen, and I, and the three of us just grew, together.”

Stéphane’s love affair with the restaurant world began while working at his uncle’s restaurant, though his father did not approve, “for him a waiter taking plates in his hands was not necessarily a future and I tried to prove him wrong”. It was only then when pictured on the front of the newspaper after finishing at the top of his degree of service class that he achieved his father’s approval, “suddenly he began to understand exactly what I was doing, he began to realise that it was hard work but it was recognised”.

Fresh out of school he landed a job in the pretigious Le Club de Calaviere, St Tropez, and from there polished his skills at three Michelin star restaurants La Gavroche, under the Roux Brothers in London, and La Bonne Auberge, in Antibes on the Riviera. Though when Stéphane arrived at Restaurant Patrick Guilbaud he was not chasing Michelin stars;

“I said gastronomique cooking is enough. Michelin star is an award, but the level of the food, the service, the quality is gastronomique, that’s what it’s about. Anything else is just a little star on your shoulder.”

However, Stéphane does not underestimate the allure of a Michelin star, “Is it good for business? It’s fantastic. Especially when you are in a city like we are. It gives us great exposure”. It makes sense then that the restaurant continues to strive for that elusive third star, though Stéphane insists not at every sacrifice, “every country has it’s own market and a different approach. We also have a business to run, so we cannot alienate our clients”. This dedication to their customers comes after the restaurant faced some tough times,

“I remember after 9/11 when the world stopped and nobody was travelling, the phone was quiet for two weeks. We realised that we were giving a little too much to international clientele. We worried we had spoiled 25 years of loyalty from our clients. Suddenly the phone wouldn’t stop ringing and people used to say ‘now that you might be quiet would you have a table for us?’ It really warmed our hearts and saved our business too.”

Again, when recession struck Stéphane worried that they had taken things for granted. Responding to their diners needs they introduced a fixed price menu, and a surprise menu to keep fresh ingredients moving. “We had to recreate ourselves”, he says. Their strategy worked, and in 2015 Restaurant Guilbaud’s recorded it’s busiest year in it’s 34 year history.

When I mention to Stéphane the remarks of Michelin guide editor Rebecca Burr that the decision process “is all about the food”, surprisingly, this master of service is in agreement, “when you go out it’s for food, first. Secondly, it’s for the experience you are going to get”. “Michelin star restaurants are starting to drop the tablecloths, going back to basics. There is a two star establishment in Paris, L’Atelier by Joel Robuchon, where you sit on high stools and eat on the counter and it’s all about food, and believe me, the food is amazing”. Though, he does humbly concede that his role is a decisive factor for Michelin, “we have long chats with them and if we do something wrong on the front they always tell us”.

Said to visit a restaurant up to ten times over 18-months, one might assume he has become adept at recognising Michelin star inspectors, but he insists this is not the case. “When they come and you do recognise him, he is not looking at what you do for him, he is going to look at what you do in the room and how you look after your clients”, he says. “At the beginning I used to ask ‘are you enjoying your meal?’, and they would say ‘why do you ask, I can’t really tell you!”, he adds with a chuckle. Though usually giving little away, Stéphane says Michelin has evolved, “we had one (inspector) about a year ago and I was amazed to see that on twitter he put a picture of a dessert and made a comment saying ‘how beautiful was that dessert’”.

Whether it’s a Michelin inspector or a first time diner, Stéphane is dedicated to providing the best possible dining experience. To reach these standards he briefs the front of house staff twice a day to know exactly what is on the plate, learning from his own past mistakes, “I had a professional, a big name chef, who asked me about where halibut came from, and I said ‘the Irish Sea of course’. Of course not! He said ‘Stéphane, I don’t think so. Go and talk to Guillame’“. Training such as this is part of the culture at the restaurant, which changes it’s front of house staff every year, acting as a ‘trampoline’ for young waiters. “When they get their degree they are full of hope to succeed, to get my place so I try to bring them up to my level“.

His role as a mentor is something that has been ingrained in Stéphane from his own rise through the ranks, “you never forget a good master. I worked with some fantastic restaurant directors, who were so sharp and knowledgeable but modest too, it’s not about you it’s about the client”. This humility is a feature that Stéphane too absorbed, when questioned on his recent recognition as Best Restaurant Manager of the Year Dublin in the 2015 RAI awards he deflects the praise, “I train my team and they make me look good“.

Like oil to an engine, the relationship between the kitchen and front of house is essential to the smooth running of a restaurant. Stéphane describes his relationship with Patrick as ‘a good marriage’, though it’s not without it’s marital squabbles. “At the beginning Patrick said to me ‘how come we always argue?’, and I said because perfection doesn’t exist. We will always work at it and we are also trying to come close“, Stéphane says. “I know Patrick and Guillame almost better than my closest friends and my family”, he adds.

In 2016, Restaurant Patrick Guilbaud will continue to chase perfection, aiming to excite every diner, “we have a lot on our plate this year. We are going to do a full renovation for the third time in 19 years. We are going to change a lot of things cosmetically, but also add a little extension and put back the kitchen where it was before. We are going to surprise our clientele because there are a lot of things coming”. Despite the rise in casual dining Stéphane is confident about the future of the restaurant,

“sometimes I look at the tables and I know over 90% of the tables will be celebrating an anniversary, a birthday, a degree, something meaningful for them. This is not just our place anymore, it’s Dublin’s place”.

Like his father before him, Stéphane has mastered synchronising quality, efficiency and beauty, replacing parts before a problem is ever observed. The result every time is an impeccable dining experience; “My father was a very gifted man, it’s like any trade, when it’s done properly it’s beautiful”.