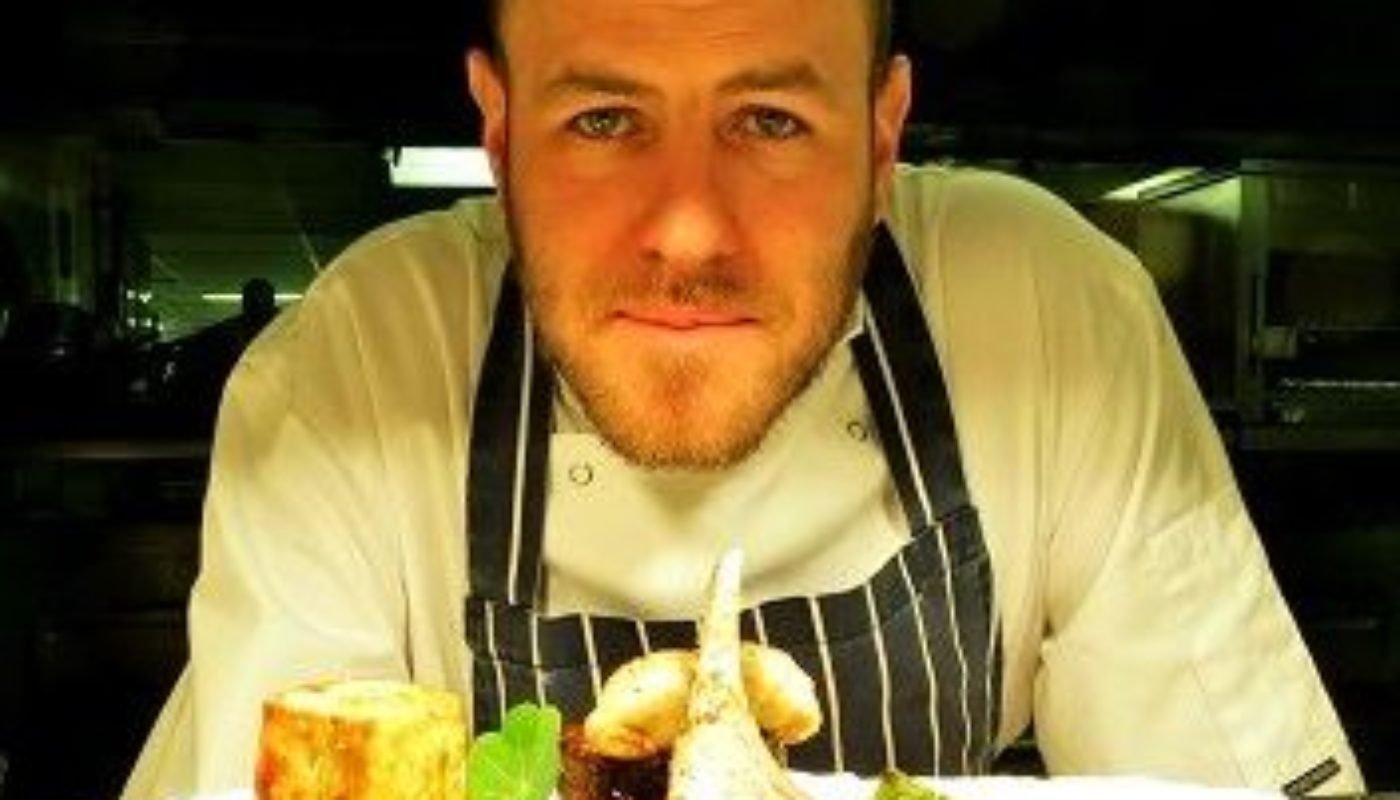 “There is nothing which has yet been contrived by man, by which so much happiness is produced as by a good tavern”, wrote Samuel Johnson, and Tavern Restaurant at dylan Hotel, with its whimsical desserts and stylish surroundings, has been the backdrop for many a happy memory. This is particularly true for head chef Mark Bodie, who laughs recalling how Tavern was a favourite date night spot of his long before he took over the kitchen – “I used to eat there every weekend, religiously!” he laughs.

Nowadays he can be found in the basement kitchen experimenting with new concepts and dishes, with the odd 27 kg Easter egg creation thrown in to keep things exciting. The most refreshing part? Speaking to Mark it is clear that he genuinely finds his work exhilarating and exciting, not keen to rest on his laurels but constantly looking to expand his repertoire, all the while keeping things light hearted and fun. However, while he describes the kitchen as ‘his natural habitat’ now, Mark never intended to don chef whites growing up.

I never wanted to be a chef…never! I fell into this trade, I’ll be very honest with you, I wanted to be a carpenter like my dad, I loved the craftsmanship that went into make something unique and beautiful, treating it with respect, I guess the same way I would with food now.

Taking a summer job as a food runner in a Naas restaurant at the tender age of 16, the Clondalkin native’s eyes were opened to the allure of the kitchen, antagonising the head chef for kicks, eventually winning him over to become his protegé of sorts and learning the ropes as a reluctant chef at first. Reminiscing, Mark tells me “I used to annoy the guts out of him but he offered me a job – I think he wanted to punish me! I took the challenge, gave it a try and absolutely fell in love with it.”

It was a quick ascent onwards and upwards from there, with Mark getting his first taste of the world of haute cuisine in Pearl Brasserie, initially on a college placement. This experience led Mark to Derry Clarke’s L’Ecrivain as chef de partie under Stephen Gibson, in the heart of the boom times when they were ‘out the door every day.’ Mark’s year and a half in a Michelin star property, opened his eyes to a different style of cooking, “classical French, with lightness and modern touches.”

Mark’s return to Pearl Brasserie after L’Ecrivain saw him take the role of Head Chef at just 23 – no mean feat and a testament to the skills of a man who will play down his vast talents if pressed. Humbly, he admits “I was young but when the opportunity arose I grabbed it and I didn’t look back.” Pearl, as he affectionately calls it, remains dear to his heart and he can often be found there dining with his seven year old son, perhaps looking to inspire the next generation at the scene of his own big break.

Shining bright at Pearl also caught the eye of Grainne Ross, a regular at the Merrion Street favourite and the Managing Director of dylan. “She got in contact and said they were looking to shake up their style of cooking. It seemed like the perfect fit because they wanted modern techniques based on the classics, really light, really healthy with loads of seafood, so that is how I got dragged to dylan!” he says cheekily. Needing a chef who could create contemporary dishes to echo the uber modern art deco interior of dylan, Mark’s delicate touch made him an instant favourite.

Mark now feels at home in the stylish D4 abode, pleased he took the leap, despite having never run a hotel kitchen prior to Tavern. Noting that it was an exciting challenge for him, launching a whole new restaurant concept had the entire team at dylan buzzing and he credits Director of Operations Oscar Navarro and General Manager Barry Francis for making the transition smooth as possible with expert training and support at every turn, likening the team at dylan to family.

Having spoken to many a chef who swore they couldn’t find the time to eat out or leave the kitchen long enough to take a holiday, Mark’s approach to the work-life balance is refreshing. “Everyone can make time, if you want to,” he believes. “I look after a kid and I do sixty odd hours a week, whatever has to be done, I still make time to go on holidays. I’m taking four weeks off this year, it’s been planned a year in advance but I can make time for that.” Mark’s implicit belief in his team and the personal investment he has made in his chefs means he has no fear of stepping away from the stove to recharge his batteries. “I am leaving my kitchen with perfectly trained guys who I know are going to run it for me and the front of house always lend support, we’ve got trust and that is key,” he says.

That said, Mark plans his adventures around his passion, so his travel goals are always the same – seeking out and enjoying the exciting dishes fantastic restaurants around the globe have to offer and taking all he can inspiration-wise. “For any chef, I think the single most important thing is to eat out. That’s where you start to realise how great things can be without having ten different things on a plate and simplicity – that is a big thing in my eyes. I travel 3 or 4 times a year just for restaurants.”

If a good palate really is a well traveled palate then Mark’s taste buds must be the creme de la creme, having eaten his way around some of the world’s finest restaurants, including world number one Eleven Madison Park on a solo research trip he took to the Big Apple last year. Of the ‘World’s Best Restaurant’ Mark says it was up there with his best meals to date, but preferred the former heavyweight, Thomas Keller’s 2 star Per Se, naming it “the best meal of his life,” a delicious education of sorts.

Having eaten his way around Burgundy, Monaco and Madrid, in one, two and three star venues, Mark has been gleaning inspiration from the likes of Diver XO and Kabuki, keeping ahead of the trend and sharing his enlightenment with his chefs at Tavern. “I try to take as much from it as I can, everyone has new techniques and ideas, if there’s anything we can take away from it then I bring it home with me. If you can do it, great, if you can’t, leave it to the other guys!” he smiles. His adventures and the bright spark moments they have inspired are written all over the menu at Tavern and the packed schedule of culinary exploration he has planned for the next year means it set to go up a notch once again. An invitation to dine at Oslo’s two star Maaemo, a trip to three star Vendome in Cologne to soak up the sorcery of three Michelin star holder Joachim Wissle and a pilgrimage to food mecca San Sebastian all await Mark in the coming year.

Here at home, to ensure he is constantly learning, Mark ups his game particularly in pastry as he doesn’t employ a pastry chef, with dedicated intensive stints with the finest chocolatiers. Just back from two days training with master chocolatiers Callebaut, he has lined up a four day masterclass in Cocoa Atelier’s kitchen as his next training mission. Such dedication to expanding his repertoire has resulted in dishes like his Fairground for Two, a nostalgic homage to childhood treats from candy floss to toffee apple doughnuts and reflecting the breadth of Mark’s magical creativity. There is no such thing as a blue Monday in the Tavern kitchen, as with the restaurant closed Mark encourages his chefs to play around and have ‘a chocolate day’, dreaming up new dishes and toying with ideas. Passionate about sharing each new skill he acquires he says “if you even try to make a small impact that counts, it is key for me to go away and get those days of training and bring back what I learn. Then the guys are able to do it and in two months time we can put the dish on the menu – every day is a school day.”

Despite his ever-expanding patisserie expertise, reflected in his whimsical Fairground dessert and dylans signature Valrhona Chocolate Melting Sphere Mark’s own favourite chocolatey treat is a little less intricate…”I love a Twix bar dunked in a cup of tea, I’m one of those nasty people who bites both ends and uses it as a straw!” he admits, laughing wholeheartedly. As seriously accomplished as his culinary creations are, Mark doesn’t take himself too seriously and is slow to step into the spotlight, as I learned when I once tried to arrange an audience with him after a fantastic dinner at dylan. “I like being in my own environment, in the kitchen, forgotten about and just doing what I like to do!” he confirms.

While he shies away from acclaim and plays down his talents humbly, one look at his plated masterpieces will have you thinking there is magic in Mark’s creations, and one bite will confirm it. Easy going and jovial as Mark is, his food is no joke – he is Tavern’s trump card.