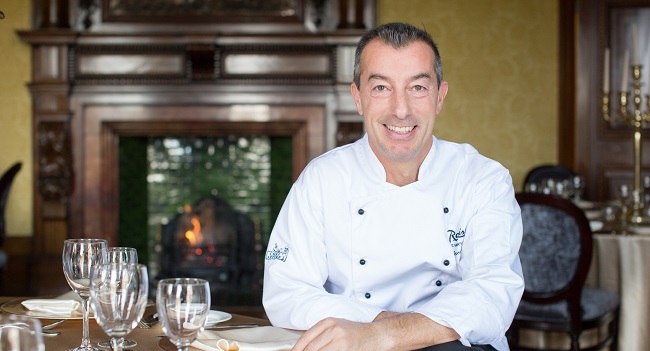 The stunning building that is home to the Radisson Blu St. Helen’s Hotel is an official national landmark. The house was built in 1750 and the preserved architecture of the rooms is a testament to the effort and care that has gone into maintaining it. The opulent five star hotel plays host to countless weddings and events throughout the year, all of which are presided over by Executive Chef Udo Wittmann.

Udo’s right hand man is Executive Sous Chef Giancarlo Anselmi who assists with these functions but primarily looks after the award winning Talavera restaurant. Giancarlo has been running the authentic Italian restaurant since the hotel opened in 1998, a long time for any chef to remain in one place. He argues that because he opened it, he can claim ownership. “Because this was like my creation, my baby, it suited me. I just live around the corner and then it became like my house. It’s like home so that’s why I’m still here after so long.”

His autonomy is absolute as Giancarlo has complete freedom in the running of the restaurant. General Manager Neil Lane doesn’t interfere with proceedings. “It is nice because he doesn’t even look at us you know, he trusts whatever we do so we can do what we want; whatever dish we want to put on, we’ll do it.” Another reason that has kept Giancarlo at the Radisson is the constant influx of ‘new blood’. Big hotels usually have a fairly high staff turnover and this one is no exception as the restaurant is constantly getting new chefs in from Italy. They come to learn English and Giancarlo always offers the same advice, find a nice Irish girl, like he did. Giancarlo enjoys the refreshing attitudes that are continually entering his kitchen and the endless sources of energy and inspiration as the new chefs bring with them a wealth of local and regional specialities that motivate the team and occasionally end up as a special.

“When somebody comes on board you know there’s always something that you can take from any one of them. Even though they might be young, it’s because of this diversity that we have in Italy. The guys come in and you know when we eat we say ok, you do something from your place or we’ll do something from yours… So we always have something nice and new.” The front of house team often add to the mix too with Restaurant Manager Alfredo and Assistant Manager Alessandra offering to cook the team their hometown favourites from Rome and Pescara.

The focus on regional cuisine in Talavera is intentional as Giancarlo is adamant that there is no such thing as ‘Italian’ food, that it is all specific to smaller areas. “Italy was divided up 250 years ago. There was little states, little city states, little republics like Venezia, Genova, Naples. So there is regional cuisine, even from my valley up in the Alps to the other valleys it’s different. So we try to cover a bit and a bit.” Trying to source unusual regional ingredients might be a problem for other Italian restaurants in Ireland but the buying power of a luxury five star hotel has its advantages. Giancarlo says they are blessed with good suppliers who can find him anything he asks for, even if that something is a really expensive thousand year old cheese from Piedmont called Castelmagno. “Castelmagno is very famous but you cannot find it, not even in Italy in the normal shop, you have to go into the specialised shop so this is something.”

Another thing Giancarlo likes to highlight is wines from the varying regions. When they host a regional spotlight in Talavera, the team will select a range of matching wines from that region to pair with the food. This is Giancarlo’s way of moving people away from the usual suspects of Pinot and Shiraz and on to grape varieties they may never have heard of. “This is the interesting thing, Italy is one of the biggest producers of wine but on top of that the variety of the grapes is huge, we’re talking about 300/350 native grapes which is a lot. In Italy, everywhere you go is different so we are trying to do this, a few dishes and a few wines in the same region. We are lucky we can do that.”

Being the only restaurant in a five star hotel means the menu isn’t exclusively Italian region orientated. The team have to cater to their international clientele with staples like steak and fresh fish but Giancarlo says it is a good compromise in order to be able to have his ‘corner of Italy’ in the Radisson.

Giancarlo’s real corner of Italy is a little ski resort on top of Lake Como in the Lombardi region and he goes back every chance he gets, usually in January or February when the hotel is quieter. His family had a small hotel near Bellagio so Giancarlo grew up surrounded by food. “Of course I helped there, I lived my life there. I remember doing my homework in the kitchen, always. My grandmother used to make everything. I remember gnocchi, she was always there making gnocchi or pasta.” Heading into the family trade, Giancarlo graduated from the San Pellegrino Hotel School, which can be seen on the label of the bottled water brand. He did his apprenticeship in Switzerland in St. Moritz and worked for a time in Porto Fino before moving to London.

Giancarlo was cooking authentic Italian cuisine in the restaurant of the Hyde Park Hotel, now the Mandarin Oriental. The Forte family spared no expense in establishing the standards for the restaurant and Giancarlo recalls some unique training. “They got a famous pastry chef from Cipriani in Venezia, Cipriani is famous, and they brought him over to teach us the traditional Venetian desserts; it was great. It was a great time in London, I’d go back anytime except I have to be here; my wife wouldn’t let me go.”

Giancarlo met his wife Jane while working in London and after some travelling and a stint in Milan where Giancarlo opened his own restaurant and Jane was working as a fashion designer, the couple settled in Ireland. “I think the quality of life is very good here, the only thing we are missing is the sun. Well I miss more than the sun but sometimes it’s tough, especially this winter.”

Going back to Italy as often as he can to remedy the lack sunshine here, Giancarlo can keep in touch with the food scene in the country. He says the internet helps as now he doesn’t have to keep buying magazines. He likes Twitter for up to date news. “I’m on Twitter because it’s fast, I’m having breakfast and in half an hour I know already if there is something, you follow the major colleagues down in Italy and around the world.” Something he’s not too sure about is the democratisation of opinion that exists on the internet where everybody can blog or tweet their opinions. “I don’t know if they’re good or bad but you know a thousand mouths, thousand voices, you never know which one is telling, not the truth, but the right opinion. Taste is so different, my taste is so different to your taste.”

Catering for everyone’s differing tastes at the same time must be challenging for Giancarlo with guests looking for standard Irish fare and locals coming in for an authentic Italian experience. He admits it is difficult in Ireland, pleasing everyone and trying to challenge preconceptions about Italian food at the same time. “That’s the difference I found when I came here between London and Dublin. In London everybody was more open. Here, I don’t know. It is better now but still, especially with the old crowd…”

The attitude to Giancarlo’s food is improving as younger generations start frequenting the hotel, attracted by their stunning glass bar and programme of summer events. This year the hotel has invested in new outdoor furniture and a large barbeque area to cater for the summer activities. The restaurant also got some attention with their new Garden Room and patio being built on the rear, looking out over the grounds.

With new aspects to the restaurant and fresh blood coming into the kitchen, there is lots happening to keep Giancarlo motivated and inspired for the next chapter of his tenure at the Radisson.

Bringing Balance to The Brasseri… 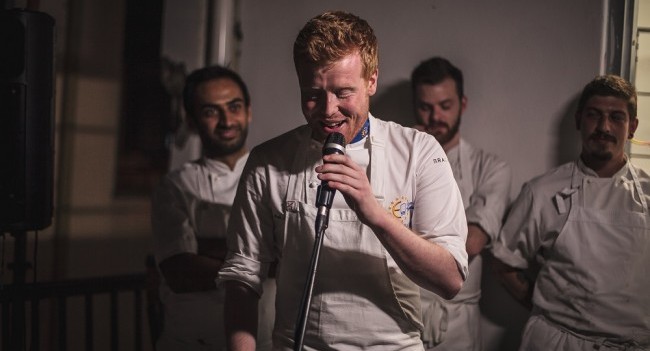 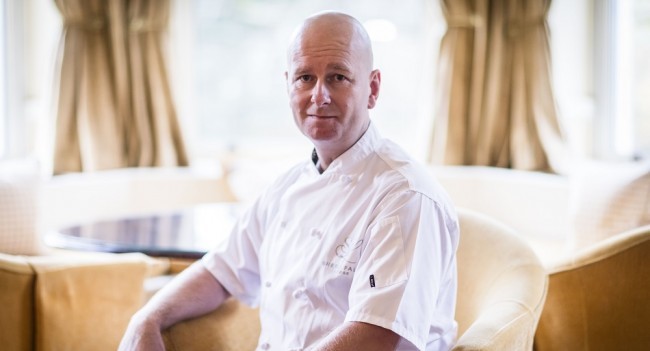 Fabulous Food at the Falls – Phi…