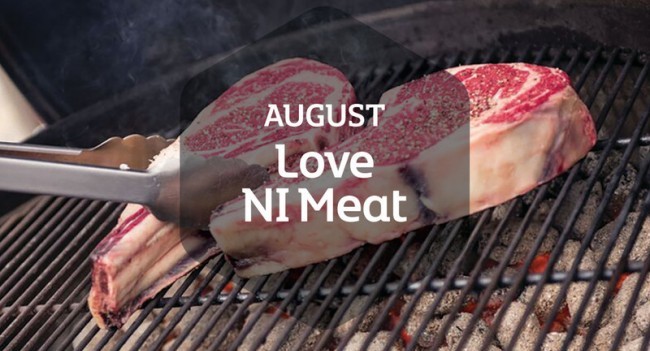 Meat. It’s mighty sweet in Northern Ireland, so it’s little wonder we love to eat a range of meaty products that can easily hold their place among the best in the world.

For the choicest cuts, look no further than our specialist farmers, artisan producers and elite food processors.

One of the best places in Northern Ireland to go for a meat feast is Moira, County Down. It’s two for one here, as the village is the home of a pair of supreme meat men.

McCartney’s butcher and fine deli has won every major sausage competition in the UK, and has also lifted the Great Taste Supreme Champion award for their hand made corned beef.

Up the street, the doors of the Meat Merchant shop open onto a treasure trove of beef, pork and lamb which has netted a string of international awards, including that Great Taste Supreme Champion title.

The Meat Merchant is Peter Hannan, famous for ageing Glenarm shorthorn beef and lamb in his unique Himalayan salt chamber.

This is must-taste meat is eagerly sought after by celebrity chefs, sold in top retailers such as Fortnum and Mason’s and served in leading Northern Ireland restaurants and hotels like the Poacher’s Pocket and The Merchant.

From Field To Fork

The traditional beef breeds of Dexter and Angus enjoy a natural life on the shores of Strangford Lough. The result is beef the way it should taste from field to fork producers, Black Beef. Pick some up direct from the farm or through their online beef box scheme.

For other direct lines from farm to customer, look in on Forthill Farm in County Armagh for free range pork and beef, or County Antrim butcher McMaster’s Homefarm Meats for meat as fresh as it can be.

Alternatively, try Broughgammon Farm, which is all about delicious cuts of kid goat meat, free range rose veal and seasonal wild game. Buy it from their onsite artisan butchery, website or local markets.

Northern Ireland has a meaty reputation when it comes to venison too. Baronscourt Estate venison, reared at the foot of the Sperrins in Tyrone, is on the menu at the Culloden or any Hastings Hotel.

Finnebrogue venison appears on high-end restaurant menus across the UK, Ireland and Europe. But thank goodness this Downpatrick raised meat, as well as Finnebrogue’s organic pork sausages, are also available in local supermarkets.

With a wide and tasty choice, local artisan bacon and sausage delicacies make the mouth water.

The dry cure bacon from family-run businesses Kennedy’s in Tyrone and Sloan’s in Londonderry is delightful in quiches, sandwiches, and not forgetting the Ulster Fry.

Fermanagh Black Bacon is an equally fine thing. Produced by O’Doherty’s Fine Meats, they say you shouldn’t leave the county without calling into the shop on Enniskillen’s main street.

And for champion sausages look no further than craft butchers like O’Kane Meats in Claudy or ClogherValley Meats. Like most Northern Ireland butchers, they work closely with local farmers before adding their own spices and flavourings to create sausages to die for.

When it comes to poultry meat, Moy Park is among the favourite brands giving us great taste, but artisan producers also offer premium flavoured chicken, turkey, geese and duck direct from the farm.

At Hillstown Farm Shop the poultry is always free range and slow growing, as it is at Marlfield Farm, where chickens, turkeys and geese can be bought all year round.

And there’s the famous Buchanan’s Turkeys. This bird is not just for Christmas though. Tasty and low-fat, it’s great all year round and delicious in curries and stir-fries.

For more Northern Irish food and travel inspiration discovernorthernireland.com for even more great recipes, or join the conversation online with #EnjoyNI16.