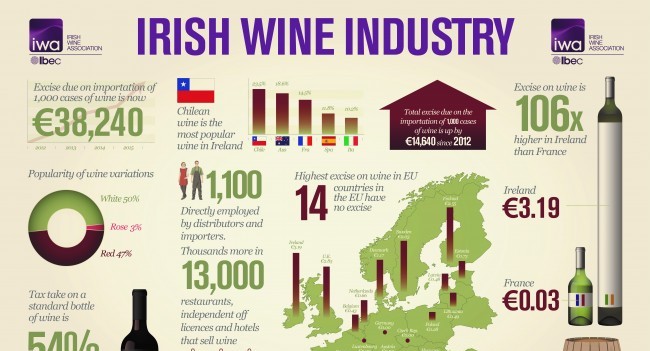 Monday, 31st August – The Irish Wine Association has today released its annual Irish Wine Market review, which calls on the Government to reverse excise on alcohol in the next Budget. There has been a 62% increase in excise since 2012. This, the industry says, has put jobs at risk and has made it impossible to scale up and take on new talent.

Tax take on a standard bottle of wine is now over 50%. Irish wine excise is the highest in the EU and 14 countries pay no excise on wine. Excise on wine is now 106 times higher in Ireland than France. Spanish tourists pay almost twice the price for wine in Irish restaurants that they do at home.

“Excise is the number one threat to the Irish wine industry. Draconian excise hikes have meant that since 2011 the tax take from a standard €9 bottle of wine has increased from 39% to 54%. This impacts on the cash flow of Irish wine importers and distributors, as many have to pay excise as an up-front cost. The vast majority of these jobs are in small, family-operated businesses across Ireland, making it difficult to take on new talent. The message coming from the industry is clear: reverse excise increases and support thousands of small businesses and jobs across the industry”

The report outlines the popularity of wine variations, with 50% of wine drinkers choosing white, 47% choosing red and 3% choosing Rose. Chile has overtaken Australia as the No 1 country of origin with France, Spain & Italy retaining their 3rd, 4th & 5th positions.

“The Support Your Local campaign is calling for excise tax on alcohol to be cut, stating that these taxes are damaging competitiveness and costing jobs. Today’s report confirms that excise is preventing SME’s from investing in their businesses, due to cash-flow constraints. NOffLA carried out a survey of our members earlier this year which found that if excise duty is increased again in the next Budget, 51% of independent off-licences will struggle to remain open, while 44% will be obliged to reduce staff by at least one member. Conversely, if the excise increases were reversed, 70% would hire one or more extra staff and 42% would increase staff pay.”