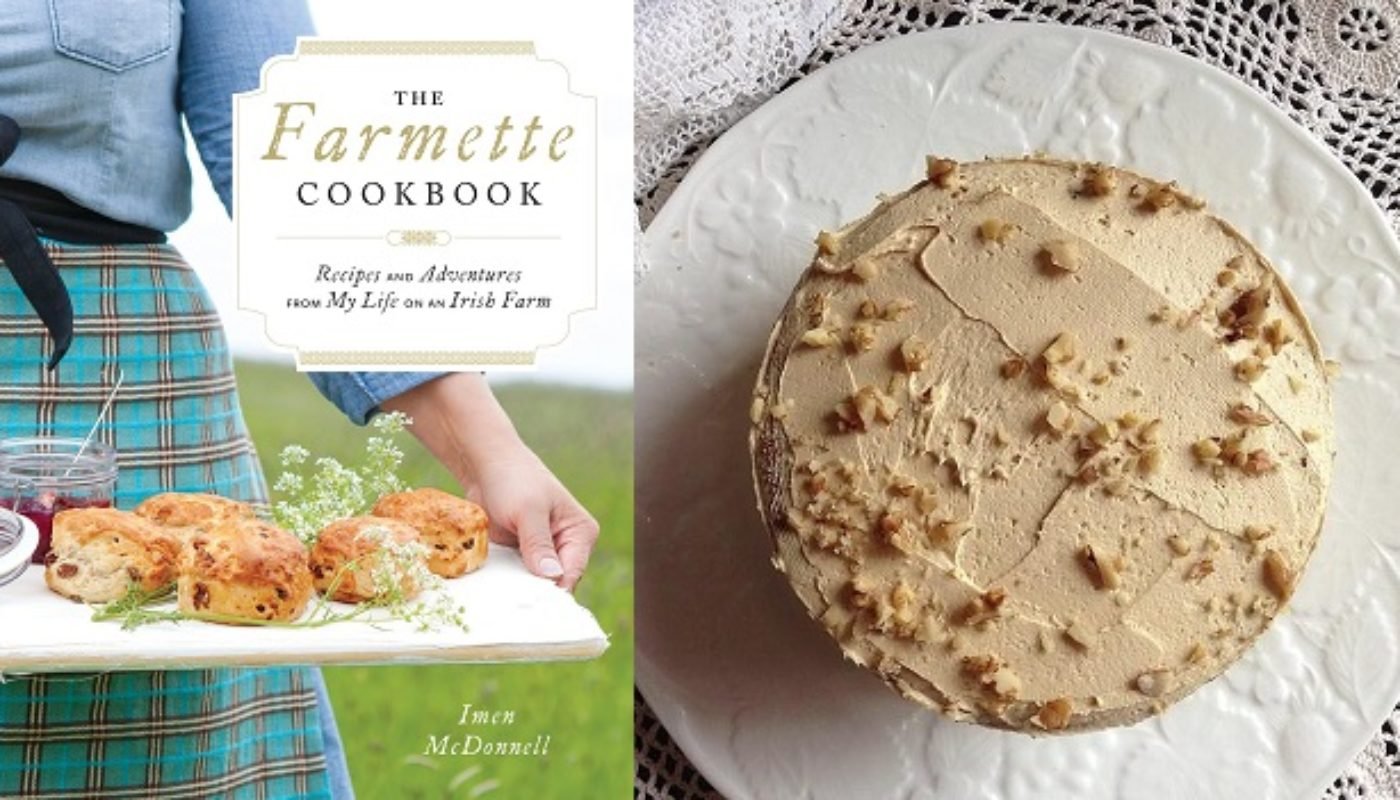 In The Farmette Cookbook: Recipes and Adventures from my Life on an Irish Farm, Imen McDonnell charts her journey from working as a media executive in Los Angeles and New York to meeting husband to be Richard and moving to live on his family farm in rural Ireland. Along the way she speaks honestly about the difficulties she faced exchanging her cosmopolitan lifestyle for a life working on a busy dairy farm.

In the introduction to the book she admits that in the beginning, part of her believed that at some point she and Richard would return to the States to build their lives there, but she soon realised that an Irish farmer would never leave their land and livestock. Once her son Geoffrey was born she knew that Ireland was now her home.

Cooking and baking helped cure her homesickness. She started gathering recipes from her mother in law and, as a way of easing herself into her new life, she cooked and photographed the food she made and wrote about her experiences on her blog at farmette.ie. Falling in love with the Irish countryside, she took to foraging the hedgerows for berries which she then turned into tasty dishes for her family. She soon found that cooking and baking helped her to make new friends and that people were always eager to drop by her kitchen to sample her food.

In many ways Imen McDonnell sees Ireland through the eyes of an outsider who has embraced her new life with enthusiasm and as such, the book has an honesty and authenticity about it. Beautifully photographed and styled throughout, it reads like the culinary embodiment of a John Hinde postcard, but this is not to suggest that Ireland or its food is presented in a twee or clichéd way. Instead you can really sense the love McDonnell feels for her new home and the food that is produced here.

Containing 12 chapters, the book is structured around both ingredients and specific family meals and occasions. One chapter that specifically caught my eye was the one on Traditional Dairy Skills which contains recipes for Butter, Cream Cheese and Yoghurt amongst many others, and I can’t wait to try making my own Clotted Cream which looks relatively easy to achieve.

I also liked the trio of chapters on Country Suppers, Sunday Lunch and New Traditions which really showcased how family and friends were at the heart of all the food that McDonnell produces.

I’ve long been a fan of Imen’s blog so was looking forward to the release of this, her first cookbook, and I was not disappointed. This is a beautiful book which contains some stonking great recipes which are easy to cook using everyday ingredients. I decided to road test some of the recipes and was very impressed by the results. With over 150 to choose from I was spoilt for choice but decided to start with something simple – her recipe for Scones.

Using only a few ingredients: flour, baking powder, sugar, salt and double cream, this was quite different from the recipe that I normally use. The method was also unusual in that the dry ingredients were merely weighed out and then the cream was stirred in. I have to admit that after mixing up the dough, which seemed quite dry, I wasn’t expecting great results so I was thrilled with the wonderfully light and fluffy scones that emerged from the oven. Split whilst still warm and lathered in butter, raspberry jam and (ahem) a large blob of whipped cream, they were delicious. I loved them. The scones were mixed and out of the oven, ready to eat in under 25 minutes. I was impressed. Convinced that nothing could beat my recipe for Tea Brack, I then decided to try McDonnell’s version. With a slight curmudgeonly attitude I was half hoping that this recipe would not result in a brack that was as good as mine, but yet again I was proven wrong. Packed full of dried fruit which was evenly distributed throughout the finished brack, this was a bread-like cake that was moist and full of flavour. Again it was incredibly quick and easy to make using ingredients that are readily available.

Presented in an accessible format giving both metric and American cup measurements, the recipes are easy to follow and in the main no specialist or unusual equipment is required. I found this no nonsense approach very appealing. McDonnell has a reassuring style, similar to Delia Smith or Darina Allen that would imbue even the most inexperienced cook with confidence, resulting in a cookbook that will be used rather than sitting on a bookshelf gathering dust.

The next recipe I tried was the Roasted Pear Cheesecake. Although this was more complex than the earlier recipes that I had road tested it resulted in a cheesecake that was deliciously rich and creamy, packed full of the flavours of sweet roasted pears and spicy ginger. I absolutely loved it, as did all my family who wolfed it down. Again the instructions were laid out in an easy to follow fashion. I was intrigued by the recipe for Bangers & Mash as the gravy was made using Irish stout, which sounded like an interesting addition so I decided to give it a go! Unsurprisingly, given how the earlier recipes had turned out, this was another great success. The stout worked incredibly well against the sweetness of the onions in the gravy and contrasted nicely with the fresh spring onions in the mashed potatoes. I have cooked this recipe a number of times since and each time it has been a huge hit and a perfect example of how humble ingredients can be elevated to something truly delicious with a little care and attention.

Finally, I made the Coffee Walnut Cake and this was the first time that I veered slightly from the recipe, baking the cake in three 6″ sandwich tins rather than the two 8″ tins specified. I loved the inclusion of ground walnuts in the sponge which gave extra texture and a nutty toastiness to the final cake. This was hands down the very best Coffee Walnut Cake that I have ever made or eaten and I would buy the book for this recipe alone. Again, it was simple to make with well balanced flavours and it looked absolutely stunning.

In the introduction to the book McDonnell states that she “wasn’t exactly the kind of girl who dreamed of country living” but with the release of this book she proves the extent to which she has embraced her new life. The book is an absolute joy to read, the recipes are delicious and I know that it is a book that I will use time and time again.

The Farmette Cookbook: Recipes and Adventures from my Life on an Irish Farm by Imen McDonnell was published by Roost Books on March 8th.

Read our interview with Imen here. 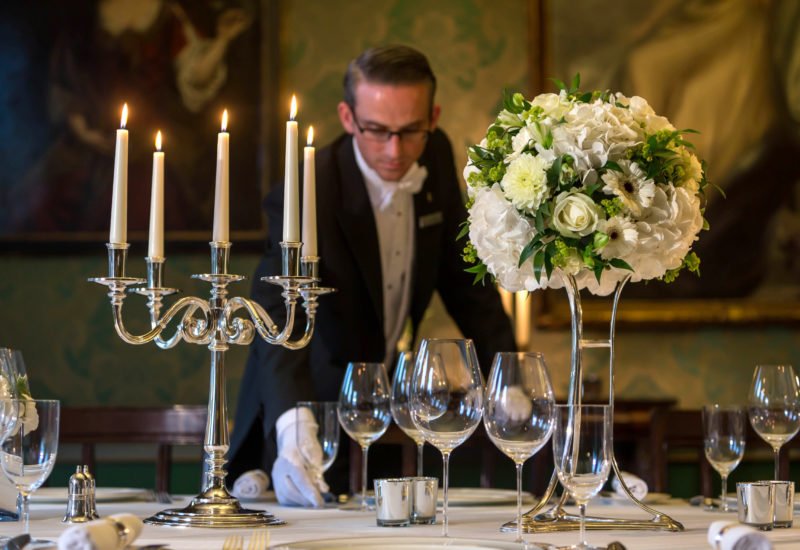