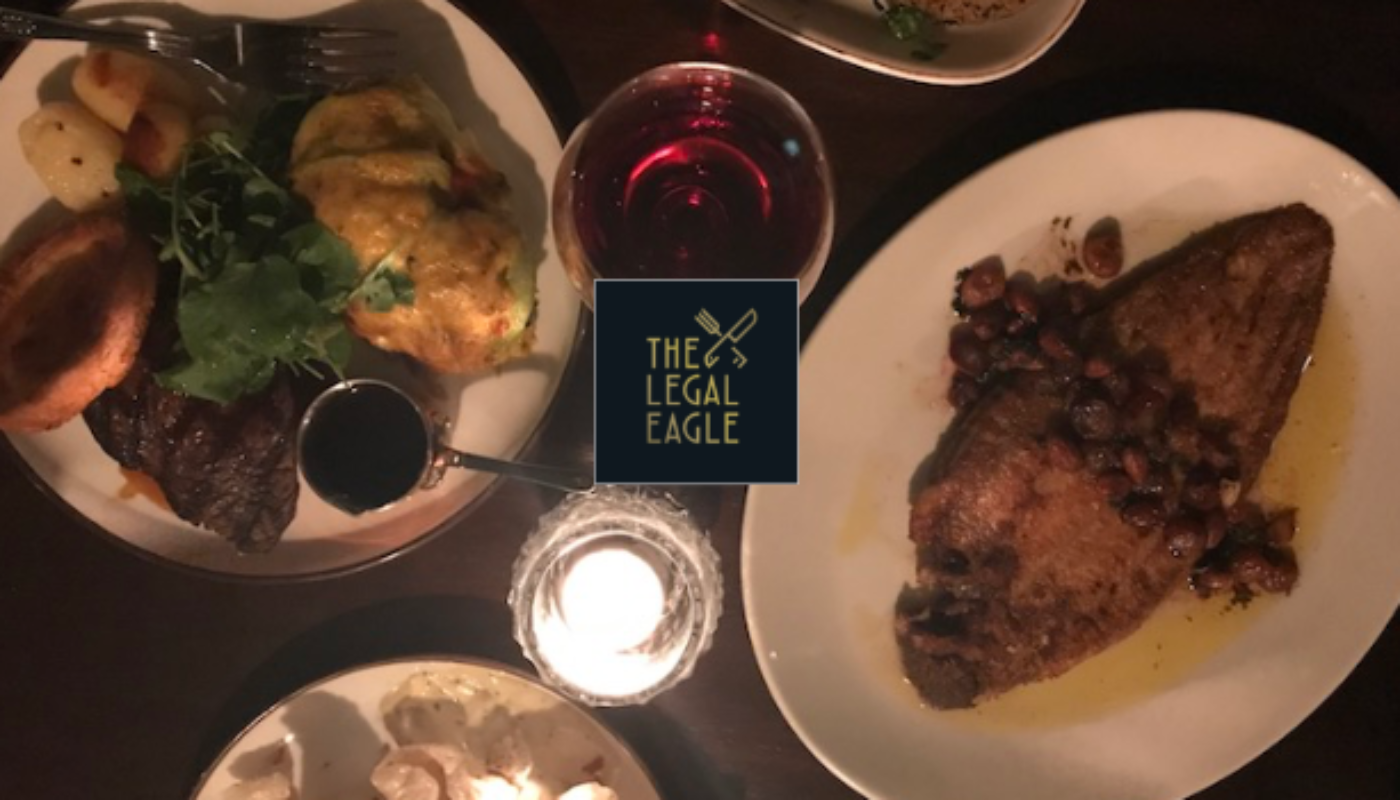 Elaine Murphy is seen as quite a trailblazer along the Dublin Quayside, along with her business partner Brian Montague they have managed to redevelop a handful of Dublin’s eclectic listed buildings into some of the most popular restaurants in the city, serving modern Irish cuisine in comfortable yet contemporary settings.

The Wollen Mills, Winding Stairs, and The Yarn are a trio of Northside venues that tourists and locals flock to. Now the daring duo have added another feather to their cap in the form of an ambitious rebuild on the quays with The Legal Eagle on Chancery Place.

Sat next to the Four Courts it’s easy to see the potential The Legal Eagle has in an area crying out for a venue that can be more than just a “Gastro” Bar. With the success of nearby L.Mulligan Grocers it makes total sense that Murphy has gone with retro old English pub dishes, with a sprinkling of unique Irish innovation. Expect bites like pickled eggs, homemade crisps in batch loaf with “too much butter”, Irish Meat Platters with Pig’s on the Green homemade haslet, Hay smoked ham, Tom Durkan’s spiced beef and Kate Mac’s Irish pastrami. Murphy is well known for her passionate support for local Irish produce and there is plenty of evidence of this dotted throughout the busy room.

As it was opening night we are expecting a few jitters here and there but from a punter’s point of view the evening couldn’t have gone any smoother.

Murphy has positioned many of her experienced staff from some of the other venues out front and we had mixed feelings when we saw the new restaurant manager was Bronwyn Bailey. Delighted as we were to see Bronwyn we will sorely miss her from our local The Washerwoman were she steered a steady ship and was a more than capable front of house.

The venue itself is very much a bar first and foremost, with monthly rotational craft beer on tap in additional to a few well known regulars such as White Hag, Five Lamps Brewing and of course Guinness should you wish to enjoy a creamy pint of the black stuff with your Hartys Oysters.

What impressed us the most however is the wine list, and a serious wine list at that. Designed by sommelier Sean Gargano, we were blown away by the 200 wines listed as we perused the lengthy menu.

As with their other venues, the by the glass options are well curated and well priced from €6.50 upwards, even the wine list doesn’t escape the Irish connection with Wicklow based Móinier Strawberry wine available at €9 by the glass.

We began our Legal Eagle feast as any decent pub goer should with a bag of homemade crisps with bacon dust and paprika, we opted for an unapologetic bottle of 2014 Domaine Marcel Deis Pinot Noir instead of a pint and didn’t look back. We predict one of the Legal Eagle’s most popular bites to be the Pork Scratchings with Oyster Mayo, which were moreishly good and highly addictive. Murphy indicated early on the menu would have many nods to very traditional old English – pub grub and our first starter of twice baked Shropshire Blue Soufflé (€12) certainly reflected that, densely flavoured yet deliciously textured, this sexy melt in the mouth creation was paired with an inventive pecan crusted pear with a croquette like finish and a simple apple puree.

It is worth noting that these “starter” dishes could easily act as a main due to the generous pub size portions, throw in one of their creative sides such as the Panko crumbed salsify and you’re done. On the other side of the table an impressive plate of smoked and braised Veal Heart Croquettes (€15) arrived, three plump golden nuggets filled with the most succulent meat which had been cooked low and slow retaining all the flavour and moisture of this old school classic, like summer meeting autumn against the crisp light crunch. All topped off with a fried duck egg oozing a sea of golden yolk. We were here to sample as much of the menu as we could muster so were intrigued by the Slip Sole (€22) as you don’t often see it on Irish menus, think of Sole Meunière’s cheeky younger sister and you’ve hit the nail on the head. Brown butter, smoked almonds and grapes formed the perfect partner for this pan fried divine morsel, severed with a robust side of “herby spuds”. The Rabbit, Bacon and Cider pie almost made the cut but who can resist a Rump of Lambay Island Beef (€25) again well priced for a city centre location. This is one of those dishes that should come with a parental warning because it is not for the faint hearted. This to us sums up The Legal Eagle in one plate – genuine, heartfelt fare.

A fine medium to rare rump, crispy Yorkshire pudding, roasted spuds and an other worldly Cauliflower rarebit, think you don’t like cauli, think again as this is unadulterated cheesy joy. For the purpose of the review we challenged ourselves to sample at least one dessert, true to the retro theme we glanced a Baked Alaska making an appearance and began to summon up the courage to somehow fit one more plate in our expanding bellies.

This is a dish worthy of all the delicious calories, perfectly browned meringue, peanut butter ice cream and little chunks of raspberry jelly not quite old English fare but a damn fine dessert that is alone worth the trip.

It’s no surprise we loved the Legal Eagle so much, it may have been quite the extended flight to get here but this eagle is soaring Dublin’s bar food to new unseen heights and the journey is only beginning as an upstairs fine dining style restaurant is due open in the coming months.

Dinner for two with wine and a bottle of sparkling water came to €132.50