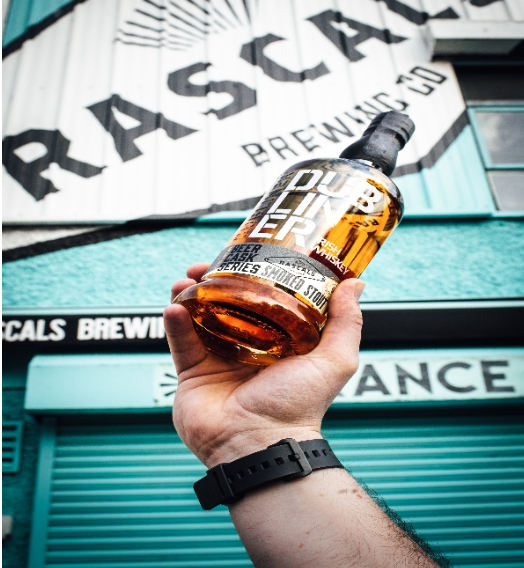 You will need to be quick though -The Dubliner Irish Whiskey Smoked Stout is a limited edition with fewer than 2,000 bottles on sale, available to customers in Ireland now online from www.thedld.com for €35.

This latest collaboration saw the award-winning Dubliner Irish Whiskey share their ex-bourbon whiskey casks with fellow Dublin neighbour and independent Irish craft brewer, Rascal’s Brewing Co. The crafty Dublin 8 brewery filled the casks with their high quality, unfiltered and unpasteurised beer, and after a few months of finishing, the beer was bottled.

The casks were returned to the Dubliner team, with each cask refilled with The Dubliner Irish Whiskey, allowing the flavours of the beer, having soaked into the casks, to seep into the three-year-old whiskey, creating a delicious blend that is set to excite whiskey and beer fans alike.

“We are excited to launch the Dubliner Smoked Stout Irish Whiskey in Ireland. This is the latest in our flavour work on the brand. Dubliner Irish Whiskey is committed to making Whiskey accessible for anyone to try. Big on flavour, it is sure to appeal to Whiskey and Beer drinkers alike.” Bronagh Hunt, Global Brand Director, Irish Whiskies.

There will be more releases from The Dubliner and Rascal’s in the coming months so keep your eyes peeled for more news soon – top tip: you will hear of the latest releases first by following the brand on Instagram @dublinerwhiskey.